One thing is clear: Azerbaijan will withstand the strikes and is able to counter along the entire perimeter of the border. 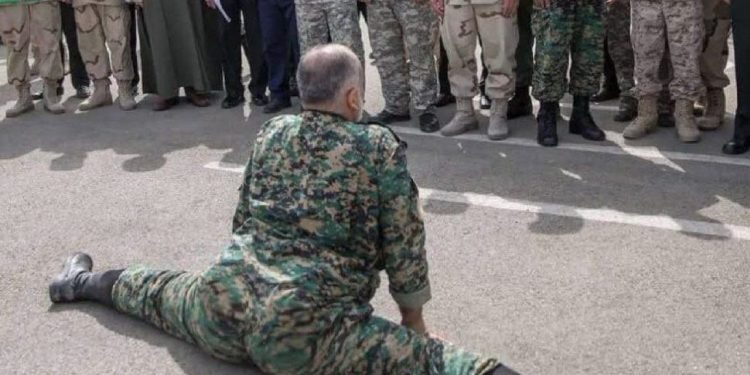 An Iranian warrior who, according to the Armenian dream, should attack Azerbaijan.

The IRGC is conducting exercises on the border between Azerbaijan and Armenia, in the north of East Azerbaijan Province of the IRI (bordering Ordubad District of the Nakhchivan Autonomous Republic of Azerbaijan, the entire Iranian-Armenian border, and Zangilan District of Azerbaijan). Up to 50,000 servicemen are expected to take part in the exercises, with the use of drones and artillery, with the installation of pontoon crossings across the Araz River.

It is clear from the description that these are offensive, not defensive exercises. As the location of the exercise clearly shows, the possibility of an attack on Azerbaijan or Armenia is being considered. Let us hypothetically consider both cases.

An attack on Azerbaijan

The territory from Zangilan to Fizuli is not populated, but it is the most militarized. The situation in Nakhchivan is different: the territory is populated, but also militarized. In other words, it will be difficult for the Iranian Armed Forces to advance. Strikes on the oil infrastructure near Baku and on other parts of the border are possible. One thing is clear: Azerbaijan will withstand the strikes and is able to counter along the entire perimeter of the border. The weapons and personnel of our armed forces have been tested, and they can destroy the entire Armenian military infrastructure in Karabakh while they are at it—no need to leave any paramilitary groups in the rear.

What and who will be our response?

– The rise of Iranian Azerbaijanis, that is, there will be consistent work behind enemy lines. This is not the same as the Iranian proxies in Azerbaijan, who will be neutralized within 24 hours. These are masses, tens and hundreds of thousands of people. No tales of “Zionist Satanists” will work on them.

– Within 24 hours, Turkey will join the war, along the entire perimeter of the Iranian-Turkish border and by entering the NAR. The reunification of Nakhchivan with the mainland Azerbaijan will become an existential necessity then.

– The UK’s support will be at the diplomatic level in the UN Security Council and through arms supplies.

– There will be no logistics problems as Georgia will support Azerbaijan by opening its airspace.

– Israel will not miss its chance to strike Iran’s critical infrastructure using Azerbaijan’s airspace. In the event of open aggression, Baku will give Israel what it has not given it for 30 years.

– Saudi Arabia and Pakistan may get involved. They could, say, pull their troops to the borders and divert the Iranian forces.

This is just a rough idea of how the first week may go. That is, aggression against Azerbaijan will be met with a response from at least a coalition of the states bordering Iran. It is important, trust me.

An attack on Armenia

Or shall we say, an invasion into the territory of Armenia.

In the face of Russia’s limited resources, Armenia is attempting to drift towards the West, thereby changing the geopolitical balance in the region. Over the past month, Iran has rushed to support Russia in Ukraine, and is going to support it in the South Caucasus. They do not trust Pashinyan; the latter’s attitude towards Russia speaks volumes to the Iranian leadership as well. The idea of Western forces on Iran’s borders sets the IRI mullahcracy in motion.

At the same time, there are Russian border guards on Armenia’s border with Iran, who may even help Iran cross the border and deploy in Zangezur. All this can happen in case of domestic instability in Armenia; it is no coincidence that Kocharyan was kowtowing to Tehran in his latest speech. Pro-Russian proxies with Russia’s limited contingent can stir up domestic instability in Armenia.

Who will step in for Armenia in case Iran attacks? This is a rhetorical question.

Iran’s show of strength indicates the weakness of all other forms of influence on the region. Iran is absolutely not an attractive state for the region, even for Armenia. I will leave the choice of the direction of the invasion to the readers and note only the scale of the consequences the Iranian leadership will have to face.