An agency for money laundering and hate speech: UNESCO now

Azerbaijan has repeatedly asked UNESCO to send a mission to monitor the state of cultural heritage sites in the territories of the country that were under Armenian occupation for the past 30 years. 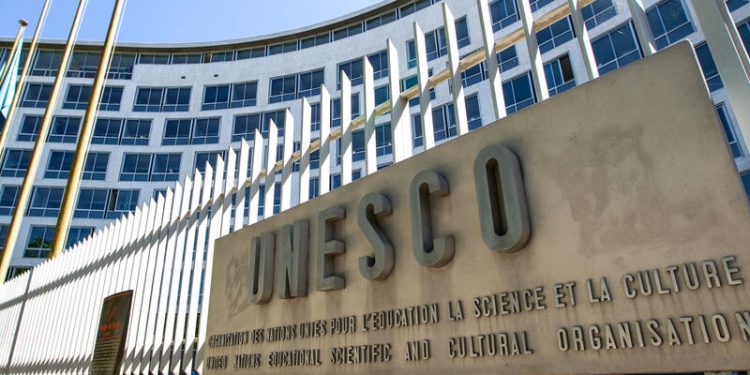 Unfortunately, all these requests remained unaddressed and today it is obvious that the organization simply does not care about what Armenians have done to the cultural heritage of Azerbaijan in Karabakh in the 30 years of occupation.

The organization is headed, as we know, by a Frenchwoman of dubious reputation, Audrey Azoulay, and France, which blindly supports Armenia in everything, has long shown its true colors. Both countries have bloody histories of massacres, genocides and occupations. No wonder UNESCO has a one-sided approach to Azerbaijan’s problems. The French, who are known for their, to put it mildly, dislike of Muslims, simply will not judge “their own”. How else can one explain the repeated refusals to investigate Armenian crimes against Azerbaijani cultural heritage in Karabakh? Moreover, Baku has repeatedly spoken out about the UNESCO’s questionable behavior, pointing out its bias and duplicity.

Moreover, given how many corrupt French politicians receive remuneration for their anti-Azerbaijani stance, it is not hard to understand why UNESCO treats the problem of destroyed and demolished Azerbaijani monuments in Karabakh in this one-sided manner.

Azoulay is well aware of everything

According to the report of the Cabinet of Ministers of Azerbaijan, appeals have been made to UNESCO and ISESCO, the UN Alliance of Civilizations, and the ministries of culture of 150 countries with regard to the acts of vandalism committed during the 44-day Patriotic War against our cultural heritage in the previously occupied territories, as well as missile attacks on Ganja, Barda and other settlements. Along with this, reports on the results of preliminary monitoring to determine the state of the cultural heritage in the liberated lands in the post-war period were sent to UNESCO.

You will recall that, unlike UNESCO, ISESCO immediately assessed the damage caused by Armenia to our country’s cultural heritage. UNESCO has repeatedly demonstrated politicization of issues and bias against Muslim countries. This is exactly why there was a need to establish ISESCO. The number of affected historical and cultural monuments runs into the hundreds. For many years, Madame Azoulay has been completely ignoring the cultural catastrophe that befell dozens and hundreds of Muslim sites in Karabakh.

It is as if she cannot see that during the years of occupation the Armenian side illegally built religious facilities in the territory of Azerbaijan. Numerous Armenian churches, khachkars and other places of worship were built in order to proclaim these lands as “ancient Armenian”. Today, Armenia is trying to exploit this issue, accusing Azerbaijan of allegedly destroying the “ancient Armenian” heritage, even though all this was illegally built in the last thirty years.

UNESCO is well aware of it all. But what is it doing about it? Nothing. Instead, the organization is busy siphoning off funds, like a drug cartel.

UNESCO is a mob

It has been proven by Inner City Press (ICP), a public organization whose purpose is to expose the financial machinations of major international organizations, banks, etc. It was ICP that found out about the serious violations being committed by Audrey Azoulay.

In April of this year, citing insider information from UNESCO’s Venice office, ICP wrote that the headquarters staff were seriously outraged by the complete lack of integrity on the part of Azoulay and the head of her office, Nicolas Kassianides. Reportedly, Azoulay, interested in the cultural events then taking place in Venice, instructed Kassianides and the staff of the Venice office to organize a cruise for herself, her husband and children, all disguised as ‘professional activity’.

Apparently, a whole yacht was rented for the family’s 5-day trip (paid for from UNESCO’s regular budget), with all the travel and expensive accommodation costs taken care of. Doing his best to conceal the fraud, Kassianides gave the order to take the funds for Azoulay’s vacation from the agency’s budget, instead of using them for the intended purpose. That is, we have here a definitely illegal siphoning off of the budget for personal whims.

Unfortunately for Azoulay, this budgetary manipulation did not go unnoticed. The financial misappropriation has become public, although French officials remain silent on the subject.

Furthermore, reportedly, the company that organized the vacation of Azoulay’s family could be owned by Russian businessmen. In other words, Azoulay is not just siphoning off the budget together with her young assistant, but is also violating international sanctions against Russia. The pair has effectively jeopardized and compromised both the financial credibility and the already dubious reputation of UNESCO.

ICP noted that such cases should be investigated within the legal framework of the United Nations.

“In recent times, several heads of UN agencies have resigned after their mismanagement, corruption and abuse of power files got exposed. Isn’t it time to investigate all cases of fraud against UNESCO programs and budgets or involving UNESCO staff?” asks the Inner City Press investigation, while also stressing that Azoulay should step down before her term ends.

The Ministry of Culture of Azerbaijan has repeatedly brought to the organization’s attention the consequences of Armenian terror. In particular, in one of his latest appeals, the newly appointed Minister of Culture Anar Kerimov stressed that in the territories of Azerbaijan that had been occupied by the Armenian armed forces for nearly 30 years and recently liberated by Azerbaijan, preliminary monitoring was conducted to determine the damage caused to the cultural heritage. The appeal highlighted the results of the preliminary monitoring of the damage caused to historical, cultural and religious sites of Azerbaijan in the territories that had been under Armenian occupation. It was emphasized that the destruction of historical and cultural heritage is a grave violation of relevant international conventions and a crime against humanity.

More than 70 mosques have been destroyed in Karabakh. Only a couple of mosques in Shusha and Aghdam have survived. No matter how the Armenian side justifies it, we know perfectly well that the mosque in Shusha was preserved only because of its location in the highest part of the city and its minarets, from which they could can monitor the surrounding area. They were used for military purposes. The mosque towering over the terrain in the completely destroyed Aghdam was preserved for the same purpose. The Armenian side used its minarets to make artillery adjustments. All other mosques were almost completely destroyed or used as cattle sheds.

In Shusha alone, more than 170 residential houses that were considered architectural monuments and about 160 cultural and historical landmarks were demolished. Houses of worship and mosques were desecrated and vandalized, and rare manuscripts were destroyed. Among them are the library and the Panah Khan Palace itself, Khan Sarai and Caravanserai, Upper and Lower Govhar Agha Mosques, Saatli Mosque, Vagif Mausoleum, Natavan’s house, Bulbul’s house-museum. The destruction of more than 400 monuments in the lands liberated from the Armenian occupiers has already been recorded.

The same fate befell other structures from the Muslim period—caravanserais, bathhouses, mausoleums, cemeteries—which were almost totally destroyed. Many of the churches that remained in the occupied territories also met an unenviable fate. The main victims were the Albanian churches, which were either converted into the Armenian style or destroyed.

Has UNESCO seen all these facts? Of course, it has, because Azerbaijan has repeatedly provided evidence, photos and videos of the occupiers’ vandalism. Has the organization done anything over the years? It has not! UNESCO’s silence has been so long that we already doubt its representatives’ ability to speak at all.

How many months has it been? So far, UNESCO has not lifted a finger. Instead of organizing the mission, Audrey was busy with personal recreation, paid for from the budget and the Armenian money, and God only knows what she was doing after that. She simply does not care about Azerbaijani heritage. UNESCO has long lost its weight. Today it is an agency for money laundering and hate speech.