Several signals about active preparation for a new war with Azerbaijan have been received from Armenia on September 29. These signals are so clear that there is no doubt about the Armenian government’s true intentions. 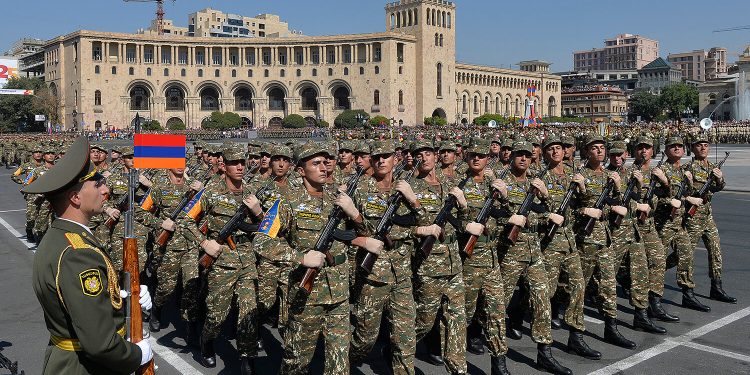 Armenian news agencies and Telegram channels have reported this morning that the Indian Defence Ministry had signed an agreement on a big order for the export of missiles, rockets and ammunition to Armenia. The amount of the order is more than $240 million.

In particular, it is reported that the order includes the supply of Pinaka multi-barreled rocket launchers, which are used by the Indian army. Taking into account that India has always had a special sympathy for the “country of stones”, this information is also true.

“We are looking for required weapons in all countries. India is one of such countries,” Chairman of the Armenian parliament’s standing committee on defence and security Andranik Kocharyan said.

Of course, Azerbaijan is absolutely confident in its own strength, army and weapons. Pinaka is not a “doomsday weapon”, it is not a tactical nuclear weapon to greatly damage Azerbaijan by the Indian Multiple Launch Rocket System (MLRS) or scare it. The Armenians could not scare us even with Iskander mobile short-range ballistic missile system.

We think that a couple of captured Pinaka rocket launchers [they will be surely captured, given the pathological habit of Armenians to throw equipment on the battlefield and desert] will be useful to our Pakistani allies for research. So, fussing with the Indians is an extra waste of money for Yerevan.

Then the information about a huge increase in the Armenian military budget, which will amount to $1.326 billion in 2023, which is about 56 per cent more than in 2022, went viral. This is an obvious fact that Armenia is plotting a new war.

We remind Azerbaijani President Ilham Aliyev’s statement made at a meeting dedicated to the results of the first quarter of 2022.

“Where does poor Armenia get so much money from?” the president said.

“Therefore, if money is allocated for the provision of Armenia with money, then we will perceive this as an unfriendly step and react accordingly,” the president clearly warned.

We are sure that Yerevan and its sponsors will hardly like Baku’s reaction. Both new and old.

Following these reports, information about the call-up of reservists, which will continue until November 22, 2022, went viral. Moreover, the recent three-month training of reservists for privates and officers, announced since August 1, 2022 had not been completed yet. This is also a sensitive moment. Why does Armenia train reservists? The answer is also obvious. They are required for the X hour, when Armenia will resort to a new military adventure against Azerbaijan.

In this context, it is necessary to remind that the Armenian military and political leadership has recently intensified armed provocations on the conditional border with Azerbaijan. In particular, the Kalbajar district has been recently shelled, as a result of which an Azerbaijani soldier was wounded. Response measures were immediately taken. Later the Armenian Defence Ministry informed about the death of three Armenian servicemen [according to reports from Armenian and other countries’ Telegram channels – one of them is the battalion commander].

The most outrageous thing is that all this is happening before Armenian Prime Minister Nikol Pashinyan’s trip to Prague, which is scheduled for October 6, 2022. According to our information, the Azerbaijani top leadership has also been invited to an informal EU summit in the capital of the Czech Republic. According to Caliber.Az’s informed sources, the Azerbaijani and Armenian sides were planned to thoroughly discuss the future peace treaty during the meetings.

However, all the above-mentioned aspects, an increase in the military budget, the purchase of Indian weapons and the call-up of reservists show that the Armenian side is sabotaging peace negotiations, not only delaying even the discussion of a future document, but also actively preparing for a new war.

Azerbaijan does not want war, which has been stated more than once at the highest level. We do not want war, but we are ready to crush Armenian revanchism in the bud.

“Armenia’s any attempts of revanchism will be resolutely rebuffed, it will face Azerbaijan’s “Iron Fist”,” President Aliyev warned.

We advise the Armenians to take President Aliyev’s warning seriously. Otherwise, if there is even the slightest threat to the security of Azerbaijan, its population and military personnel, then the Azerbaijani soldier reserves the right to personally carry out demilitarisation not only along the conditional border, as it has happened quite recently this month, but also in any other area of Armenia.