Armenian in the Service of the Kremlin: Margarita Simonyan, the ‘Iron Doll’ of Putin’s Propaganda

Simonyan – like many in the Russian elites – shows her inferiority complex towards the West when she complains about how Western leaders don’t understand Russia. 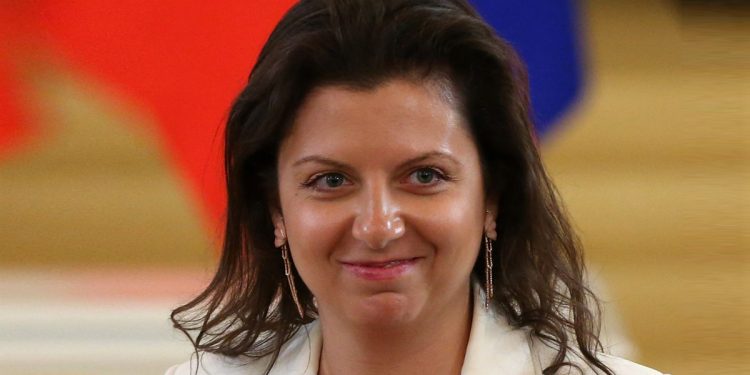 The West only came to understand the importance of Russian information warfare and disinformation as a strategic aspect of the Kremlin’s hybrid warfare after the 2014 crisis when it mobilised imperial nationalism and separatism in Crimea and the Donbas and provided Russia with proxy forces that would assist its invading army. But it took another eight years and Russia’s invasion of Ukraine for Western democracies to ban them after coming to finally understand the evil nature of Russian propaganda outlets like  RT, Sputnik and others in fomenting political instability, separatism and violence.

The two most well-known and radical women on Russian propaganda TV channels are Olga Skabeyeva and Margarita Simonyan, born into an Armenian family and made head of RT and Sputnik at the age of only 25. Both have been described as the ‘iron dolls of [Vladimir] Putin’s TV.’

Skabeyeva and Simonyan are sanctioned by the EU for ‘actions and policies which undermine the territorial integrity, sovereignty and independence of Ukraine. Simonyan ‘is a central ﬁgure of [Russian] Government propaganda,’ the EU stated who ‘promoted a positive attitude to the annexation of Crimea and the actions of separatists in Donbas.’

Simonyan is not psychologically unhinged; she is a Russian imperialist and Armenian nationalist.

Simonyan is also a racist, as seen when she supported a TV segment on RT in November 2020 which contained Simonyan’s partner and TV presenter Tigran Keosayanpartner and an actress in black faces posing as former United States President Barack Obama. Obama was portrayed as uneducated, illiterate, not up to the job of US president and more suited to be a rap musician.

Simonyan is not a cynic, she believes the Russian propaganda and disinformation that emerges from her lips. The bigger question is why an Armenians in Armenia and the Armenian diaspora are not critical about their fellow Armenian who is discrediting their country with outlandish and hawkish statements?

Or should we read this in a similar way to how the silence of the Russian people should be understood as supporting Russia’s invasion of Ukraine?  In other words, is the silence of Armenians also a sign they are in agreement with Simonyan’s outlandish and hawkish statements?

Simonyan – like many in the Russian elites – shows her inferiority complex towards the West when she complains about how Western leaders don’t understand Russia. ‘Lots of them can’t tell the difference between borsch and shashlik’ which, Simonyan explains, has rendered them unable to deal with Putin. ‘They’ve achieved the exact opposite of what they wanted. They don’t understand the mentality. And if they don’t understand it, they’re not able to predict the reaction.’

There are countless European and North American academic and think tank experts, programmes, and journals devoted to Russia and Eurasia.

There are no experts on Ukraine and other countries of the former Soviet Union in Moscow and the remainder of Russia. A major factor why Russia’s invasion of Ukraine has failed is because nobody in Moscow understands the country and sees it only through nineteenth century imperial nationalist myths and stereotypes. In March, Simonyan said to her horror a ‘considerable portion of the Ukrainian people have turned out to be engulfed in the madness of Nazism’ which de-codified meant Russia had miscalculated when it had believed Little Russians would greet Russian troops as ‘liberators.’

Simonyan seeks to make outlandish statements at every opportunity she can. Below are twelve topics which Simonyan, and RT and Sputnik which she controls, have propagated on behalf of the Kremlin. As can be seen, her statements and views on many topics support Russia’s genocidal war against Ukraine.

Firstly, Simonyan supports Russia’s totalitarian dictatorship and media censorship. Simonyan strongly backed the banning of Western social media from Russia’s Internet because they are ‘an instrument of war against Russia.’ Simonyan supports censorship in Russia because, she claims, ‘A big state cannot exist without control over information.’ Her grasp of these issues is at the level of elementary school.

Secondly, Simonyan has supported the Belarusian dictatorship and applauded the violent crushing of protests against election fraud. She has no problem with Alexander Lukashenka remaining in power as an illegitimate president. Simonyan applauded when Lukashenka sent jets to intercept a RyanAir commercial passenger plane to detain oppositionist Roman Pratasevich. Simonyan said: ‘I never thought that I would envy Belarus in any way. But now I somehow do envy. Lukashenka Similarly,, Simonyan does not support democratic change in her native Armenia and upholds Kremlin propaganda about colour revolutions in Georgia, Ukraine and Armenia being CIA plots against Russia. Armenian  Prime Minister Nikol Pashinyan, who came to power during the 2018 revolution, is supposedly a ‘traitor’ who is guilty for Armenia’s defeat in the  2020 Second Karabakh War.

Thirdly, Keosayan, also an ethnic Armenian, joined her to insult Kazakhstan as another fake country, like Ukraine. Traditionally pro-Russian Kazakhstan made them both persona non-grata. What has infuriated the Kremlin is that Kazakhstan and other Central Asian republics do not support Russia’s war against Ukraine and, looking to their own minorities, the Kremlin’s backing of separatism.

Fourthly, similar to Armenia, Simonyan is an enthusiastic supporter of Russia’s annexation of Crimea. Armenians have wrongly compared the supposed right of ‘self-determination’ for Crimea with that of Karabakh from Azerbaijan, ignoring the fact that international law defines self-determination as only applying to states, not to regions of countries.

Fifthly, Simonyan therefore supports Russia’s annexation of the Karabakh region of Azerbaijan. Armenia was defeated in the 2020 Second Karabakh War and lost control of Karabakh. Russian control over Karabakh is a second best option for Simonyan and other Armenian nationalists.

Sixthly, Simonyan’s double standards are always in plain sight, as when she condemned the US and Turkey’s attitudes to the 1915 genocide of Ottoman Empire’s Armenians while supporting Russia’s well-documented genocide against Ukrainians.

Simonyan attacks Jewish-Ukrainian President Volodymyr Zelenskyy,  whose many family members were murdered in the Holocaust, for ‘continuing the tradition of heroisation of Nazi criminals.’ Simonyan, like RT and Sputnik, propagate the myth of Ukraine controlled by ‘Nazis.’

Seventh, Simonyan has expressed strong support for Russia’s invasion of Ukraine. She tweeted: ‘This is a standard parade rehearsal, It’s just that this year we decided to hold the parade in Kyiv.’ She ridiculed anti-war protests in Russia, stating that ‘If you are ashamed of being Russian now, don’t worry, you are not Russian.’ Simonyan regurgitated Kremlin propaganda, claiming  ‘Nobody is fighting against Ukrainians! We’re liberating Ukraine!’

Simonyan, as with Russian fascists and White Russian imperialists like Igor Girkin, is calling for Russia to launch more deadly attacks against Ukraine. After the daughter of fascist Alexander Dugin was assassinated near Moscow, Simonyan called for Russia to bomb decision making centres in Ukrainian cities and towns.

Eighth, Simonyan covers up Russian war crimes in Ukraine. Simonyan has made multiple claims that Ukrainian doctors have called for Russian prisoners to be castrated and that Ukrainian ‘Nazis’ are ‘prepared to pluck children’s eyes out based on their ethnicity.’ Evidence collected by international human rights organisations have pointed to only Russia abusing the human rights of POW’s, including gruesome videos posted on social media of Ukrainian POW’s being castrated and beheaded.

Repeating the Kremlin’s disinformation Simonyan said, ‘No one is bombing peaceful Ukrainian cities!’ The port of Mariupol was completely destroyed by Russian soldiers with 50-,000 civilians killed. Simonyan discounted all claims of Russian attacks on civilians as fake news.

Ninth, Simonyan admitted that Russia was blockading the export of grain from Ukraine and creating a global famine as a means to pressure the West to end sanctions against Russia. At this year’s St. Petersburg International Economic Forum, Simonyan said ‘All our hope is in the famine,’ adding, ‘the famine will start now and they will lift the sanctions and be friends with us, because they will realise that it’s necessary.’

The use of food as a weapon follows in the vein of Stalin’s Holodomor (murder famine) in Ukraine that murdered four million Ukrainians. Former US Ambassador to Russia Michael McFaul, now at Stanford University, commented: ‘Let’s starve them until they agree to be our friends’ Such a pleasant person. And then Russians wonder why no one respects them!’

Tenth, Simonyan has called for Russian attacks on military transportation columns from NATO states to Ukraine. Russia should, Simonyan said, ‘shoot down aircraft transporting hardware, eliminate the ships that carry it from England as well as destroy airfields in NATO countries where these aircraft land.’

Eleventh, Simonyan is an enthusiastic supporter of Putin’s gambit to overturn the liberal world order. ‘I don’t see why you have the nerve to think that you know better than anyone how to run the world, and who’s marginal in the world and who isn’t. You’ve made so many mistakes, you’ve started so many wars in the last few years, destroyed so many lives, killed so many people, created so many problems.’ In Simonyan’s eyes, Russia is faultless and innocent, never having ever started an imperialist war, including in Ukraine which is not an invasion but a so-called ‘special military operation’ provoked by Ukraine, the US and NATO.

Finally and bizarrely, Simonyan is an enthusiastic supporter of unleashing World War III. She said Russia is already at war with NATO. Simonyan said, ‘Personally, I think that the most realistic way is World War III, based on knowing us [Russians] and our leader Vladimir Vladimirovich Putin, knowing how everything works around here, it’s impossible—there is no chance—that we will give up … We’re all going to die someday.’

Western citizens of democratic countries, including members of the Armenian diaspora in North America and Europe, should roundly condemn Simonyan, RT and Sputnik for following in the worst traditions of Stalinist and Nazi propaganda.

Taras Kuzio is a  Professor in the Department of Political Science, National University of Kyiv Mohyla Academy.