I would use the expression "irony of fate", if what we are going to talk about here did not concern the entire Armenian people, a people that is quite developed, very intelligent and, most importantly, has, like any other ethnic group, every right to a much better future than the one it has condemned itself to... 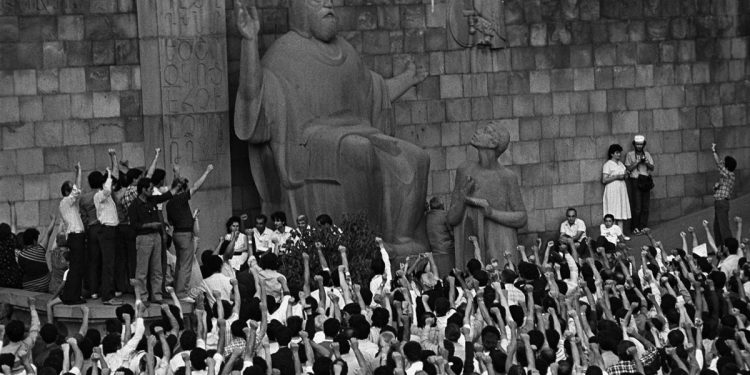 Between the Azerbaijani rock and the Russian hard place

Thirty years have passed, and these years, hard as it may be for Armenians to admit, turned out to be hopelessly lost.

For thirty years, Armenians have put up with a forced strategic partnership with Russia, which has been weighing them down, throwing them decades back and stifling their national potential.

For thirty years, Armenians have been saying to themselves, “Of course, Russia is slowing us down, of course, it ties us hand and foot. But if not the Russians, then THEY will come and take everything we have won with so much blood shed!”

For thirty years, Armenians have endured this “strategic partnership”, forsaking development and progress for the moment when the zero hour would come, and this unwanted, imposed strategic partner would protect them from THEM, not with words and exhortations, but by force of arms.

Sadly, it took Armenians thirty years to finally understand that all this time they had been living between the rock of Azerbaijani vengeance and the hard place of Russian guarantees.

And when the rock was raised, as one would expect, over the Armenian heads, the hard place cautiously backed away!

That is, in a nutshell, the tragedy of a nation who kept trudging along the road to a dead end for thirty years, encouraged by promises of support, and when they needed this support, they were once again abandoned.

I am not a citizen of either Azerbaijan or Armenia, I am a citizen of Georgia, who considers Baku a strategic partner and Yerevan a good neighbor. I admit that my judgments may seem abstract to some. But I am still going to tell you how it all looks from the outside.

“Don’t hurt a cub, because it may be a lion cub”

Thirty years ago, Armenia was astonishingly lucky: the chaos that reigned in Azerbaijan opened a truly gigantic window of opportunity for Yerevan, something that happens once in a few centuries in history.

Armenians, who were riding a wave of unity, consolidation and solidarity in the late 1980s and early 1990s and enjoyed the support of the powerful Armenians of Moscow, used this opportunity to the fullest, biting off far more than they needed and could digest historically.

Drunk on the euphoria of victories and opportunities, the leaders of “Artsakh” and “Greater Armenia” did not hear the voices of the few skeptics who cautioned that it was not very reasonable to snatch too much from their neighbor who was weakened by a total chaos. The chaos would end eventually, but indigestion would persist and become a chronic pain.

Afghans have a saying, “Don’t hurt a cub, because it may be a lion cub.” The most primitive, straightforward logic suggested that time would pass and Azerbaijan, who is larger, more populous and, most importantly, richer in natural resources, would definitely get back on its feet and demand the return of what was illegally taken from it under the slogans of “striving for the unity of the persecuted Armenian people”.

Alas, no one in Armenia, except perhaps one clever man named Levon Ter-Petrosyan, gave it a second thought at the time. Moreover, no one could see this danger.

Or wanted to see it.

The Armenians’ hope for stability and inalienability of the occupied Azerbaijani territories was based on two factors.

First, the purely chauvinistic conviction that Azerbaijanis, as a nation, are all tomato and carnation vendors, and should the need arise, “We’ll go to Baku and sort it out there…” (somewhat reminiscent of the Russian “We can do it again” broken by the Ukrainians, isn’t it?—T.A.) Admittedly, they also conceded that tomatoes or no tomatoes, but who knows that these Azerbaijanis might be capable of? And for that eventuality Armenia had the second, ironclad argument: the unchallenged, fearless and invincible army of Armenia’s strategic partner, Russia.

And so, for the sake of this proverbial “safety net”, in the event that the Azerbaijani tomato vendors suddenly mastered the tactics of combat operations, Armenia and the Armenians, who consider themselves a pro-European and even Aryan nation, were left to languish on the fringes of the Russian world as poor relatives, fed by the diaspora and the Armenian oligarchs of Moscow.

A nation with a unique, by Soviet standards, business potential was forced to throttle its natural entrepreneurial spirit and hew to the line of the Russian imperial policy, with all its inherent blemishes, such as corruption, the fusion of crime and the state, the inoperable governance system…

Instead of living and growing like Hong Kong, the Armenians agreed to live like Georgia and even worse, refused to integrate into Europe, began to support the Russian soccer team, calling it “ours”, as long as nothing would threaten their territories and as long as they did not have to return what they had taken from Azerbaijan but were unable to digest.

The enraged lion, Azerbaijan, did not miss its chance

For a long time, this inherently flawed plan worked, and Armenia was so convinced it would always work that it relaxed, began stealing from the treasury, stopped caring about the army, scattered to political corners, and lost its unity and cohesion…

Meanwhile, Azerbaijan was growing economically, building an army, training officers, in other words, growing the fangs of vengeance, so that at the right time it could throw its fist into the Armenian “window of opportunity”.

This is where I come to the events of 2020. Some may find everything written here to be complete nonsense, but again, this is exactly how it looks from the outside: the irresistible force met the immovable, tenacious and ideologically stubborn, object. In other words, Turkey became a counterweight to Russia.

History proves that Russia does not like to fight countries of its own “weight class”. Chechnya, Georgia, Syria, even Ukraine (or what Moscow understood as Ukraine)—these are fine. Any time.

But Turkey has the most combat-ready army in NATO…

“Do we really need this?” Russian generals shrugged their shoulders and forwarded this question to the civilians in the Kremlin. “For Armenia? For Pashinyan’s Armenia, which still can’t decide whom it likes best, Russia or the West?” And they came to the only possible conclusion and stepped aside in 2020, allowing Azerbaijan and Armenia to deal with each other one-on-one. And it quickly became clear that Yerevan stood no chance.

And then the South Caucasus began to change rapidly. This time Azerbaijan came out on top, and the earlier split in Armenia began to deepen precipitously, which is fraught with risk for the preservation of statehood in a country that has already lost the main battle…

After the 44-day war many things changed in the mass consciousness of the Armenian society. The hope for the inability of the “tomato and carnation vendors” to fight properly obviously evaporated, yet the hope for Russian military assistance did not. But that too died after another escalation on the Armenian-Azerbaijani border, when Pashinyan’s request for urgent military assistance was rejected by the CSTO countries.

By the way, the response was reasonable: this is not Kazakhstan, with a couple of thousand village troublemakers to send back to their homes, this is Azerbaijan and Turkey. In short, it would be beyond ridiculous to think that Moscow, being deeply bogged down in Ukraine, would waste even a single round of Kalashnikov ammo on rescuing Armenia…

In short, Yerevan has once again been left high and dry. And this is like a sign from above. Armenia’s entire 30-year foreign policy has suffered a severe and, apparently, final collapse. All Armenia can do now is not fight the reality but come to terms with it: sit at the negotiating table with Azerbaijan, open the borders with its neighbors, and look for its place in Europe, this time for good.

And if Armenia does not want to lose another thirty years, this should have been done yesterday…