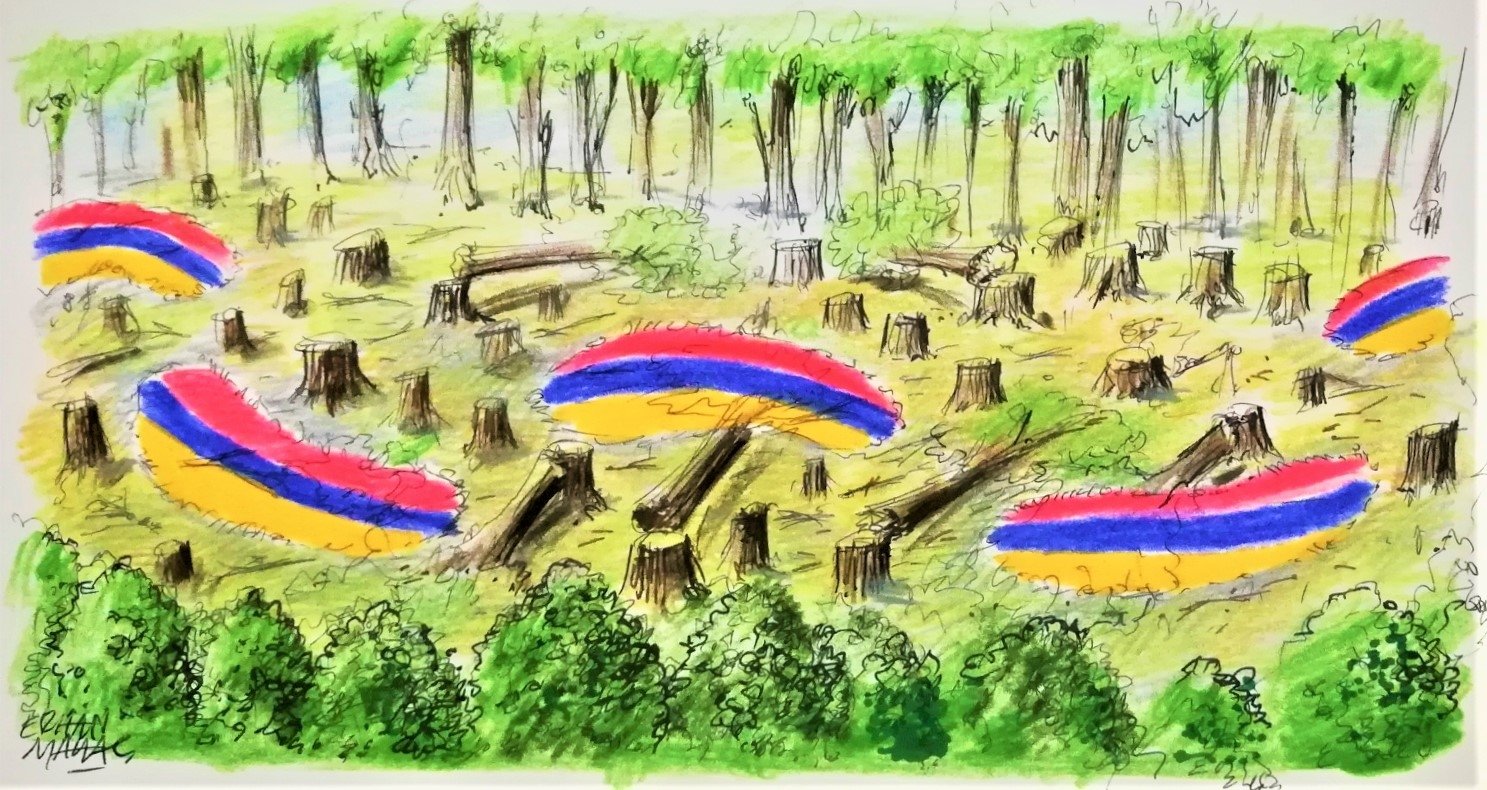 The world’s understanding of security differs across time and, in our modern world, the rapid pollution of the environment, the depletion of drinking water resources and global warming caused by the brutal abuse of nature by humans pose a greater threat than wars.

For this reason, environmental issues and global warming were some of the most important items on the agendas of the recent G-7 and G-20 leaders’ summits.

When we evaluate the occupation of Azerbaijani territories from an environmental point of view, we can see that today the region is facing very serious environmental, water supply and pollution problems.

During the decades-long occupation, the waters, forests and natural resources of this region were used not only illegally, but also brutally, causing serious harm to the environment and humanity. It has been determined that more than 100,000 trees were cut down in the occupied territories.

Trees were being felled even during the Armenian retreat from the Lachin and Kalbajar regions of Azerbaijan. During the period of occupation, Armenia blocked the rivers and prevented the flow of water to the Azerbaijani side.

Moreover, during the 44-day war, the occupier attempted to use natural resources as a tool of war, trying, contrary to international law, to cause a humanitarian and ecological disaster in the region by firing missiles at Azerbaijan’s Mingachevir Dam, oil and gas resources and pipelines.

One of the most important environmental problems of the region is the pollution of the transboundary Okchuchay River (Armenian: Voghji River) by Armenia. The Okchuchay, with a length of 84 kilometers (52 miles), rises in west Zangezur and flows into east Zangezur, which was liberated from occupation during the 44-day war.

After the liberation of east Zangezur, the Ministry of Ecology of Azerbaijan conducted monitoring in the river and discovered that the level of pollution of the Okchuchay River is higher than other border rivers.

The amount of nickel is seven times higher than the norm, iron four times and copper-molybdenum compound two times higher. According to an evaluation by the U.N. Economic and Social Council (ECOSOC) dating back to 2007, the ecological and chemical status of the Okchuchay River system is “not satisfactory for aquatic life … Industrial activities are the main pressure factor.”

Data from Armenia’s Ministry of Ecology proves this. According to data, the Okchuchay is one of Armenia’s most polluted rivers and has been classified as Class 5 in terms of pollution, the highest possible level. Research by Armenian experts (A. V. Gabrielyan, G. A. Shahnazaryan and S. H. Minasyan, 2018) found that the root causes of the river’s pollution were lack of management and planning, poor operating experience and inadequate waste management.

All the research results above were confirmed during a period of management by a German company. Most of ZCMC’s shares (60%) belonged to Germany’s CRONIMET Mining AG until 2019. Meanwhile, the managing partner of CRONIMET, 83-year-old Gunter Pilarsky, has a close connection with Armenia and has served as an honorary consul of Armenia in the German state of Baden-Württemberg since 2006.

Pilarsky’s name also appears on a list of Armenia’s paid lobbyists in Germany. According to The USA Tribune, until the autumn of 2020, Germany was one the main countries where Armenian lobbying organizations were engaged in attracting corrupt lawmakers.

Threat to the biological security

Water pollution has altered the river’s ecosystem; many fish species have been killed and some have disappeared altogether. The metals discharged into the Okchuchay pollute not only the river itself but also other nearby rivers. The Okchuchay flows directly into the Aras River, the second largest river of the South Caucasus, thus it is directly affected by the pollution from the Okchuchay.

According to Iranian experts, despite Armenia accepting responsibility and committing to repair and refurbish facilities to completely clean up the rivers, no action has yet been taken. With this gross violation of international protocols and conventions, more pressure should be put on Armenia for polluting this and also the Aras River.

The Aras River is the largest right tributary of the Kura River, and together they form the most important water resources of the South Caucasus, flowing into the Caspian Sea. These two rivers also affect the water quality of the Caspian as they flow into the inland sea. Therefore, the cleanliness of these rivers concerns all Caspian coastal states for fishing and other reasons. According to the Caspian Convention, coastal states have a duty to protect the environment and biological assets in the Caspian Sea.

Drinking water supply is an issue that occupies the global agenda. The European Environment Agency, of which Germany is a member, noted the following regarding freshwater resources: “Good management of this limited and valuable resource is essential for the well-being of people and nature.”

The U.N. and the World Health Organization (WHO) list the following statistics on water pollution: Over half the global population do not have safely managed sanitation services; around 2 billion people live in countries with high levels of water stress; and, by 2025, half the world’s population will live in a water-stressed environment; about 785 million people do not have basic drinking water services.

Access to clean water is associated with better education, income and health. Diseases from dirty water kill more people every year than all forms of violence, including war. According to the U.N. and WHO, every $1 invested in clean water can yield $4-$12 in economic returns.

The Okchuchay is an important domestic and irrigation resource of the eastern Zangezur economic region of Azerbaijan. It is an important water source for the development of this region after its liberation.

The Republic of Armenia signed the Protocol on Water and Health, part of the 1992 UNECE Convention on the Protection and Use of Transboundary Watercourses and International Lakes (Water Convention), on June 17, 1999. Since signing the protocol in 1999, Armenia has twice initiated the process of ratifying the protocol.

However, the Ministry of Foreign Affairs has some reservations about the ratification process, taking into consideration the “polluter pays” principle and the reference to the convention in Article 13.2 of the protocol.

The ministry has suggested revising the aforementioned reference information on the ratification of the protocol and clearly states that: a) the principle of “polluter pays” in the protocol is applied only within the country, and cannot serve as a basis for the claiming of compensation by downstream countries in case of transboundary impacts; and b) the reference to the convention mentioned in Article 13 is applied only to those countries that are at the same time parties to the UNECE water convention.

Another important aspect of the statement is that nations have the responsibility to ensure that activities within their jurisdiction or control do not cause damage to the environments of other states or of areas beyond the limits of national jurisdiction. This implies consultations between neighboring countries, instead of compensation payments by upstream countries to downstream countries for the damage caused. Therefore, Armenia has consciously avoided signing the convention, thus failing to take responsibility for, but on the contrary benefitting from, the issue of pollution of the environment and water resources.

To sum up, mining activities in Armenia heavily damage the region’s aquatic ecosystem. Owing to the presence of a German company here, Azerbaijan expected a reaction from the German government.

Unfortunately, however, there was no official reaction from Germany against the pollution of water and the environment in the region. In 2019, Armenian authorities opened a criminal investigation into the Kajaran Mine Operating Company. This investigation had only a political purpose, and a Civilnet investigation report in 2019 noted that a co-owner of ZCMC, concealed through third parties, was Mikael Minasyan, a former ambassador of Armenia to the Vatican and a son-in-law of former Armenian President Serzh Sargsyan. Sargsyan was overthrown in the 2018 revolution and remains a political rival of Prime Minister Nikol Pashinian.