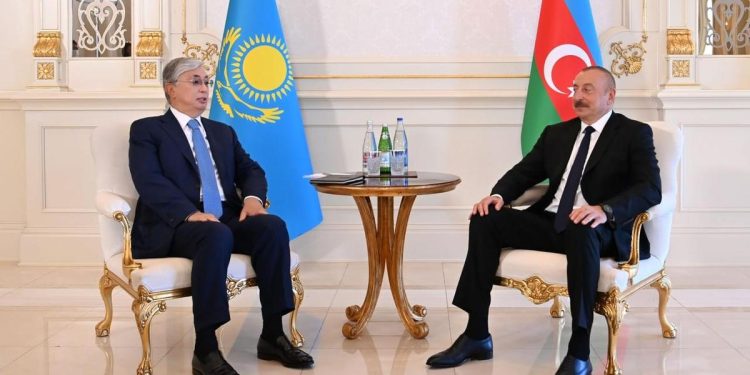 Judging by the rich agenda of negotiations of the two heads of states, the results of Tokayev’s stay in Baku have indicated a multi-vector prospect of development of the Azerbaijani-Kazakhstani relations in many spheres of economy, strengthening the allied ties even more deeply.

More than ten important documents signed by the leaders of the countries point to the beneficial result of this visit. They include, in particular, the Declaration on Strengthening Strategic Relations and Deepening Allied Interaction between the Republic of Kazakhstan and the Republic of Azerbaijan, the Protocol on Establishing Twinning Relations between the cities of Turkestan and Shusha, etc.

In a word, the agreements reached between the countries testify that the strategic partnership and allied cooperation, which are, in fact, the basic aspects of Azerbaijani-Kazakhstani relations, will raise the interrelations between Azerbaijan and Kazakhstan to a new, higher level in the foreseeable future. Taking into account that Tokayev’s visit is attached great importance both in Baku and in Nur-Sultan, let us try to set the main accents of this important event.

It is obvious that the strategic partnership and allied cooperation between Azerbaijan and Kazakhstan is the main component of bilateral relations. And it is very symbolic that the visit of the president of Kazakhstan to Azerbaijan took place on the eve of the 30th anniversary of diplomatic relations between the two countries. In Baku, President Tokayev emphasized that Kazakhstan and Azerbaijan have passed a long way – in fact, they started from scratch, and today they confidently state about strategic partnership and alliance. He drew attention to the fact that the word “strategic” is binding, it needs to have a concrete meaning, and concrete content, and it is necessary to work on it.

This approach is also shared in Baku, i.e. in practice implementing such an important political thesis and being guided by a balanced state policy and a balanced strategic course in general in relations with Kazakhstan. Presentation of Kazakhstan’s highest order “Altyn Kyran” – “Golden Eagle” by Tokayev to Aliyev is the obvious evidence of it. Tokayev, presenting this high award to Aliyev, described it as a sign of solidarity of the Kazakh people with the policy pursued by Azerbaijan, noting that it also fully meets the national interests of the people of Kazakhstan.

A friendly gesture from Kazakhstan and Baku’s response

Another friendly gesture from Kazakhstan addressed to our country was its initiative to build Kurmangazy Art School in the city of Fuzuli. The two presidents familiarized themselves with the project of the Kurmangazy Centre for Creative Development of Children. Construction of the two-story, 3,100-square meter building of the Centre, designed to accommodate 600 students, is scheduled to begin in September this year and be completed in December 2023. Interestingly, the centre’s key areas of work will include vocal and musical instruments, robotics, 3D modelling, web design, photography, and video-making. In addition, crafts will be taught, including carpet weaving and pottery, as well as various types of sports and choreography. On the two-hectare property, buildings will be constructed in accordance with modern architecture and an amphitheatre will be built. In a word, all conditions will be created to reveal and develop children’s creative potential. The gift of friendly Kazakhstan to Azerbaijan is of special importance for every Azerbaijani, as it is timed to the second anniversary of our country’s long-awaited victory in the 44-day-long Karabakh war with Armenia. Azerbaijan greatly appreciates the fact that since the restoration of our independence, Kazakhstan has constantly supported our country’s territorial integrity within the framework of international organizations, both during the occupation and after the Second Karabakh War.

“We in Azerbaijan know very well and appreciate it very much”, Ilham Aliyev said, noting this fact. It is also important for us that Kazakhstan closely observes the processes taking place in Azerbaijan in the current post-conflict period, and express its readiness to make some contribution to Karabakh’s revival and construction. As President Tokayev has rightly noted, Karabakh and Eastern Zangazur are dynamically regenerating, and it is due to the personal efforts of the Head of the Azerbaijani State that the region will turn into a prosperous land in the near future. This does not cause any doubts. This is a given, which one way or another, everyone will have to accept.

Another point is worthy of special attention. After receiving a gift from Kazakhstan in the form of the Centre for Creative Development of Children, which is seen in Baku as another element in the humanitarian cooperation between our countries, Azerbaijan has made a friendly gesture in return. On the eve of President Tokayev’s visit to Azerbaijan, one of the central streets of Sumgayit was named after prominent Kazakh figure, enlightened, and Turkologist Akhmet Baitursynov. Another pleasant surprise awaited Tokayev in the Seaside National Park, where on the occasion of the 30th anniversary of the establishment of Azerbaijani-Kazakh diplomatic relations a “Kazakh yurt” was installed. But that is not all. The real and long-awaited surprise for our peoples was the document on the twinning of the cities of Shusha and Turkestan, signed at the first meeting of the Kazakh-Azerbaijani Business Council, and alongside this, the second document on the twinning of the cities of Mingachevir and Uralsk.

On the Turkic factor

The fact that Azerbaijan and Kazakhstan have a multifaceted agenda is evidenced not only by the documents signed but also by the close cooperation and mutual support of our countries in various international organizations. Such interaction is especially significant within the Organization of Turkic States. Let us recall that the Organization of Turkic States was established on 3 October 2009 under the name of the Turkic Council. On 12 November 2021, during the summit of the Cooperation Council of Turkic Speaking States in Istanbul, the Turkic Council was renamed the Organization of Turkic States. Azerbaijan and Kazakhstan along with Türkiye in this organisation play a leading role in terms of promoting the interests of Turkic peoples and the Turkic factor in regional and world politics in general. Therefore, we can confidently say that Azerbaijan’s landmark victory in Karabakh, which put an end to Armenia’s occupation of Azerbaijani territories, was a turning point not only for us but for the entire Turkic world. By restoring its territorial integrity, our country has raised the status of the Turkic factor to a new level, which is very important in the current period of restructuring of the global order.

The results of President Tokayev’s visit to Baku confirmed that Azerbaijan and Kazakhstan are aimed at further multilateral cooperation in various areas of trade, economy, and energy, as well as in cultural and humanitarian spheres. The transport-logistics area, which will enable to conduct of more export-import operations, was also chosen as one of the priorities. President Aliyev spoke about the great potential for this in his press statement on 24 August.

It is also worth noting here that during the Kazakh president’s visit, at the first meeting of the Kazakh-Azerbaijani Business Council, agreements were signed between the state agencies of the two countries, and some specific business endeavours were agreed upon. In particular, agreements on cooperation were concluded between the Foreign Trade Chamber of Kazakhstan, on the one hand, and the Azerbaijan Export and Investment Promotion Agency (AZPROMO) and the Confederation of Entrepreneurs of Azerbaijan, on the other. A memorandum of understanding was approved between the Agency for Development of Small and Medium Enterprises of Azerbaijan and Food City Alliance with QazTrade JSC of Kazakhstan, and relevant partnership agreements were signed between ADY Container LLC and KTZ Express Hong Kong LLC. It should be added that implementation of the signed documents as well as consistent steps taken by the governments of Azerbaijan and Kazakhstan to deepen bilateral relations will purposefully promote increased mutual investments and mutual benefit of our states.

Taking into consideration Armenia’s ungrounded territorial claims towards Azerbaijan and the generally close attention to the processes taking place in our country, we expected an unhealthy interest of Yerevan towards the visit of President Tokayev to Baku. As a rule, Armenia reacts negatively to any events relating to Azerbaijan, especially to Karabakh, especially after its de-occupation. It is clear that both Tokayev’s visit and Baku’s increasing cooperation with Nur-Sultan are perceived negatively in Yerevan. This is evidenced by the Armenian side’s painful reaction to the twinning of Turkestan and the city of Shusha. However, Armenia is well aware of Kazakhstan’s position on the territorial integrity of Azerbaijan, so Yerevan did not dare to do more.

Commenting on the results of the visit of President Tokayev to Azerbaijan, Kazakhstani political analyst Arman Shorayev told Caliber.Az that the visit of the Kazakhstani leader to Baku is one of the most important and significant events of the current year for Kazakhstan, without any exaggeration.

“In general, this visit is historic for both our countries. Many important documents have been signed, which are of mutual interest. As for the political aspects of the visit, for Kazakhstan, which is wholly dependent on Russia for the transportation of oil and oil products, the implementation of the important Trans-Caspian corridor between Kazakhstan and Azerbaijan is not only a matter of diversification of transport routes but also the removal of economic and political dependence on Moscow. I am confident that the agreements reached will continue to strengthen Kazakhstan’s independence, among other things. Undoubtedly, the transport corridor will also allow Azerbaijan to get the shortest access to markets and goods from China, which is also important for your country.

Regarding other political aspects, I would like to emphasize the awarding of the highest state award of Kazakhstan – “Golden Eagle” – “Altyn Kyran” Order to President Aliyev, and our President has clearly stated that the head of the Azerbaijani state has been awarded for the restoration of historical justice and de-occupation of Karabakh. I think this serious political gesture was a resounding slap in the face to the Armenian elite, which confirmed Azerbaijan’s unequivocal support for the restoration of territorial integrity and inviolability of its borders.

The fact that Turkestan and the city of Shusha are twinned is also a demonstration of Kazakhstan’s political determination, as is the fact that a super modern school will be built in Fuzuli on behalf of the Kazakh people.

To sum up the results of this visit, I would highlight the fact that the ideas of Turkic unity, which before seemed fantastic, are in fact taking shape as a triangle of Azerbaijan, Kazakhstan, and Türkiye. Moreover, it is noteworthy that Kyrgyzstan and Uzbekistan are also proponents of the format.

The transport corridor from Azerbaijan to Türkiye will give the opportunity to unite our borders through the Caspian Sea, which, figuratively speaking, becomes for Kazakhstan and Azerbaijan the sea of true friendship and partnership, and this is also a serious message that the Turks are becoming a serious force, and that our interests should be taken into account by the opponents of the Turkic world, ” the Kazakhstani expert said.