Deportation of Azerbaijanis from the Armenian SSR (1948-1953). Part I. Second-class citizens 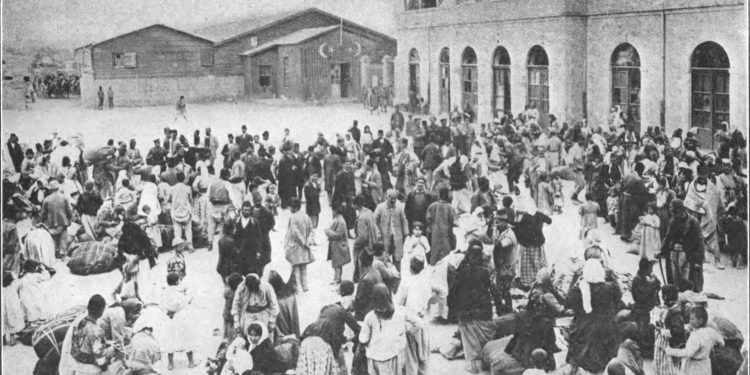 Before and during the war, ethnic deportations were carried out for two reasons: foreign impact and domestic impact. The population affected by the operations of the former type included all foreign nationals, as well as Soviet citizens representing the peoples with whose titular states the USSR bordered or was at feud or at war. In this case, deportation served a preventive, prophylactic purpose, so to speak. The classic examples here were Poles, Germans, Finns, Romanians, Iranians, Meskhetian Turks.

The population affected by the operations of the latter type included the people who had no titular state. Their deportation served internal purposes. The best examples of this are Kalmyks, Chechens, Ingush, Karachai, Balkars, Crimean Tatars, i.e., the so-called punished peoples. The latter were expelled completely—not just from their historical homeland, but from all other regions and cities, and discharged from the army.

These ethnic deportations were happening all over the country, that is, the displacement of these peoples was total. Losing their homeland, these peoples were also deprived of national autonomy, i.e., relative statehood.

An example of ethnic deportations after the war is the resettlement of Azerbaijanis from the Armenian SSR in 1948-1953. It can hardly be regarded as the same as the deportation of Chechens, Ingush, Karachai, Balkars and other peoples to Kazakhstan and Central Asia, as in this case, they were resettled to a republic where they were being added to the titular ethnic group, and they were to live not in reservations, the so-called special settlements, but in regular conditions.

Still, it was a deportation, since it was being carried out against the will and wishes of the majority of the deportees, disrupting the usual, habitual rhythm of life of tens of thousands of people, forcing them to adapt to a new environment, new way of life and new occupations.

The issue of resettlement of the Azerbaijani population from Armenia to Azerbaijan was closely linked to the attempts of the Soviet leadership at expanding the country’s borders in the south after World War II at the expense of the Turkish territories. As part of this endeavor, active work was conducted among the Armenian communities in the USA, Europe, Latin America, and Near and Middle East with the purpose of repatriation of Armenians to their “historical homeland”.

As a result of repeated petitions (May, July, October, November 1945) of the First Secretary of the Central Committee of the Communist Party of Armenia Grigory Arutinov to Joseph Stalin, the Council of People’s Commissars of the USSR adopted the decree “On measures for the return of Armenians from abroad to Soviet Armenia” on November 21, 1945, timing it to the 25th anniversary of the Sovietization of Armenia.

In a related move, the Catholicos of All Armenians addressed the religious figures of the diaspora on November 27, 1945, imposing on them the “particularly important responsibility to use their authority and speaking talent” to facilitate the successful implementation of these measures. The Catholicos appealed to the Big Three—the Soviet Union, the US and Great Britain, asking them to pressure Turkey into returning the “Armenian territories” to Soviet Armenia.

In turn, the possibility of mass repatriation gave the leadership of the Armenian SSR a good reason to count on expanding the borders of the republic at the expense not just of the Turkish territories but also of the neighboring Azerbaijan. This is why the First Secretary of the CC of CP Armenia Grigory Arutinov proposed in his letter of November 1945 to Stalin taking Nagorno-Karabakh from the Azerbaijan SSR and annexing it to Soviet Armenia. The First Secretary of the CC of CP Azerbaijan Mir Jafar Baghirov responded with the counterclaim to annex the Azerbaijani-populated regions of Armenia to the Azerbaijan SSR in exchange.

This made the Armenian side take the issue off the agenda for a while. When it became clear in late 1945 that the dream of reclaiming the “land of their forefathers” now owned by Turkey was impossible to fulfill either, the Armenian leadership began to weave a new spiderweb of intrigue. The First Secretary Arutinov sent to Moscow complaint after complaint, saying that they had no accommodation or food for the repatriates, who had been invited to Armenia with the new potential territories in mind (over 300,000 Armenians were expected to return in the original repatriation plan, but only 90,000 came to Soviet Armenia in 1946-1948).

Apparently, that was when the idea was born of making up for the broken Armenian dreams to expand the “historical homeland” by humiliating and trampling upon the rights of the Azerbaijani minority in Armenia. Thus arose the problem of relocating the Azerbaijani population from Armenia to Azerbaijan.

It is obvious that the idea of this project belonged to the Armenian leadership and was supported by Moscow. However, to present this campaign as non-violent and purely voluntary, Moscow had to arrange it so that the initiative would come directly from the republics who had agreed on the matter beforehand.

Here is an example from the archives—a draft of the joint letter of the leaders of the Azerbaijan SSR and the Armenian SSR M.J. Baghirov and G. Arutinov dated December 3, 1947 to Stalin, outlining the justification of the necessity of relocating the Azerbaijani population from Armenia to Azerbaijan.

It says: “Upon exchange of views on certain issues arising from the economic changes that have occurred in the Azerbaijan SSR and the Armenian SSR over the recent years, we appeal to you with the following proposal. New lands being taken from under irrigation with the implementation of the Mingachevir system and the shortage of labor force in the existing collective farms, cotton-producing regions, as well as the objective of increasing the cotton yield, put to the forefront the necessity of increasing the population in these regions of the Azerbaijan SSR. Resettling the Azerbaijani population of Armenia, 130,000 people in total, to these regions could be a practical solution to this problem. The resettlement of the Azerbaijani population from Armenia to Azerbaijan would significantly ease the conditions of admission and accommodation of the Armenians returning to the homeland from foreign countries. The lands and housing vacated as a result of the resettlement of the Azerbaijani population may be used to accommodate the peasants from the number of Armenians arriving in Armenia from abroad.”

However, this document had no outgoing number and no personal signatures of the leaders of the two republics, and only the Armenian copy was dated.

The document revealed the typical hypocrisy of the Soviet system. It indicated the necessity of resettlement on a voluntary basis but used imperatives: “shall be resettled.” The relocated population was given benefits and credits but they were stripped, virtually without compensation, of all their immovable assets, first and foremost, personal houses inherited from their fathers and grandfathers. The deportation of Azerbaijanis from Armenia was set in motion.

The text of the document, which that had no introductory part and began straight with the resolution, was prepared hastily. The reason of this haste is evident in the final, 11th paragraph of the decree: “The Council of Ministers of the Armenian SSR shall be allowed to use buildings and houses vacated by the Azerbaijani population in connection with the resettlement of the Azerbaijani population in the Kur-Araz Lowland of the Azerbaijan SSR to accommodate Armenians arriving in Armenia from abroad.”

Interestingly, by the time this decree was published, the first wave of new migrants had already begun to cross the administrative border of the Azerbaijan SSR of their own accord and look for places to live in the regions removed from the Kur-Araz Lowland. Such instances were registered starting from late December of 1947 in Gadabay, Gazakh, Shamkir, Ganja, Goygol and other regions.

To prevent these unorganized instances of resettlement of Azerbaijanis from Armenia, the cable from the Chairman of the Council of Ministers of the Azerbaijan SSR T. Guliyev and the First Secretary of the CC of AzCP(b) M.J. Baghirov dated March 3, 1948 instructed the chairmen of regional executive committees and secretaries of regional committees of the Party not to allow individuals and families relocating from Armenia without authorization to be accommodated in the collective farms of the regions.

However, despite the actions taken, according to the reference of the head of the Resettlement Department under the Council of Ministers of Azerbaijan N.D. Allahverdiyev dated August 1, 1951, more than 1,000 households abandoned public property, left the collective farms of the Armenian SSR in an unauthorized and unorganized manner and without resettlement tickets and moved to certain regions of the Azerbaijan SSR in 1948-1951.

Such migrants from Armenia also included those who officially petitioned to the local authorities for resettling them to the territory of a specific region. In most cases, such requests were approved. However, since those migrants were not entitled to the benefits provided for by the decree of the Council of Ministers of the USSR dated December 23, 1947 for the population resettled to the regions of the Kur-Araz Lowland, the living conditions of the population relocating without authorization were unbearable.

By the decree of the Council of Ministers of the Azerbaijan SSR dated February 2, 1948, the chairmen of the regional executive committees of the Salyan, Saatli, Sabirabad, Ali-Bayramli, Pushkin, Aghjabadi and Khilly regions were instructed to carry out extensive outreach work in collective farms on the order, conditions and economic and political significance of resettlement for the purpose of timely preparation of all work related to the voluntary resettlement of 10,000 collective farmers and other Azerbaijanis from the Armenian SSR to the Kur-Araz Lowland of the Azerbaijan SSR in 1948.

The resettlement plan was finalized in the text of the decree of the Council of Ministers of the Azerbaijan SSR dated May 13, 1948. According to this decree, 2,757 households, or 12,177 people, were to be resettled in 1948 from the Spandaryan and Stalin districts of the city of Yerevan, as well as from Basarkechar, Vedi, Artashat, Noyemberyan, Hoktemberyan, Zangibasar and other regions of Armenia.

From Yerevan alone, 105 households, 400 people in total, were resettled to the collective farms of Absheron. The plan implied that not a single Azerbaijani was to remain in the Etchmiadzin, Hoktemberyan and Beria regions as early as in 1948. Moreover, as follows from the decree of May 13, 1948, the lack of real opportunities to accommodate all settlers in the regions of the Kur-Araz Lowland forced the leadership of the republic to instruct the chairmen of the NKAO Regional Executive Committee, the Baku City Executive Committee and the Executive Committees of the District Councils of Workers’ Deputies of Mashtaga and Azizbekov districts of the city of Baku, Gadabay, Khanlar, Shamkhor, Safaraliyev, Kasum-Ismail, Kuba, Geokchay, Aghjabadi, Barda, Salyan and Aghstafa regions to prepare the known empty houses for accommodating the migrants.

Earlier, in response to the requests from Baku about the possibility of accommodating the migrants, information had been prepared by representatives of the local authorities of Samukh, Karyagin, Khudat, Siyazan, Khizi, Tartar, Zangilan, Pushkin, Imishli, Salyan, Neftchala regions, as well as the Nakhchivan Autonomous Soviet Socialist Republic and NKAO. In their reports, the local authorities mainly made it look as if there was an urgent need for labor force.

In general, the documents show that the geography of the planned resettlement of new migrants in Azerbaijan covered almost all regions of the republic.