As we know, until the establishment of the Nagorno-Karabakh Autonomous Oblast (NKAO) by the decision of the central government of the USSR on July 7, 1923, the mountainous and lowland parts of Karabakh constituted a single whole. After 1923, a new reality emerged in the mountainous part of Karabakh. 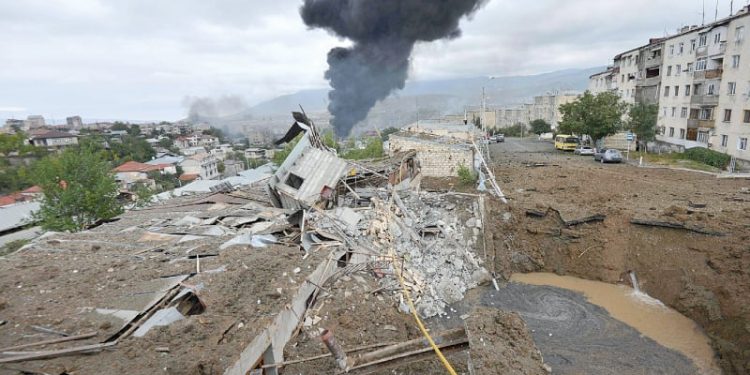 That reality lasted until September 2, 1991, when the fictitious so-called “Nagorno-Karabakh Republic” was declared in the territory of the NKAO and Shaumyan (now Goranboy) district of Azerbaijan. As a result of Armenia’s occupation policy, the “NKR” occupied 7 surrounding districts of Azerbaijan in 1991-1994 and included them in its “borders” (having failed, however, to occupy Goranboy). Neither the “NKR” nor its “borders” are recognized by any country of the world today.

The Nagorno-Karabakh conflict began to take shape in 1987 around the talk of “economic discrimination” invented by Armenians (more on this in another article on Azlogos[1]). However, the Nagorno-Karabakh Autonomous Oblast, which had existed before the establishment of the “NKR”, was closely linked with the economy of Azerbaijan. During the Soviet period, the standard of living in Nagorno-Karabakh was higher than the average standard of living in all of Azerbaijan. For example, when comparing the indicators of economic and social development in the regions of the Azerbaijan SSR in 1965-1987, it becomes clear that the number of people employed in industry per 10,000 people was 686across the country, 387in the Nakhchivan Autonomous Soviet Socialist Republic, and 657 in the NKAO. In 1972, Nagorno-Karabakh accounted for 2.3% of the industrial production of the Azerbaijan SSR. Between 1971 and 1986, the increase of industrial production throughout the country was threefold, while it more than tripled in the NKAO. 15 new industrial production facilities were put into operation in the NKAO in those years. In addition, the NKAO was leading in terms of per capita agricultural output. Although NKAO made up 5.1% of the territory of the Azerbaijan SSR, it provided 6% of the country’s total agricultural output in the early 1970s. Viticulture and winemaking were particularly thriving here. Of course, the interaction between NKAO and other regions of the Azerbaijan SSR played an important role in achieving this level of economic performance.[2] One might say that the conditions created by the state were turning the NKAO into an agro-industrial center, with the surrounding regions as its raw material suppliers. For comparison of living conditions in the social sphere, the number of hospital beds per 10,000 people in the Armenian SSR was 86.2, in the Azerbaijani SSR 97.7, and in the NKAO 101.7. Also, compared to the average of the USSR, the Armenian SSR and the Azerbaijani SSR, the number of libraries, clubs and movie theaters here was 3-4 times higher. The central government of the Azerbaijan SSR also made capital investments in the NKAO. For example, in 1968-1979, 24-26 million rubles were invested annually (1 dollar was 0.82 rubles at the official USSR exchange rate in 1971 and 0.69 rubles at the 1978 exchange rate). Thanks to this financial assistance, the Sarsang Reservoir was built on Tartar River in Mardakert (Agdara) region (note that water in this reservoir, built at the expense of Azerbaijan, was cut off by Armenians after the First Nagorno-Karabakh War, causing the drying up of Tartar River and problems with water supply in the surrounding regions). A typical illustration of the attitude towards Armenians in Azerbaijan is, for example, the fact that 20.5% of students in all higher education institutions and vocational schools in the country were Armenians of the NKAO. Armenians were also represented in high government offices. That is, there was no such thing as discrimination against Armenians in the Azerbaijan SSR. Still, they repeatedly (in 1945, 1965, 1977 and 1988) raised the issue of urgent annexation of the NKAO to Armenia. When this issue was first raised in 1945, the Azerbaijani side proposed annexing to the Azerbaijan SSR the Armenian regions with the majority of Azerbaijani population: Vedi (now part of Ararat Province), Garabaglar (abolished in 1951 and annexed to Vedi Municipality) and Azizbekov (renamed Vayk Municipality in 1990-1995, now part of Vayots Dzor Province) in exchange for annexing Nagorno-Karabakh (except Shusha) to Armenia. Of course, this did not suit Armenians, and after a while the issue was dropped off the agenda. It is no coincidence that Azerbaijanis living in Armenia were first subjected to mass deportation in 1948-1953.[3] However, despite all the territorial claims of the Armenians and their anti-Azerbaijan actions, not only were the local Armenians not deported until the events of 1987-1988 (massacres of Azerbaijanis in Kafan region of Armenia in November 1987, of Armenians in Sumgayit, Azerbaijan, in February 1988), they were not discriminated against in the slightest.

Interestingly, the Armenians of the NKAO, who claimed that they wanted better living conditions, unilaterally declared their “independence” in 1991 but never achieved those living conditions. According to the Borgen Project’s 2019 report on global poverty and hunger, 21.6% of the population in the “Nagorno-Karabakh Republic” live under the national poverty line of $2.40 USD a day out of which over 6.1% live under the national extreme poverty line of $1.60 USD a day. The population in the areas previously inhabited by Azerbaijani IDPs is particularly poor.[4]

As it is not officially recognized by any country of the world (not even by Armenia), the “NKR” cannot establish economic relations with these countries. Local products are exported under the “Made in Armenia” label. There are foreign investments in the country, but they are illegal.[5] This makes the future of investment uncertain. An official written question sent by Azerbaijan to the Parliamentary Assembly of the Council of Europe in 2007 (Doc. 11145-23 January 2007) says that some 69 foreign companies from the United States, Canada, France, Germany, the United Kingdom, Russia, Portugal, Switzerland, Australia, Argentina, Lebanon, the Netherlands, Greece, Cyprus, Hungary and a number of CIS countries operate in the occupied territories of Azerbaijan (i.e., the “NKR”) illegally without any permission from official Baku. These companies are mainly engaged in the exploitation of gold and other precious metals and minerals, as well as forests and other natural resources. The document says that 35% of the occupied lands of Azerbaijan were leased to foreign companies for 20 years.[6] Unfortunately, some of the countries in which these companies are based are in the OSCE Minsk Group (the three co-chairs USA, France, Russia and members Germany, the Netherlands, Portugal). Mr. Ilham Aliyev, President of the Republic of Azerbaijan, pointed out in a video conference on the results of 2020 that companies engaged in illegal activities in the occupied territories of Azerbaijan would be prosecuted. The President also said that if these companies paid for the damage they caused to Azerbaijan, the case may not be taken to the international court.[7] Thus, we can assume that in the coming years, not only will the investments of foreign companies operating in the “NKR” drop, but they will also suffer great losses.

In 2014, 58.6% of total foreign investment in the “NKR” belonged to Russia, making Russia the largest investor here. This is especially true of Russian Armenians. 17,000 foreign tourists also visited here in 2015, most of them from Russia, especially Russian citizens of Armenian descent.[8]

Felix Tsertsvadze (2005) estimates the population of the “NKR” at about 123,000. The author also mentions the number of Armenians living in other countries (for example, 650,000 in the United States, 250,000 in France, 200,000 in Iran, 150,000 in Lebanon, 120,000 in Syria, 532,000 in Russia, 437,000 in Georgia, etc.) and wonders, rhetorically, why Armenians never established a state for themselves in those countries and only made territorial claims against Azerbaijan. After all, Armenians have long been accustomed to appropriating the lands of other countries where they live compactly. For example, after the Ottoman-Russian wars, in 1779, several tens of thousands of Armenians who had migrated from Crimea (Ottoman Empire) were inspired by ​​Archbishop Joseph’s idea and built a town called “Nakhichevan-on-Don” in the area where they settled in Russia. After getting land, tax incentives and various privileges from the central government, they demanded autonomy, but Tsarist Russia did not grant it, and the territory was later annexed to Rostov-on-Don.[11]

Thus, although the Armenians’ habit of appropriating foreign lands and establishing a “state” there extended to Azerbaijani lands, they failed to realize these aspirations properly. The “Republic” they established has been able to survive so far mainly owing to foreign aid. A number of great powers, including the United States, who have provided significant foreign aid each year since 1998, have been major sponsors and financial backers of the “NKR”. This assistance is allocated to humanitarian purposes, in particular to infrastructure, agriculture and medical projects.[12] Foreign investors, on the other hand, were simply engaged in the exploitation of the region’s natural resources and did not make any contribution to improving people’s living conditions.

After the 44-day Second Nagorno-Karabakh War, which lasted from September 27 to November 9, 2020, Azerbaijan was able to liberate 7 districts and part of Nagorno-Karabakh that had been under Armenian occupation for many years. The so-called “NKR” no longer exists physically, just as it never legally existed on the world map. Nagorno-Karabakh and the surrounding districts are now facing a completely new reality. This new reality includes restoration and rebuilding of the region from the ground up, construction of modern industrial enterprises and other socio-economically significant facilities, transformation of the region into one of the most developed regions of Azerbaijan. Armenians living in the rest of Nagorno-Karabakh under the control of Russian peacekeepers (in practice, outside the control of Azerbaijan) can benefit from the conditions that will be created here by accepting the Azerbaijani government. Armenians must understand that economic cooperation is more beneficial to them than war with Azerbaijan. The day they realize this, the economic situation and living conditions of both the Armenians of Nagorno-Karabakh and Armenia will improve. Even during the First Nagorno-Karabakh War, former President of Azerbaijan Abulfaz Elchibey first proposed (in 1992) that despite all the violence committed by Armenians (Khojaly genocide, etc.), new power lines from Azerbaijan to the west should pass through Armenia. He said, “Armenia and Azerbaijan are like two people locked in separate cells of a big Soviet prison. We have become free, we have broken away from Russia. There can be no true peace in the Caucasus as long as Armenia remains vassal to Russia”.[13] Had Armenia stopped the occupation in time and accepted Elchibey’s proposal, there could be oil and gas pipelines, railway and other transport lines going through Yerevan today instead of Baku-Tbilisi-Ceyhan, Baku-Tbilisi-Erzurum and Baku-Tbilisi-Kars.

Despite all the shed blood and hostilities, Azerbaijan today puts forward a new proposal for Armenia to consider. This proposal includes Armenia’s recognition of Azerbaijan’s territorial integrity, assistance in completing the demarcation without border tensions, opening regional communication lines, and activating the Azerbaijan-Armenia-Turkey transit corridor linking Russia, Europe and countries of the Far East. The foundation of the Azerbaijani part (Horadiz-Agband railway line) of this transit line, which could be call the Zangezur Corridor, was laid in February 2021, and the construction of infrastructure began in May.[15],[16]

Thus, if Armenia does not repeat the mistakes of the 1990s, the South Caucasus can become a place of peace and cooperation with the involvement of the country’s constructive forces. This can lead to the emergence of new economic projects that will bring Azerbaijan and Armenia together, attract foreign investment to both countries, especially to the Nagorno-Karabakh region, and, most importantly, create a win-win situation.

Cautious optimism in Azerbaijani-French relations: The view from Baku

The 30th anniversary of Azerbaijan with great success