Foreign Minister Jeyhun Bayramov has said that Azerbaijan is not interested and cannot be interested in tension with Armenia. 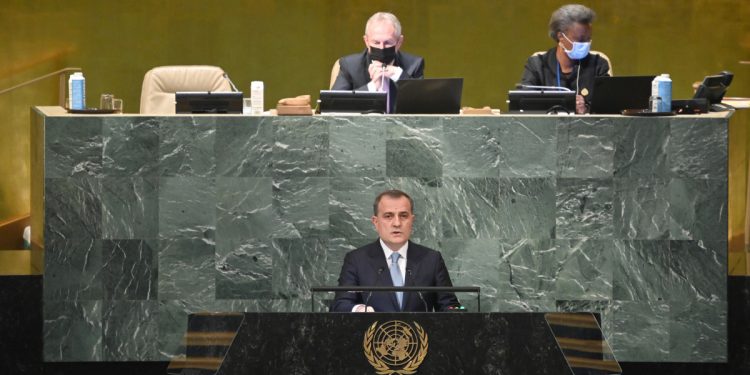 He made the statement during a speech at the 77th session of the UN General Assembly on September 24, Report informs.

“We hope that Armenia will finally join the negotiations constructively and sincerely,” he said.

The minister said that despite Armenia’s reckless actions, Azerbaijan has shown maximum restraint, goodwill and sincerity in restoring the ceasefire.

“After the provocation of the Armenian Armed Forces on September 12-14, 2022, Azerbaijan is engaged in eliminating the humanitarian consequences and in this context declared its readiness to unilaterally return the remains of the fallen soldiers to Armenia and informed the International Committee of the Red Cross about it,” Bayramov stressed.

“In fact, recent fighting has taken place near areas where large-scale post-conflict investments and reconstruction projects are being carried out. In addition, the recent tensions are very consistent with the picture that we have seen in Armenia over the past 30 years. Every time Armenia resorts to serious provocations, avoiding responsibility for making the necessary decisions in order to make a breakthrough at a crucial stage. I would like the current leadership of Armenia not to follow the path of its predecessors and close the window of opportunity for peace and security in the region again,” he said.

The foreign minister stressed that Azerbaijan is determined to overcome any threats to its sovereignty and territorial integrity, as well as the security of its citizens, and called on Armenia to refrain from further escalation of the situation.

“Armenia should constructively participate in the normalisation process in order to create a stable situation in the region by establishing friendly neighborly relations. In this context, according to the agreement reached at the fourth meeting of the leaders of Azerbaijan and Armenia with the president of the EU Council held in Brussels on August 31, 2022, Azerbaijan confirmed to the Armenian side that it is ready to start practical work on this issue. Immediately after the meeting, we offered Armenia a specific date and venue for these negotiations,” the minister said.

He added that Azerbaijan, having liberated its territories from years of military occupation, is determined to direct all its efforts to reconstruction and restoration in accordance with the highest standards.

Azerbaijani Foreign Minister Jeyhun Bayramov made a National statement at the 77th session of the UN General Assembly.

According to the Report, the minister touched upon the relations between the UN and Azerbaijan, spoke about Armenia’s aggression against our country and the Second Karabakh War. The foreign minister also touched upon the topic of the coronavirus pandemic.

The minister recalled that based on this successful experience, Azerbaijan initiated the global company “Peace for Culture” in 2021: “We hope that this initiative will be successful and we call on countries to join it.”

Bayramov, stressing that the long-term challenges in the form of a pandemic underlined the need for solidarity among the countries of the world, spoke about Azerbaijan’s activities within the framework of the chairmanship of the Non-Aligned Movement. He noted that Azerbaijan has provided assistance to more than 80 countries in the fight against the pandemic.

According to him, the modernisation of the economy is being implemented in the country in order to make the transition to green energy.

“At the same time, Azerbaijan remains a reliable supplier of energy resources to international markets. Azerbaijan is rebuilding villages and towns in the liberated territories from scratch, this territory has been declared a green energy zone,” Bayramov said.