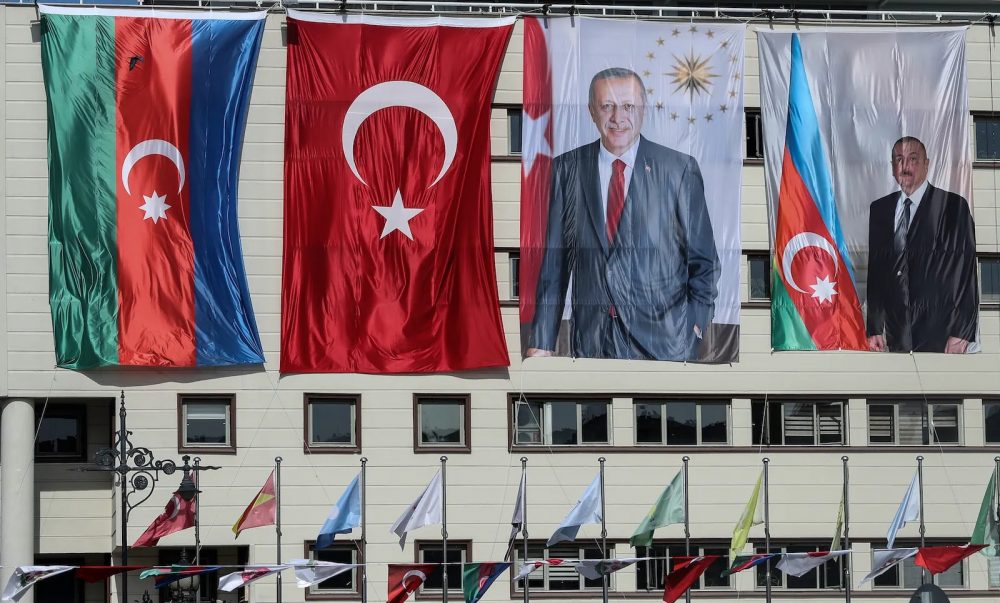 The national flags of Azerbaijan (left) and Turkey, and portraits of Turkish President Recep Tayyip Erdogan and Azerbaijani President Ilham Aliyev (right), hang side-by-side on the mayoral building in the Kecioren district of Ankara on October 21, 2020. Photo: AFP / Adem Altan

“Our vision of Azerbaijan-Turkey relations is absolutely clear: we are brothers and friends, we are allies. Last year in Shusha we actually formalized what had already been achieved between our countries. By signing the Shusha Declaration, we officially became allies. Once again, it was just a formalization of the reality, because Azerbaijan and Turkey have been acting like allies for many years. We highly value this level of cooperation, partnership and brotherhood,” said Ilham Aliyev at the international conference “Along the Middle Corridor: Geopolitics, Security and Economy”.

The President of Azerbaijan stressed that the two countries combine their potential. “Together we are stronger… The potential of our countries is growing. Not only economic and industrial potential but military potential as well. And today’s world demonstrates that this is factor number one for any country. If you don’t have strong military forces, you will probably suffer bitter days. Investments in the defense infrastructure, joint initiatives, joint military trainings—we regularly have more than ten military trainings with Turkey during one year, both in Turkey and in Azerbaijan. As I said, this is a very important factor of regional stability and our security. All those who have hostile plans against Azerbaijan and Turkey should know that Turkish army is not only Turkish army but also our army, and our army is not only our army but also Turkish army. And all those who plan provocations on our borders, trying to frighten us, should never forget it,” Ilham Aliyev pointed out.