In Istanbul, the members of the OTS called for deepening economic cooperation and praised the role of the pan-Turkic organization toward this purpose. 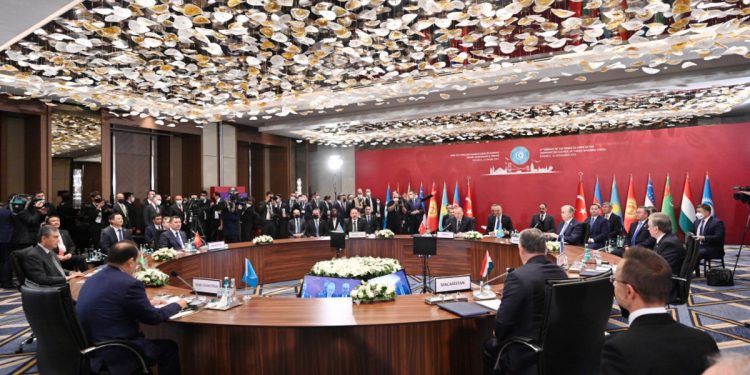 On November 12, Istanbul hosted the eighth summit of the Cooperation Council of Turkic Speaking States (Turkic Council), attended by the leaders of member states Turkey, Azerbaijan, Uzbekistan, Kyrgyzstan and Kazakhstan, and of observer states Hungary and Turkmenistan (Turkkon.org, November 12). The summit, dedicated this year to the theme of “Green Technologies and Smart Cities in the Digital Age,” covered a wide range of issues concerning the members and the future of the institution; and it also witnessed a series of important decisions. Above all, the official name of the grouping was changed to the “Organization of Turkic States” (OTS), and Turkmenistan officially joined the OTS as an observer.

The agenda of the summit also included the adoption of new regulations on the statuses of observer and partner states, an update to the charter of the organization’s advisory Council of Aksakals (in Turkish: “Wise Men”), the establishment of the Turkic Investment Fund, and approval of the “Turkish World 2040 Vision” document (a.k.a. “Concept-2040”), which was proposed by Nursultan Nazarbayev, the former president of Kazakhstan and the honorary chairperson of the OTS. “Concept-2040” was adopted to delineate the priorities, evolution and direction of the organization for the next two decades, charting medium- and long-term goals as well as guiding future cooperation in various fields where the Turkic states have common interests (Turkkon.org, November 12).

According to the newly adopted regulations, only countries with a Turkic language as the state or official language at the national level can obtain observer status with the OTS (Author’s interview with an official of the OTS, November 16). The observer status was more open until now; for instance, it was granted to Hungary in 2018, although its language does not belong to the Turkic family. The new regulation basically means that no more states will receive observer status, since all countries that presently meet this criteria are already either members or observers of the OTS. Previously, a number of states, including Russia, Ukraine and Afghanistan, declared interest in joining the organization.

Accession to full OTS membership for new states is likewise restricted. Membership status is open only to Turkic-speaking countries, according to the founding document of the Turkic Council—the “Nakhchivan Agreement” (Turkkon.org, October 3, 2009). Thus, according to current geopolitical realities, Turkmenistan is the only state that could vie to become a member of the organization in the future. The new regulations effectively make the OTS “a closed organization” (Author’s interview with an official of the OTS, November 16), which will generate conditions for more intensive cooperation amongst the member states as manifested by the “Istanbul Declaration” and “Concept-2040,” adopted at the eighth summit of the institution (Turkkon.org [1][2], November 12, 2021).

The establishment of “Partner Status,” which was not envisaged by the “Nakhchivan Agreement,” is meant to compensate the restrictions posed on full membership and observer status, and thus create a legal framework for cooperation with third parties and institutions. This status will be offered to “states that are willing to contribute to concrete projects,” according to Azimov Mirvokhid, the current deputy secretary general of the OTS (Twitter.com/AMirvokhid, November 16). It can be expected that the organization will offer this status to countries like Russia and Ukraine, which have previously declared interest in cooperation.

In Istanbul, the members of the OTS called for deepening economic cooperation and praised the role of the pan-Turkic organization toward this purpose. President Shavkat Mirziyoyev of Uzbekistan, noting the two-fold increase in his country’s trade with the other OTS members in recent years, called for further intensification of economic exchange amongst the member states and substitution of “products from third countries in our markets for goods that can be produced in the member states of the organization” (President.uz, November 13). The summit participants proposed a number of initiatives to promote their economic relations: inter alia minimizing existing trade barriers, introducing electronic commerce, and promoting connectivity projects like the East-West International Trans-Caspian Middle Corridor, of which the Zangezur corridor (linking mainland Azerbaijan with Nakhchivan and onward to Turkey) is a key part (President.uz, November 13; Turkkon.org, Turan.az, November 12).

Furthermore, the summit demonstrated the solidarity of the member countries on the most fateful issues faced by them. It declared support for Azerbaijan’s post-conflict rehabilitation, reconstruction and reintegration efforts in the Karabakh region; the settlement of the Cyprus issue based on the ethno-political realities on the island; and efforts of the Kyrgyz Republic to find a peaceful solution to the situation on the Kyrgyzstani-Tajikistani border. The member states also commended Hungary for upgrading its relations with all Turkic States to a strategic level and supported Budapest’s proposal to convene a joint Heads of States Summit of the Organization of Turkic States and Visegrad Group (V4) during its rotational V4 presidency (Turkkon.org, November 12).

During the summit, President Ilham Aliyev of Azerbaijan was awarded the “Supreme Order of the Turkic World” in recognition of Azerbaijan’s victory in the Second Karabakh War (September 27–November 10, 2020). The liberation of the Azerbaijani territories in and around the Karabakh region as a result of this war was declared of great significance not only for Azerbaijan but also for the entire Turkic World (President.az, November 12).

At the summit, the chairmanship of the organization passed from Azerbaijan to Turkey. The ninth summit of the OTS will be held next year, in Uzbekistan.