The prospects for strengthening the bilateral political dialogue were considered in Baku at a meeting between Prime Minister Natalia Gavrilița and Speaker of Azerbaijani Parliament Sahiba Gafarova. 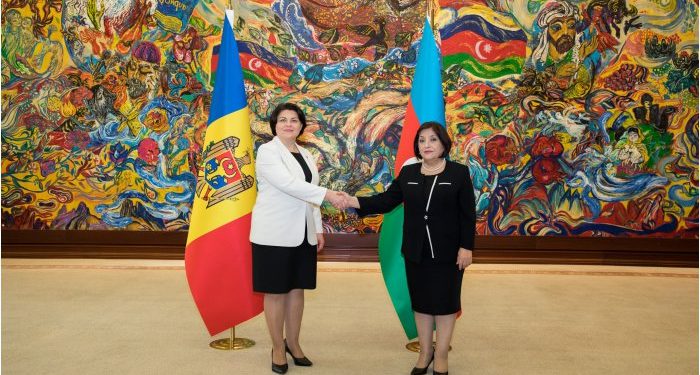 Officials appreciated the open and constructive nature of Moldovan-Azerbaijani political relations and the activity of Moldova-Azerbaijan Interparliamentary Friendship Group, the government’s communication and protocol department has reported.

In this context, the official pointed out the dynamism of cooperative relations between the two states, including by boosting the exchange of high-level visits – in February, Speaker Igor Grosu paid an official visit to Azerbaijan. Also, the prime minister emphasized the need to maintain an active political dialogue, especially on the inter-parliamentary platform.

“I’m glad to be here, with friends, because friends are the ones who help each other to overcome the difficulties and crises that have arisen. I firmly believe that our visit here, to analyze the actions taken and those that require more involvement in the future, will open a new chapter in the relations between our countries”, Gavrilița said.

Sahiba Gafarova thanked the Government and citizens of Moldova for the solidarity they showed in relation to Ukrainian citizens of Azerbaijani origin who fled the war, especially for hosting them and providing the necessary logistical support. The speaker voiced confidence that the dialogue between the two countries can be deepened: “I am convinced that this visit will bring good results for both countries. We have a beautiful history of friendship, which dates back to the 90s, when diplomatic relations were established between the Republic of Azerbaijan and the Republic of Moldova, two countries that became free and independent”.

Currently, the Republic of Moldova has signed about 50 agreements with Azerbaijan in the investment, trade, education, health, justice sectors etc.

On 10-12 October Gavrilița is on an official visit to Azerbaijan.