The young generation of the Turkic world should have the opportunity to study in their mother tongue in the countries of their residence. Unfortunately, majority of the 40 million Azerbaijanis living outside Azerbaijan are deprived of these opportunities. 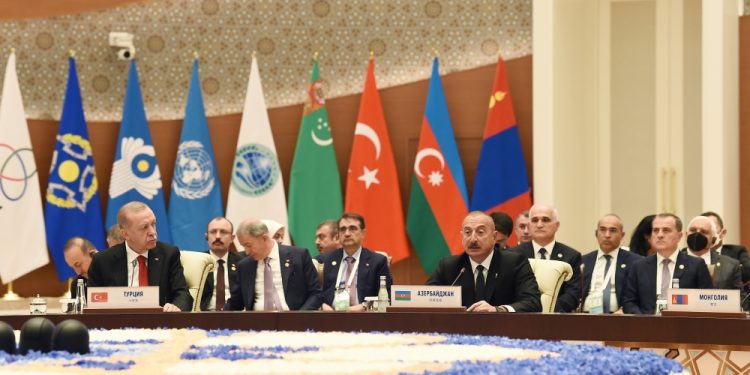 The 9th Summit of the Organization of Turkic States has been held in Samarkand on November 11.

President of the Republic of Azerbaijan Ilham Aliyev attended the event.

Dear Heads of State and Government,

I am visiting brotherly Uzbekistan for the third time in the last seven months. In April, I paid a state visit to Uzbekistan and in September I participated in the Summit of the Member States of the Shanghai Cooperation Organization. I am very happy to be in Samarkand again today.

I would like to express my gratitude to President Shavkat Mirziyoyev for the organization of the Summit of the Organization of Turkic States at a high level and for the hospitality.

I would also like to thank brotherly Turkiye for the successful chairmanship of our organization for the past year and wish success to brotherly Uzbekistan during its upcoming chairmanship.

The strengthening of relations with Member States of the Organization of Turkic States in all fields is one of the top priorities of Azerbaijan’s foreign policy.

Starting from the Nakhchivan Summit of 2009, our organization has covered a long path of development.

The Turkic world is a large family. Taking each other’s national interests into account, we must continue to show mutual support and solidarity.

In addition to the political, economic, commercial, cultural, transport, energy, digital transformation, agriculture and tourism, we should also activate our cooperation in the fields of security, defense and defense industry.

The Turkic world does not consist of independent Turkic states only, its geographical boundaries are broader. I believe that the time has come to permanently keep in mind, within the framework of the organization, issues such as preventing the assimilation and protecting the rights, security and national identity of our compatriots living beyond the countries that are members of the Organization of Turkic States.

The young generation of the Turkic world should have the opportunity to study in their mother tongue in the countries of their residence. Unfortunately, majority of the 40 million Azerbaijanis living outside Azerbaijan are deprived of these opportunities.

Education of our compatriots living outside Turkic states in their mother tongue should always be on the agenda of the organization. Necessary steps should be taken in this direction.

This week, the Azerbaijani people proudly celebrated the second anniversary of the liberation of Karabakh and Eastern Zangazur from Armenian occupation. Two years ago, we put an end to the 30-year occupation of Azerbaijani lands, restored historical justice and international law. By doing that, Azerbaijan also itself implemented the relevant resolutions of the UN Security Council.

Although the 30-year occupation is over, its severe consequences are still there. Nine cities and hundreds of villages of Azerbaijan were wiped off the face of the earth by Armenia. Aghdam, once a large and prosperous city, has been destroyed to an extent that foreign experts call it the Hiroshima of the Caucasus. During the occupation, Armenia destroyed 65 out of 67 mosques, while the remaining two mosques were seriously damaged and used to keep pigs and cows. This is an insult to the entire Muslim world. Islamophobia and Turkophobia form the basis of Armenia’s official ideology.

During the occupation, Armenia planted more than a million landmines in our territories. In the two years since the end of the Patriotic War, about 270 Azerbaijani citizens have been killed or seriously injured in mine explosions.

Azerbaijan is carrying out large-scale reconstruction work in the territories liberated from occupation. We have started the implementation of the “Great Return” program to return former internally displaced persons to their native lands.

Turkish companies are actively involved in many infrastructure projects in this process as contractors. My dear brother, President Recep Tayyip Erdogan visited the liberated territories three times and has been to Shusha, Fuzuli, Zangilan and Jabrayil.

I am also inviting the heads of other Turkic states to Karabakh and Eastern Zangazur. Using this opportunity, I express my gratitude to the President of Uzbekistan Shavkat Mirziyoyev and President of Kazakhstan Kassym-Jomart Tokayev for the school to be built by Uzbekistan and the creativity centre to be built by Kazakhstan in the liberated Fuzuli district. These are the manifestations of brotherhood between Azerbaijani-Uzbek and Azerbaijani-Kazakh peoples.

Although two years have passed since the end of the Second Karabakh War, Armenia continues to commit military provocations on the border. In the latest one, in September, the Armed Forces of Azerbaijan had to launch a resolute counter-offensive operation to repel yet another military provocation by Armenia.

In order to misguide the world public opinion, Armenia is trying to baselessly accuse Azerbaijan of military aggression. We categorically reject these groundless claims. We fought on our lands, defeated the Armenian army and expelled them from our ancestral lands. Today, we are also in our native lands in the direction of the Azerbaijan-Armenia border.

In October, Azerbaijan and Armenia officially recognized each other’s sovereignty and territorial integrity by joint statements adopted in Prague and Sochi. It once again demonstrates that the Karabakh conflict was left in the past.

The results of the Second Karabakh War create new opportunities for the region. Azerbaijan actively promotes the establishment of the Zangazur Corridor and carries out large-scale activities related to the corridor in its territory. All countries from the region will benefit from the opening of the Zangazur corridor.

We highly appreciate Baghdad Amreyev’s activity as Secretary General of the Organization of Turkic States. In recognition of his contributions to the unity of the Turkic world, Baghdad Amreyev has received a high state award of Azerbaijan, the “Dostlug” Order, which was presented to him by me personally on 21 October.

In conclusion, we once again congratulate Uzbekistan for the organization of the Summit at a high level and wish peace, prosperity and happiness to the Turkic peoples.