Putin’s war in Ukraine has done even more to boost the importance of GUAM for its members; increase the interest of others, especially Turkey; and alarm Moscow with the prospect that a group mostly devoted to democratization and economic cooperation will now take on a security dimension as well. 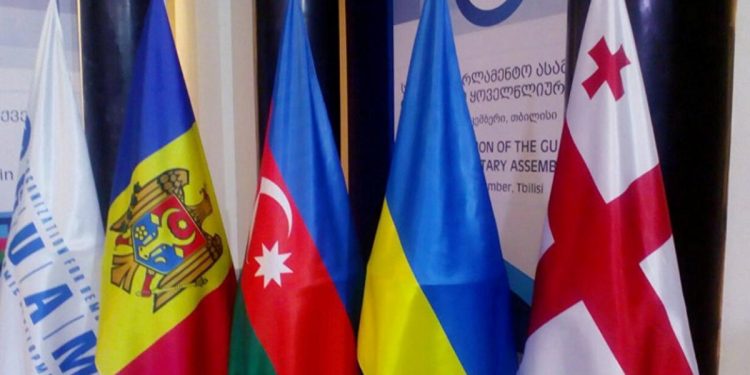 Twenty-five years ago this month, Georgia, Ukraine, Azerbaijan and Moldova formed the GUAM consultative forum to counter Russian efforts to keep them within Moscow’s orbit via the Commonwealth of Independent States (CIS) and to promote their own integration with the democratic West (Guam-organization.org, accessed October 5). Since then, the group has had a checkered history, gaining and then losing Uzbekistan as a member and failing to attract other members, including Turkey and Poland.

But over time, it has grown in importance for its members and their ties with the West. Two members, Georgia and Ukraine, have left the CIS, and the other two have downgraded their membership. All four countries have maintained the grouping despite continuing efforts from Moscow to break it up, thus serving as a platform for interaction among the four and with the West, as well as a model for other former Soviet republics considering how best to move toward more complete independence from the former imperial center (see EDM, June 20, 2007; October 9, 2018; 24tv.ua, July 22, 2020).

Moscow has always opposed the formation of such groups, including others such as the Intermarium (Hvylya.net, January 5, 2014), considering such arrangements as Western projects directed against Russia and believing that the Kremlin can deal more easily with its neighbors in a bilateral format rather than in multilateral organizations such as GUAM. But as has often been the case in Moscow’s relations with its neighbors, the actions of Russian President Vladimir Putin during his rule have been markedly counterproductive. When Putin has been restrained in his approach to Russia’s neighbors, these groupings, including GUAM, have receded in importance, but when he has moved aggressively, as in 2008 and 2014, such regional efforts have gained more traction and attracted more attention, exactly the opposite of what the Russian leader presumably wanted (Nezavisimaya gazeta, February 17, 2017).

Putin’s war in Ukraine has done even more to boost the importance of GUAM for its members; increase the interest of others, especially Turkey; and alarm Moscow with the prospect that a group mostly devoted to democratization and economic cooperation will now take on a security dimension as well. All three of these trends were highlighted at a meeting of the foreign ministers of the GUAM states on the sidelines of the United Nations General Assembly in New York at the end of September 2022. Indeed, the progress made in New York and the prospect that Ukraine will replace Moldova as chairman of GUAM next year prompted one Moscow commentator, Dmitry Nefyodov, to express concern about GUAM’s “second breath” and the ways in which economic and other cooperation among its members generally and between Azerbaijan and Ukraine specifically calls into question Baku’s commitment to cooperation with Moscow. Such an agreement was sealed in February 2022, just before Putin began his “special military operation” in Ukraine (Fondsk.ru, October 1).

At the New York meeting, all four ministers not only reiterated their opposition to Putin’s war, but Azerbaijani Foreign Minister Jeyhun Bayramov also promised to provide Ukraine with more economic and energy support. The Ukrainian officials warmly welcomed this pledge, hoping that it will lead to both future military aid and the involvement of the other GUAM countries in the reconstruction of Ukrainian regions devastated by the Russian invasion (Azertag.az, September 21; Lb.ua, September 21; Apsny.ge, October 4).

Since the beginning of Putin’s war, Azerbaijan’s SOCAR Energy Ukraine has provided more than 200,000 liters of automobile fuel for ambulances and other uses (Azertag.az, July 9). It is also being increasingly reported that Baku is providing weapons to Ukraine via Africa and that this aid may increase and even involve military planes (T.me/WingsofWar, July 30; T.me/Rybar, August 5). Not unimportantly, Nefyodov sees this Azerbaijani effort as influenced by GUAM and its role as an agent for the West against Russia (Fondsk.ru, October 1).

That Azerbaijan might be in a position to provide this and other military aid to Ukraine was highlighted by a naval exercise Baku conducted in the Caspian Sea at the same time as the GUAM meeting in New York (Azertag.az, September 19; Casp-geo.ru, September 29). This exercise shows that Azerbaijan has a naval capacity that could benefit Ukraine by providing training or other assistance in the Black Sea, support that Moscow would certainly view as both hostile and Western-organized.

Putin’s war in Ukraine has thus given GUAM a new lease on life, not only intensifying cooperation among its members but also attracting others, particularly Turkey, which, in the future, could become a member, thus crossing the important line between countries that were once part of the Soviet Union and those that never were.

If peace were to break out in Ukraine tomorrow, a highly unlikely prospect, it is possible that GUAM might recede in importance once again, as it did for a time after 2008 and 2014. Yet, even in that case, the experience of cooperation among the four in support of Ukraine makes it likely that, this time, the group will continue to play a major role both for its members and as a model for others in the future.

And if, as seems more likely, the Russian war against Ukraine continues for some time, GUAM will only grow ever more in importance and put it in a position to aid the complete and final dismantling of the post-Soviet space, as well as the integration of some, or all, of its members into the European Union and possibly even the North Atlantic Treaty Organization. If that happens, GUAM will have played a far more important in the region than that being played by the increasingly moribund CIS.