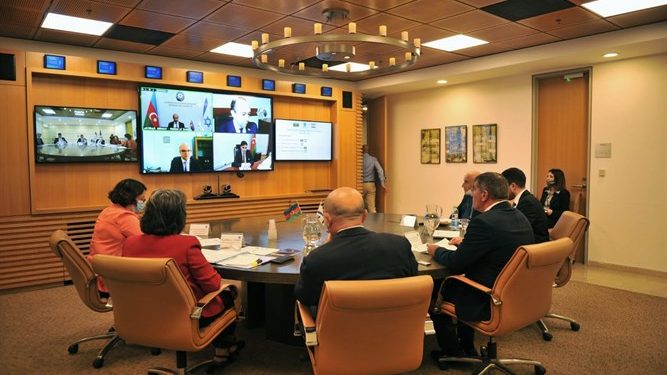 Foreign Minister Gabi Ashkenazi led the Israeli delegation to the second meeting of the Israel-Azerbaijan Joint Committee today (the first meeting took place in 2018). The meeting was held online and dealt with the promotion of bilateral relations and trade between the two countries.

The head of the Azerbaijani delegation to the meeting, Economy Minister Mikhail Jabarov, announced at the meeting that this year Azerbaijan intends to open a Tourism Promotion Office in the coming months as well as a Trade Office, with diplomatic status, in Israel.

Foreign Minister Gabi Ashkenazi: “Azerbaijan is an ally, friend, and the largest energy supplier to the State of Israel. We will continue to work to develop the important relations with Azerbaijan and expand them to new areas. Azerbaijan’s recognition of Israel’s vaccination certificate will promote trade and tourism relations between the two countries and help Israel’s economy to continue to recover from the Covid-19 crisis.”

Prior to the meeting of the joint committee, Foreign Minister Ashkenazi and Azerbaijan’s Economy Minister Jabarov discussed regional developments in the Middle East, including expanding the circle of peace countries in the framework of the Abraham Accords, and possible collaborations between the countries.

The Ministers discussed potential economic collaborations. The possibility of Azerbaijan’s recognition of Israel’s vaccination certificate was also discussed, as well as granting permission for Israeli tourists to enter Azerbaijan.

At the end of the Ministers’ discussion, an expanded meeting of the professional teams was held with the participation of the Foreign Ministry’s Director-General, Head of the Economic Division, Deputy Director-General of EuroAsian Affairs, and the Ambassador of Israel to Baku. Representatives of the Ministries of Economy, Energy, Agriculture, Water, Tourism, Health, Science, as well as the National Digital Israel Initiative and the Innovation Authority, also took part in the meeting.

In recent years, Azerbaijan has become an important tourist destination for Israelis (approximately 50,000 tourists per year before the pandemic), and the countries are currently in the advanced stages of preparation towards signing tourism and aviation agreements.