Reconciliation and peace agenda: Why does the integration of ethnic Armenians into diverse Azerbaijani society matters?

The Constitution of the Republic of Azerbaijan ensures equality for everyone, including representatives of national minorities before the law and equality of rights and freedoms of an individual irrespective of his or her race, ethnicity, religion, and language. 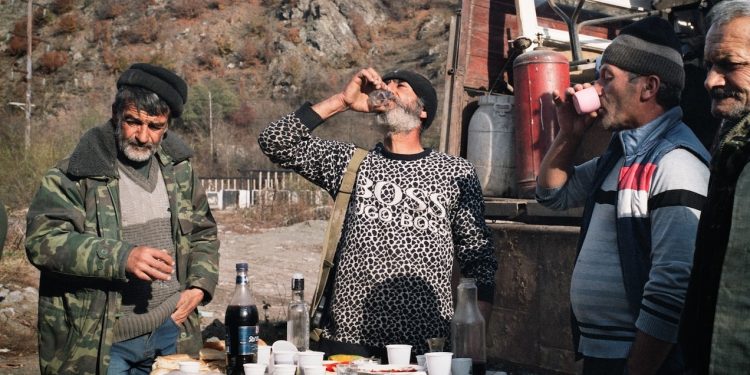 “Do not take videos at the checkpoints, as it is strictly prohibited,” warns the bus driver, as our bus convoy passes by the checkpoints of Azerbaijani armed forces and Russian peacekeepers. Here, at the intersection of two different roads – one leading to Shusha, the other to Khankendi, the invisible scars of the past war seem evident. The former was liberated by Azerbaijani forces during the Second Karabakh War of 2020, the latter is being temporarily controlled by the Russian peacekeeping mission until 2025 per the trilateral agreement signed by the leaders of Azerbaijan, Russia, and Armenia, concluding the combat operations in Karabakh region of Azerbaijan.

Though the roads have been completely renovated, the destruction in and around the city of Shusha keeps reminding us of the three tragic decades, which left the crown city of Karabakh under the occupation of Armenia-backed Karabakh separatists. Entering the city via the “Road of Victory,” one may feel like in a huge construction site, where trucks loaded with construction supplies stroll around the city and billboards about the projected urban development plans stand by the half-ruined mansions once inhabited by Shusha’s local nobility.

The arterial street of Shusha leads to the Yukhari Govhar Agha Mosque, the city’s main Islamic structure and one of the beautiful examples of medieval Azerbaijani architecture, built in the 18th century, and located only several blocks from the Armenian Cathedral of Ghazanchetsots, both being renovated by the Azerbaijani government. For many, this is a sign of future peace and trust between two communities. But what does Azerbaijan offer to the ethnic Armenians living in Karabakh?

Ethnic Armenians comprise around 1.3% of Azerbaijan’s population, which makes them the third largest ethnic minority group in the country. Over the years of illegal occupation of Azerbaijani territories by Armenia, the vast majority of ethnic Armenians remained in Karabakh, with some groups living in Baku and Sumgayit. The reconciliation process initiated by Azerbaijan, primarily by President Ilham Aliyev, aims to restore mutual trust between communities and integrate ethnic Armenians into Azerbaijani society. The integration strategy has seen great support from the international community and prominent western political analysts and diplomats.

In an interview with Baku-based Trend News Agency, Irina Tsukerman, a New York-based human rights and national security expert said that ethnic Armenians in Karabakh need to contribute in equal measure to the development of Azerbaijan. “The only real way to protect their rights is for them to have Azerbaijani citizenship and the same rights under the law. And the only way for them to integrate and benefit from what Azerbaijan has to offer is to act like other citizens and view the national idea of a state as an idea greater than purely ethnic lines and accept the responsibility that helps contribute to a stronger and better society,” the expert added.

The Constitution of the Republic of Azerbaijan ensures equality for everyone, including representatives of national minorities before the law and equality of rights and freedoms of an individual irrespective of his or her race, ethnicity, religion, and language. A solid example of the state-level protection of national minorities can be the consideration of the rights of ethnic minority groups at institutional, as well as NGO levels. A special commission for the provisional release of convicts and the commutation of the unserved part of the sentence to a milder form of punishment has been operating under the Ministry of Justice since 2013. NGOs, where representatives of national minorities are represented together with other organizations, are involved in its activities.

At a local level, ethnic minority groups, such as Lezgis, Talysh people, Georgians, Mountain Jews, as well as Russians and Tats enjoy the freedom of cultural preservation, enabling them to preserve and revive their culture, traditions, and customs in community centers, religious organizations, and even in their theatres. In point of fact, Russian and Lezgi theatres based in Baku and Qusar, respectively, have been the cultural centers of both communities for decades. Red Village or Qırmızı Qəsəbə is among many examples of unique coexistence in Azerbaijan, where Jews and Muslims not only live side by side but also share joy and sorrow altogether. As a music-loving society, for many Azerbaijanis regardless of their ethnicity, the Talysh folk group “Nənələr” (“Grandmothers”) is a favorite choice when it comes to public concerts that are regularly attended by thousands.

Taking into account the aforementioned facts, it should be noted that the reconciliation and peace agenda envisages the preservation of the cultural and religious rights of ethnic Armenians, ensuring a smooth integration into Azerbaijani society, where they will be able to enjoy constitutional rights like all other citizens of Azerbaijan. Development of culture and free practice of religion are among some fundamental rights promised by the Azerbaijani government and backed by the Constitution.

Sadly, the public opinion among ethnic Armenians living in Khankendi and its neighboring districts have been influenced by ideologists whose main goal has been the destabilization of the region, followed by the spread of ethnic hatred among the two communities. The destructive intentions against the possible peace agenda can still be seen in the messages of some foreign politicians, who irresponsibly support the holdouts of separatists in Karabakh, as well as Armenian officials, who intentionally paint a picture of “impossible coexistence” of the two communities.

As both Azerbaijan and Armenia approach the second anniversary of the trilateral agreement concluding the Second Karabakh War, hopes for peace remain high despite the recent provocations along the Armenia-Azerbaijan state border and baseless arguments offered by Armenian officials. For some, the 10-kilometer distance between Shusha and Khankendi soon will no longer be a road of separation and hatred, as both Azerbaijani cities will enjoy free movement and coexistence the way they used to do some 35 years ago.