Armenia, a small, landlocked country of slightly more than 2 million people, which has not had a gamechanger impact on the regional agenda, namely in the South Caucasus, comes under the spotlight when a topic concerning the adversaries of this country, namely Azerbaijan, pops up on social media. 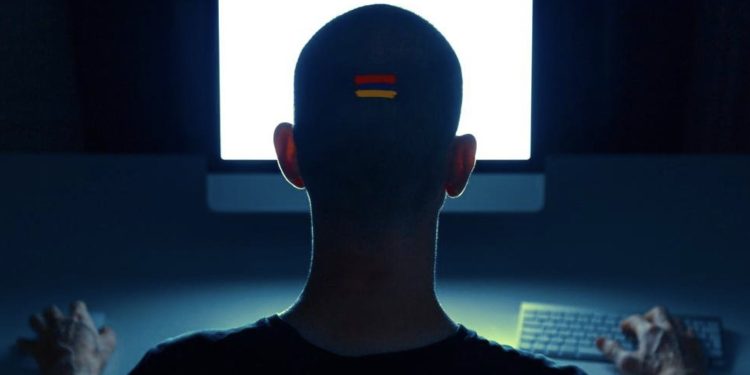 The reason is simple – people from around the world came under the same roof to support this South Caucasus nation.

From the USA to France, Belgium, Germany, Poland, Iran, and India, ardent fans of Armenia come to resort to almost all kinds of misinformation, unverified data, and emotion-packed accusations, toward the enemies of Yerevan, on top of which comes Azerbaijan. Armenian authorities cannot be said to be able to hire supporters from various continents of the world given its extremely limited financial abilities, however, the hand of the Armenian Diaspora can be visible under the stone. Traditionally, lobbying and personal invitations are the most widely seen methods of Armenia and its foreign Diaspora to create a chorus of foreigners. Most of the foreign passengers on the Armenian ship have been hosted personally by Armenians or “ticked” by the Armenian Diaspora before they took the stage to promote a specific topic. 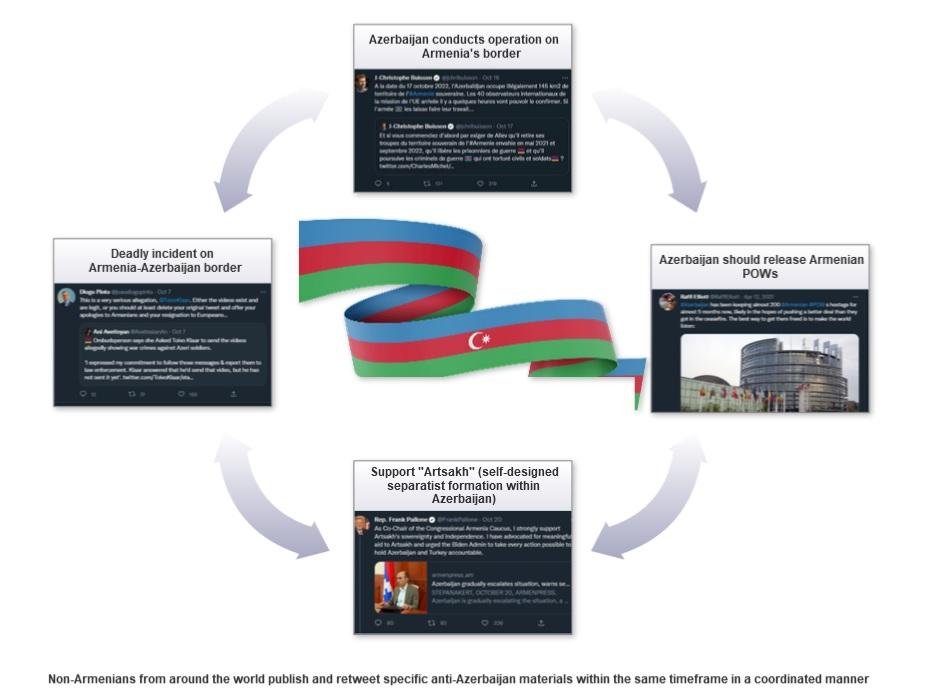 Let’s see the non-Armenian participants of the Armenian propaganda.

Jean-Christophe Buisson – the deputy director of French Le Figaro magazine Jean-Christophe Buisson has already been hosted by Armenian authorities and hangs the “Medal of Gratitude” of Armenia on his chest for his so-called zeal in Armenia’s anti-Azerbaijan campaign. Buisson is one of the active Twitter users, the newsfeed of who is inundated with posts promoting hatred towards Armenia’s eastern neighbour. From the border escalations in September to drawing parallels between the humanitarian crisis in Ukraine and Armenia, as well as seeking rights for separatists in Karabakh, the Frenchman has not been missing “key points” of Yerevan’s defamation of Azerbaijan. 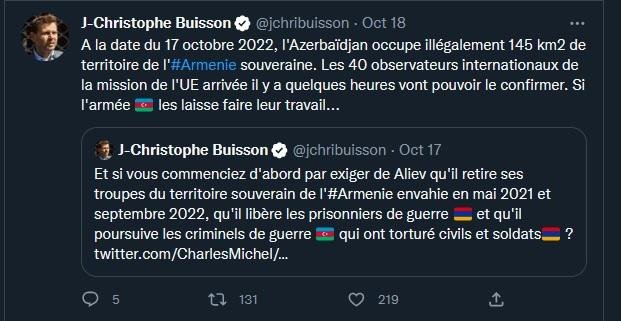 Buisson also demanded freedom for Armenians, which Azerbaijani forces caught red-handed preparing a terrorist attack in Karabakh post-2020 war. He has been carrying the same tune with the Armenian government and Diaspora by calling them “prisoners of war”, who, in fact, are terrorists and were not captured during the 2020 Armenia-Azerbaijan war but after it.

Diogo Pinto – the next ardent supporter of Armenia and “retweeter” in Brussels cannot go unnoticed if the talk is about anti-Azerbaijan propaganda based on unverified data. Pinto once headed the “European Friends of Armenia”, which openly promotes partnerships with the Armenian Diaspora and Armenian communities. The word partnership here should be interpreted another way given that the Armenian Diaspora is known as one of the world’s most generous lobbyist sponsors. In his farewell notes after resigning as the organization’s chairman in 2018, Pinto publicly stated that his friends in Armenia and “Artsakh” (Karabakh region of Azerbaijan claimed by Armenian separatists) “can count on him among their fans and supporters”. 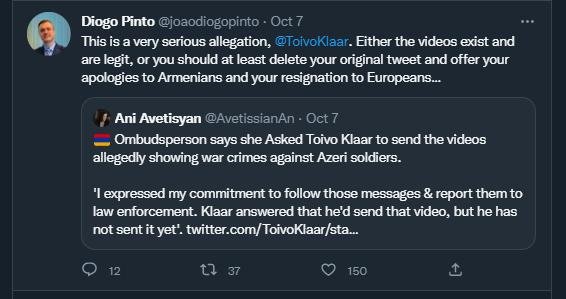 Losing his job at the “European Friends of Armenia” office did not prevent him to deliver on his promise before the Armenians. Pinto hit the same point as other pro-Armenian foreigners by joining Armenian alleged accusations against Azerbaijan, including the video showing the alleged execution of Armenian soldiers, as well as the rhetoric of the French authorities against this country. And his participation in the propaganda campaign takes place simultaneously in coordination with dozens of others who speak the same language.

Tomasz Lech Buczek – this politician from Poland should arguably be perceived as the most adamant overseas supporter of Armenian propaganda. He zealously tries to be more Armenian than the Armenians themselves with his actions, for instance, offering “himself as an exchange for an Armenian serviceman captured by the Azerbaijani military”.

Buczek’s political life is seen to clearly focus on an anti-Azerbaijan misinformation campaign. His journey began in 2018 when he travelled to Armenia and “accidentally” learned about the fate of two Armenian occupants that went to war with Azerbaijan and did not return. This story left so big an influence on him that Buczek instantly decided to write an anti-Azerbaijan book, which was based on “confirmed sources”. However, the neutral readers of the book were confirmed to have difficulties in finding unbiased and impartial sources in it. 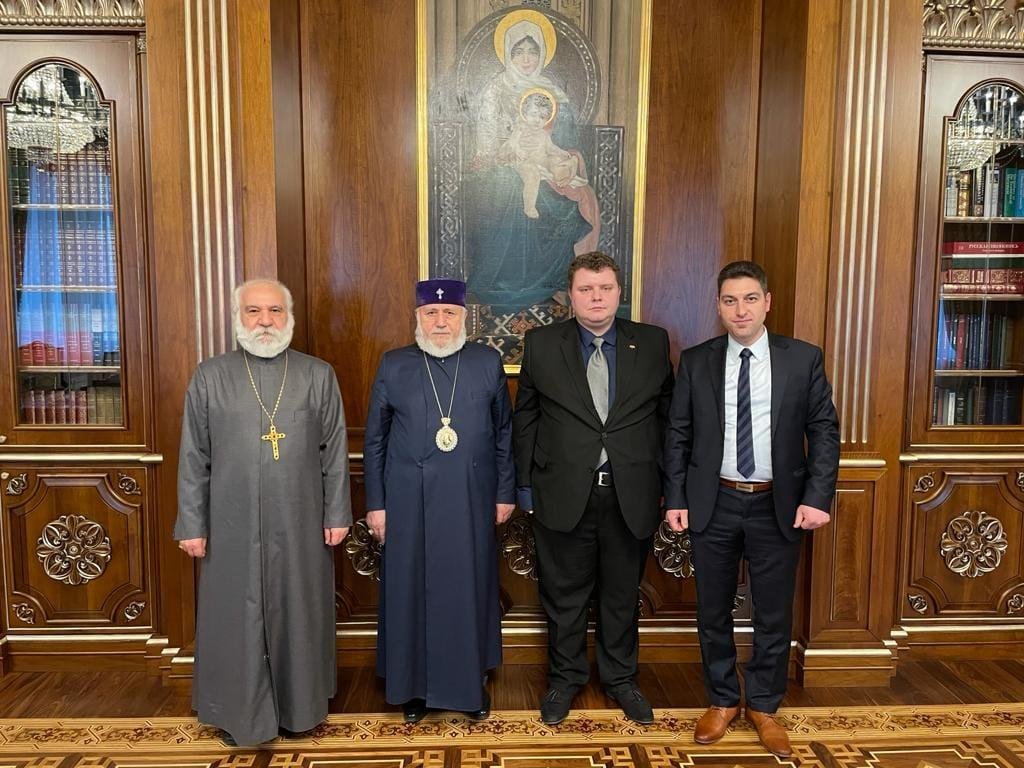 The Twitter activity of the Polish man targets almost everyone and everything affiliated with Azerbaijan – from authorities to politics, economy, history, culture and more. He, like the others under the same roof with him, blames Azerbaijan for so-called “war crimes” and creating an “anti-Armenia coalition”, as well as calls for independence for the separatists in the Karabakh region and “revenge” on Azerbaijan due to the 2020 war. Buczek almost does not miss any trending anti-Azerbaijan hashtag on Twitter with his non-stop publications and retweets aimed at pushing the hashtag even more on top trends. The timing of his personal campaign fits in the period of mass Armenian propaganda.

Members of US Congress – the strong influence of the Armenian Diaspora in the US Congress is nothing new. Over the years, the Armenian Assembly of America – one of the most powerful Armenian lobby institutes in the US, have poured millions of dollars to lure the congressmen.

OpenSecret, a tax-exempt investigative project which follows money in politics, published a chart on annual lobbying of the Armenian Assembly of America in the US since 1998. The calculations by OpenSecrets based on data from the Senate Office of Public Records indicate that in 2021, the Armenian lobby paid $110,000 to meddle in the Foreign and Defence Policy of Congress. 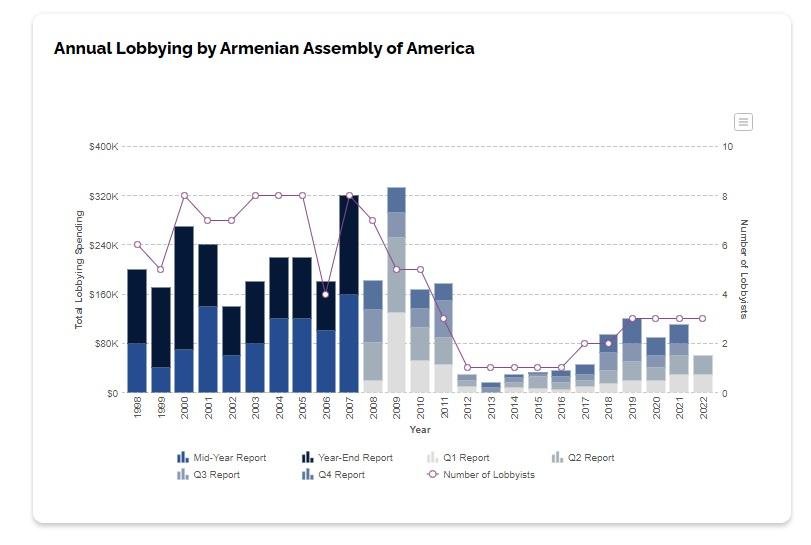 The bills lobbied by the Armenian Assembly of America included

“Calling on Azerbaijan to immediately release all prisoners of war and captured civilians” and “National Defense Authorization Act for Fiscal Year 2022”. In both documents, they urged the congressmen to condemn and isolate Azerbaijan for its alleged crimes. The lobbyists representing the interests of the organization were Bryan Ardouny, Miriam Khaloyan, and Mihran Toumajan.

On October 4, the Foreign Relations Committee of the US Congress issued a statement to call for the condemnation of the alleged murder of the Armenian soldiers by Azerbaijani troops. The committee’s chairman, Senator Bob Menendez, a pro-Armenian legislator with a rich background of smooth relations with the Armenian Diaspora, immediately jumped in to support the committee’s call. He showed no restraint in condemning Azerbaijan for the alleged crimes in the border escalations with Armenia in mid-September. Menendez was one of the high-ranking followers of the Armenian propaganda that the Azerbaijani army invaded the territory of Armenia and killed those who resisted it. That was not a bolt from the blue given his constant promotion by the Armenian National Committee of America (ANCA), the strongest Armenian lobby organization in the US.

ANCA released an annual report card for Menendez compiling his pro-Armenian, as well as anti-Azerbaijan legislative metrics at the Congress in 2021-2022. Armenian diaspora’s favourite congressman co-sponsored a resolution and issued a statement condemning Azerbaijan’s alleged attack on Armenia in September 2022, co-sponsored pro-Armenian Amendments to the 2023 fiscal year, signed separate letters urging an end to US military aid to Azerbaijan, recognition of the so-called “Armenian genocide”, and issued a statement to mark the anniversary of the fictional “Armenian genocide”.

In the meantime, Menendez has a proven track record of taking bribes in exchange for official favours of the sponsors. In a court trial in 2017, he was accused of bribery and corruption. His anti-Azerbaijan agenda contains also blocking the sales of military hardware by the US government to Azerbaijan and hindering Matthew Bryza’s appointment as an ambassador to this country. Menendez is one of the key figures promoted constantly by ANCA on its official web and social media platforms.

PS: The same report cards of ANCA can be found also about congressmen Frank Pallone, Bred Sherman, Adam Schiff and more than a hundred others who are known for their all-out support for Armenia’s anti-Azerbaijan and anti-Türkiye agenda. Some of these men, including Menendez, Sherman, Pallone, and Schiff are given “A+” grade on ANCA cards, which means their closest affiliation with the Armenian diaspora locomotive.

Sascha Duerkop – until 2020, German national Duerkop worked as the self-proclaimed “secretary-general” of the so-called Confederation of Independent Football Associations (CONIFA), an international football organization not affiliated with the world’s governing football organization FIFA. Duerkop and his CONIFA have been actively engaged in stirring regional conflicts, including the once-existent Armenia-Azerbaijan Karabakh conflict. In 2019, CONIFA arranged an illegal football tournament in the Azerbaijani territories once occupied by Armenia involving the teams representing breakaway, separatist, and autonomous regions, including Lapland (Finland), Abkhazia (Georgia), South Ossetia (Georgia) Chameria (Albania), Székely Land (Romania), Padania (Italy), Sapmi (northern parts of Sweden, Norway, Finland, and Russia) and of course, the separatist in the Karabakh region of Azerbaijan. Georgia and Azerbaijan, condemned the tournament, noting that CONIFA was an unrecognized organization that arranges such events in unrecognized territories.

Among the major supporters of CONIFA, there were self-designed leadership of Armenian separatists in Karabakh, including then “president” Bako Sahakyan.

Duerkop has then said the Azerbaijani government contacted him through its embassy in Berlin and informed him of the realities of Karabakh in a very polite manner. 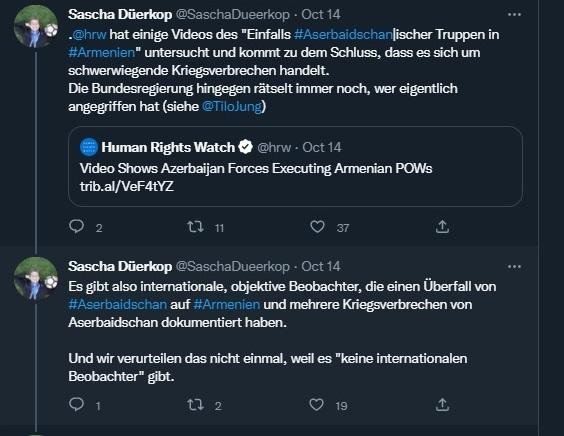 Since then, he has been demonstrating an even more aggressive approach toward Azerbaijan, and currently promoting Armenian propaganda in social networks and putting pressure on German politicians who have contacts with Azerbaijan. He cooperates intensively with the Armenian diaspora. Recently, he joined the condemnation of the abstention of the German parliamentarians to support the anti-Azerbaijan resolution of the Council of Europe, which allegedly accused Azerbaijan of encroaching into Armenia’s territory. He also actively promoted the video allegedly showing the execution of the Armenian soldiers by the Azerbaijani servicemen. The date of his Twitter activity on this topic coincided with the start of mass Armenian propaganda.

Rananjay Anand – this entrepreneur from India introduces himself as the President of the Indo-Armenian Friendship NGO, which was established in Armenia. The mission of the organization, as seen on its bio, is based on “promoting people-to-people connection, strengthening cultural, and socio-economic ties between the two nations. However, President Anand focuses more on politics and the anti-Azerbaijan campaign than the key issues on the agenda of his NGO.

He has welcomed the visit of the Armenian defence minister to India and the agreement on supplying Indian military hardware to the South Caucasus country, as well as the calls of the Armenians for the so-called recognition of the separatist formations in the territory of Azerbaijan.

Anand’s anti-Azerbaijan Tweet was quoted by Indian media outlets where he copied the Armenian propaganda calls about the unverified footage of a war incident. The Indian was also seen urging Formula One organisers to deprive, what he called “genocidal” Azerbaijan, of the host status, by signing and promoting a relevant petition launched on Change.Org. #StandWithArmenia, #AzeriWarCrimes, and #StopAzerbaijaniAgression are among his favourite hashtags on social media.

Giorgi Gogia – a Georgian-origin human rights expert at Humans Rights Watch is seen to be focused more on one-sided reports on the confrontation between Armenia and Azerbaijan. He was quick in disseminating the Armenian propaganda on the video of the war incident in early October, urging criminal responsibility for perpetrators, who he believed were Azerbaijanis.

Paul Antonopoulos – a Greek doctorate researcher is also dedicating his research to libel both Azerbaijan and Türkiye. When anti-Azerbaijan sentiments began rising on the internet, for instance, the alleged video of a war incident, Paul immediately joins the Armenian propaganda campaign to put his stake by calling for condemnation, responsibility, punishment and so on. He even defies the Greek government for its relationship with Azerbaijan. For him, establishing or improving relations with Azerbaijan is unacceptable, because “it invaded Armenia”.