Time for a U.S.-Azerbaijan Summit

The late American statesmen Zbigniew Brzezinski once described Azerbaijan as “the cork in the bottle containing the riches of the Caspian Sea Basin and Central Asia.” 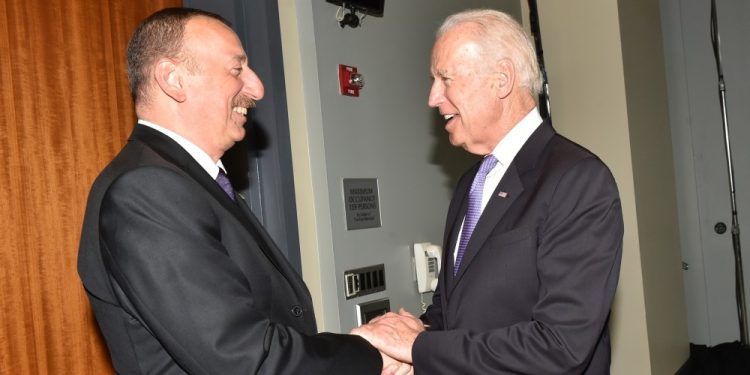 As Russian President Vladimir Putin continues to weaponize natural gas exports to Europe, President Biden must reengage with the one country that holds the key to unlocking what Brzezinski described as the riches of the Caspian Sea Basin and Central Asia, namely, the secular Muslim nation of Azerbaijan. As the first step to laying the foundation of 21st-century global energy security, President Biden must immediately invite the wise leader of Azerbaijan, Ilham Aliyev, to the White House.

There is indeed a precedent for such engagement between the United States and Azerbaijan. When President Clinton met with Heydar Aliyev, the former President of Azerbaijan at the White House in 1997, he provided America’s full diplomatic, economic and political support to Azerbaijan to build the Baku-Tbilisi-Ceyhan pipeline that today carries close to one million barrels per day of Azerbaijan crude oil to refineries in Europe. This historic meeting cemented the shared U.S.-Azerbaijan goal of uninterrupted exploration, development and transportation of oil and gas from the Caspian Sea basin to markets in Europe and beyond. In terms of size, these resources amount to the world’s tenth and fourth in oil and natural gas respectively.

One of the main reasons why President Biden should invite President Aliyev to the White House for a working visit is to demonstrate American resolve to help build a trans-Caspian pipeline from Turkmenistan to Europe via Azerbaijan.  Turkmenistan holds the world’s fourth largest reserves of natural gas.  Creating this massive energy corridor from Central Asia to Europe via Azerbaijan will ensure the long-term stability of global energy markets and diverse natural gas supplies into Europe. The 140 billion cubic meters of annual gas imports from Russia to Europe can slowly but steadily be replaced with a trans-Caspian pipeline that is anchored by Azerbaijan.

In addition to preventing Mr. Putin from “holding Europe by the pipeline,” there are other national security issues why this U.S-Azerbaijan summit must happen.  A Biden–Aliyev meeting will send a very powerful message to the Presidents of Turkmenistan, Kazakhstan and Uzbekistan, all of whom are energy-rich and yet worry about falling prey to Mr. Putin’s aggression, that the United States is not only serious about building a trans-Caspian pipeline but will provide its full financial, diplomatic and political support. In fact, during their meeting, President Aliyev, who has intimate knowledge of what worries the leaders of Turkmenistan, Uzbekistan and Kazakhstan about Russia, can explain to President Biden what the leaders in Central Asia might expect from Washington to make a trans-Caspian pipeline a reality. President Biden and his national security team would benefit enormously from this exchange.

By inviting President Aliyev to the White House, Mr. Biden will also send a very powerful message to America’s European allies that Washington is serious about building a trans-Caspian pipeline to help ensure the energy security of our major trading partners. The underlying message is clear: America’s ally Azerbaijan will be the reliable long-term corridor through which the natural gas Europe so desperately needs will be provided.

Yet another major reason why this Biden-Aliyev summit must take place is the commitment of Washington to the peaceful resolution of the conflict between Azerbaijan and Armenia over the territory of Nagorno-Karabagh.  Now that Azerbaijan has liberated its territories from Armenian control, President Aliyev has made it very clear that a lasting and permanent peace agreement must take place between the two nations. This process can start during the U.S.-Azerbaijan summit whereby a “peace-pipeline” between Azerbaijan and energy-poor Armenia can be announced.  This “peace-pipeline” will allow Armenia to decouple from Russia and no longer be dependent on Moscow for its energy needs.

One final but very important reason to invite Ilham Aliyev to the White House is to highlight the role Azerbaijan can play as a model in the Muslim world for religious tolerance. The fatwa to murder Salman Rushdie is a stark reminder that Islamic extremism remains a global threat. During their summit, President Biden can highlight Azerbaijan as the model of a Muslim nation whose multi-cultural fabric is anathema to the hate being exported by Muslim extremists such as the mullahs in Iran. The human right to practice one’s faith is a core value shared by both Americans and Azerbaijanis.  Indeed, today, Azerbaijan is home to thriving Jewish, Christian, Bahai and Sunni Muslim communities, all of whom live side by side in a spirit of tolerance. President Biden can highlight Azerbaijan as a model for other Muslim nations to emulate.

The United States has a historic opportunity to create a tectonic shift in global energy markets which will stabilize world economies for many years to come. One small but important American ally holds the key and President Biden must not hesitate and invite Ilham Aliyev to Washington to begin the next chapter in global energy security.