As previously reported, another international conference with the participation of foreign diplomats accredited in Azerbaijan was held in Shusha last week at the behest of President Ilham Aliyev. 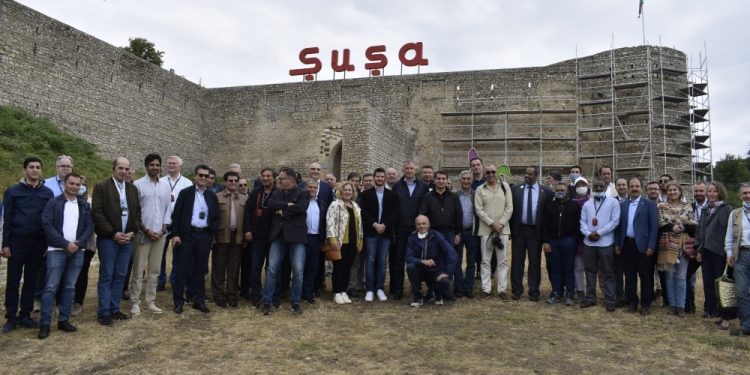 The conference focused on the rehabilitation of the liberated territories, mine clearance and urban development capacity, as well as opportunities for international cooperation.

The US and the French ambassadors were also on the guest list, but once again the plenipotentiary representatives of those states chose to ignore the invitation to visit Shusha, even though the conference was not political but purely humanitarian.

According to Hikmet Hajiyev, Assistant to the President, official Baku saw this refusal as the lack of respect for the territorial integrity and sovereignty of Azerbaijan on the part of the United States and France.

In response to this criticism, the US Embassy of Azerbaijan released a written statement, stressing that American diplomats had visited the liberated Azerbaijani territories on several occasions. Nevertheless, no response was given as to why the American ambassador declined an invitation to visit Shusha to participate in a humanitarian conference.

What is the reason? Why do the official representatives of Washington and Paris refuse to go to Shusha with persistence worthy of a better cause?

According to credible information from diplomatic sources, US and French representatives have repeatedly stated at closed meetings that they do not go to Shusha as a matter of principle.

Apparently, both the United States and France had their own vision of the settlement of the Karabakh conflict, and Azerbaijan returning Shusha and restoring control over the occupied territories clearly did not fit into that vision.

But, as we know, the victorious 44-day war foiled these plans, and Azerbaijan regained control not only over the seven occupied districts around the former Nagorno-Karabakh Autonomous Oblast, but also part of the administrative territory of the former NKAO, including Shusha.

Thus, the plans of Washington and Paris to resolve the conflict by creating a second Armenian state at the expense of the occupied Azerbaijani territories were ruined.

In this situation, it would seem logical to assume that all interested players would accept the fait accompli with dignity and adapt their policies to the post-conflict period in order to turn the last page of the armed confrontation between the two South Caucasus states and contribute to the establishment of a lasting peace between Azerbaijan and Armenia.

But it appears that neither Washington nor Paris believe that the conflict is over. In their opinion, the issue of the former Nagorno-Karabakh, the main cause of the thirty-year armed confrontation between the two neighboring states, continues to be an object of debate. That is why, even though Washington and Moscow are effectively at war over the situation in Ukraine, the United States and France are in no hurry to bury the Minsk Group format. This is also evidenced by the appointment of US Assistant Secretary of State for European and Eurasian Affairs and career diplomat Philip Reeker as Co-Chair of the OSCE Minsk Group and Senior Advisor for Caucasus Negotiations.

To be fair, the United States has repeatedly called on Azerbaijan and Armenia to negotiate directly to achieve permanent peace and resolve border disputes. In official statements, Washington has consistently expressed support for the EU-brokered Armenia-Azerbaijan talks. However, the persistent attempts by the US and France to revive the Minsk Group format raise doubts as to the sincerity of these statements. It is increasingly clear today that the format of the talks between Azerbaijan and Armenia, mediated in parallel by Moscow and Brussels, does not suit Washington and Paris, because it prevents the two countries from strengthening their presence in the South Caucasus and, consequently, from gaining leverage over Azerbaijan.

The US and French ambassadors’ demonstrative refusal to attend the international event in Shusha virtually makes the position of the countries refusing to accept the new regional realities an official one. And Azerbaijan, in turn, openly communicates this to those who once urged it to come to terms with the fact of occupation.

The involvement of such an impressive number of diplomats shows that the world, unlike the United States and France, has already accepted the new reality.

As for the demarche of the plenipotentiary representatives of the two countries co-chairing the de facto defunct OSCE Minsk Group, it causes sincere bewilderment in professional diplomatic circles. With all that is happening in and around Ukraine, do the United States and France seriously expect to come to any agreement with Russia on the division of the spheres of influence in the South Caucasus as they try to steer the Armenian-Azerbaijani dialogue back into the framework of the Minsk Group?

In short, these diplomatic twists and turns, designed to secure the West’s geopolitical interests, are obvious and clear. What is not clear is why to Baku’s criticism of the US and French ambassadors, members of our opposition respond by criticizing… the Azerbaijani government.

Instead of showing solidarity with the nationwide issue and demanding an explanation from the US Embassy for refusing to visit Shusha, Jamil Hasanli, Tofik Yagublu, Bakhtiyar Hajiyev, Natik Jafarli, Ilkin Rustamzade, Seymur Hazi, Anar Mammadli, Fuad Gahramanli, Azer Gasimli and other members of the opposition flooded social media with accusations against the government of Azerbaijan, which apparently had failed to take into account that both ambassadors were out of the country at the time.

But even if this is the case, what stopped the US and French diplomatic missions from sending any other officials to Shusha? Or did the entire staff of the two embassies leave Azerbaijan for the duration of the conference in Shusha?

The fact that the opposition members speak from pro-American and pro-French positions instead of defending the national interests of Azerbaijan cannot be interpreted otherwise than as crossing the red line. It makes one wonder who they would support if the United States demanded tomorrow that the control over Shusha be handed back over to the Armenians.