Will Armenia turn toward the United States?

While there is little reason to believe that Armenia will soon turn away from Moscow and toward Washington, Pelosi’s trip could be a starting point for another political shift in the Caucasus. 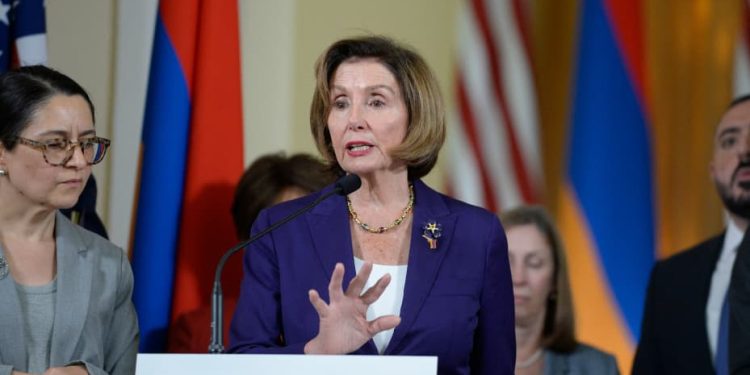 House Speaker Nancy Pelosi led a congressional delegation to Armenia last Saturday, September 17, making her the highest-ranking American official who has traveled to Armenia since the country’s independence from the Soviet Union in September 1991.

Pelosi’s decision to travel to Armenia just days before its Independence Day is sure to signal U.S. support for the country, which only recently engaged Azerbaijan in another round of bloody battles that left a trail of casualties.

Before Pelosi’s visit, analysts were split over whether the Congressional trip amounted to U.S. support for Yerevan against Baku, or whether it was intended to consolidate Armenia’s ceasefire with Azerbaijan. Either way, Pelosi’s unexpected travel to Yerevan has sent been broadly interpreted by states across the region, including Azerbaijan, Turkey, Russia, and Iran.

Once she arrived on the ground in Armenia, Pelosi was decisive in rebuking Azerbaijan. After meeting with Alen Simonyan, speaker of the Armenian National Assembly, she held a press conference and severely criticized Baku.

“Armenia is of particular importance to us because — the focus on security following the illegal and deadly attacks from Azerbaijan on Armenian territory. We strongly condemn the attacks, we and our delegation, on behalf of the Congress, which threatens prospects for much-needed peace,” Pelosi said.

“We — our delegation had been very outspoken, saying that this [conflict] was initiated by Azeris and there has to be recognition of that,” Pelosi added before noting that “we have tried to hold Turkey responsible as well as Azerbaijan for that conflict.”

Pelosi’s unequivocal and frank statements forced Baku to respond. Azerbaijan’s Ministry of Foreign Affairs called Pelosi’s statement “deeply regrettable” and “unfair,” and it is “a serious blow to efforts to normalize relations between Armenia and Azerbaijan.”

Yet it would appear that the United States Congress is not finished on the matter. Pelosi stated that a resolution condemning Azerbaijan’s invasion of Armenia would be taken up soon in Congress, and that several of the “strongest champions of Armenia to ever serve in the Congress” were ready to hold Azerbaijan accountable.

Clearly, the visit had been planned by influential American-Armenian politicians to develop bilateral diplomacy. Reps. Anna Eshoo (D-CA-18) and Jackie Speier (D-CA-14), two Armenian Americans, and Frank Pallone (D-NJ-6), co-chair of the Congressional Caucus on Armenian Issues, were the members of the Congressional delegation to visit Armenia. Also, Pelosi, the head of the delegation, is the representative of California’s twelfth district, home to a significant number of Armenian-Americans.

“As Californians, all three of us recognize that 40 percent of Armenian-Americans are in California. So we feel this is a family visit for us because we are surrounded by not only their heritage but their great faith and patriotism in America,” added Pelosi during the press conference.

The United States’ large Armenian-American population has been known to wield significant political influence in the U.S. Congress, even though this has not always led to pro-Armenian outcomes. For example, former President Donald Trump was notably silent about the Nagorno-Karabakh conflict, declined to use the term genocide to describe the events of 1915, and increased U.S. aid to Azerbaijan to $100 million per year.

Yet Congress has gone in the opposite direction. In 2019, the House of Representatives passed a resolution recognizing the Armenian Genocide as committed by Ottoman Turkey. “It is a great day for Congress,” Pelosi said at the time.

Afterward, Joe Biden promised the Armenian-American community during his 2020 presidential campaign that he would hold Turkey responsible for its role in the genocide. As president, Biden later made history in 2021 by officially recognizing it as such. “The American people honor all those Armenians who perished in the genocide that began 106 years ago today. We honor their story. We see that pain. We affirm the history. We do this not to cast blame but to ensure that what happened is never repeated,” Biden declared in a statement.

Nevertheless, Congress has sought to increase U.S. support for Armenia. Members of both parties in the Senate and House have demanded the Biden administration end its disproportionate aid to Azerbaijan and hold Baku accountable under Section 907 of the Freedom Support Act.

Secretary of State Antony Blinken has certified that such assistance to Azerbaijan would not “undermine or hamper ongoing efforts to negotiate a peaceful settlement between Armenia and Azerbaijan or be used for offensive purposes against Armenia.” But Congress has found this argument to be unsatisfying.

In February 2021, more than 100 members of Congress signed a bipartisan statement urging the Biden administration to strengthen U.S.-Armenian ties, denounce Azerbaijani aggression, and increase U.S. aid to Armenia. “We urge you to identify ways we can provide additional economic assistance to Armenia to support its democracy and development as well as respond to the significant number of displaced people who have fled the conflict in Artsakh. We also request that your administration identify ways in which our economic, cultural, and other ties to Armenia can be improved to benefit Armenia and the large Armenian American diaspora in the United States,” they wrote.

Although it is unclear where U.S.-Armenian relations are headed, an improvement in ties could have repercussions across Central Asia and the Caucasus. Armenia’s neighbor Iran, for example, has been closely monitoring the conflict just over its northern border, and Russia, an Armenian ally, also remains intimately involved in the peace negotiations. Russia, which has several military bases in Armenia, signed a security treaty with Yerevan in 1977. According to the agreement, an attack on Armenia would be considered an attack on Russia, and vice versa.

However, it is notable that the speaker of Armenia’s parliament recently said he was unhappy with the response of the Russian-led Collective Security Treaty Organization to Yerevan’s request for help in its conflict with Azerbaijan. The speaker, Alen Simonyan, also told national television that Armenia expected more tangible steps from Russia, not just statements.

Thus, while Yerevan’s plea for Russian assistance went practically unanswered, Pelosi’s visit could help stable Armenia’s regional position. If this trajectory continues, Armenia could move away from Russia over time, leading to additional rapprochement between Washington and Yerevan.

Over the past year, the U.S. Embassy in Armenia has worked to improve bilateral relations. For example, in June 2022, the U.S. assistant secretary of State for European and Eurasian Affairs, Karen Donfried, traveled to Armenia and discussed opportunities to develop Armenia’s democratic institutions and expand cooperation with high-ranking Armenian officials. Additionally, in May 2022, the United States and Armenia signed a Memorandum of Understanding Concerning Civil Nuclear Cooperation (MOU) to further improve their strategic cooperation.

Despite some disagreements between the U.S. Congress and the Biden administration, it remains to be seen whether the U.S. Department of State will entirely support Pelosi and the Congressional delegation’s stance on the Armenian-Azerbaijani conflict. Furthermore, while there is little reason to believe that Armenia will soon turn away from Moscow and toward Washington, Pelosi’s trip could be a starting point for another political shift in the Caucasus.

Mohammad Javad Mousavizadeh is a journalist and analyst in international affairs and foreign policy. He has written many articles for digital publications worldwide.