Considering this reginal economic potential, the Zangilan International Airport will play a key role in realizing these opportunities. On October 20, the inauguration of the Zangilan International Airport took place in the East Zangezur district of Azerbaijan (Azertag, October 20). The airport was jointly inaugurated by Azerbaijani President Ilham Aliyev and his Turkish counterpart, President Recep Tayyip Erdogan, who became the first foreign head of state to land at Zangilan airport (Hurriyet Daily News, October 20). This is the second airport built by Azerbaijan in the territories that were liberated from Armenian occupation during the 44-Day War. The groundwork for the new airport was laid in April 2021, and it took a year and a half to construct the airport in accordance with the highest international standards. The first technical flight to the airport was carried out on September 9 (Azal, September 10).

The Zangilan airport’s runway is about 3,000 meters in length and 60 meters in width. It is designed to accommodate all types of aircraft, including wide-body, heavy cargo aircraft. The airport’s terminals will be able to serve 200 passengers per hour, and flights will operate in line with International Civil Aviation Organization and International Air Transport Association standards (Daily Sabah, October 20). The airport can accept up to eight aircraft at once. Turkish companies also took part in the construction of the airport, which is equipped with automated systems and has a control tower in compliance with international civil aviation standards.

After the liberation of Karabakh, the first airport there was built in the Fuzuli district and became operational in October 2021. It took only eight months to construct this airport, and because of its strategic location, it was dubbed “The Air Gate” of Karabakh (Trend.az, August 29, 2021). The third airport in the liberated Azerbaijani territories is scheduled to become operational in the Lachin district in 2024 (Caspian News, July 25). It will become the highest-altitude airport in Azerbaijan, located nearly 2,000 meters above sea level.

Because of its geographical location, the new airport in Zangilan will bring substantial benefits for Karabakh’s economic development. Using this airport, it is possible to reach the East Zangezur economic region in less than 45 minutes from Baku, which makes this region more accessible for both foreign investors and tourists (Sherg.az, September 10). Considering the growing interest in building up tourism and attracting investment in the Karabakh region, Zangilan airport will play a crucial role in this regard.

The East Zangezur region has great potential for the development of different economic spheres. Before the Armenian occupation, this region accounted for a significant share of the Azerbaijani economy. Heavy industry; agriculture, especially animal husbandry; tourism; and healthcare were the most developed economic spheres in the East Zangezur region. Because of occupation-related destructions, this region’s share of the Azerbaijani economy fell to a mere 0.1 percent (Report.az, July 2, 2021).

However, as soon as the 44-Day War ended, Azerbaijan began a massive restoration program that aims to restore Karabakh’s economic potential in a relatively short amount of time. Based on initial calculations, the production of agricultural and industrial products worth 3 billion manats ($1.76 billion) will be possible in the East Zangezur region. Thus, with this potential, the East Zangezur region could account for about 4 percent of the Azerbaijani economy in the coming years (Azerforum, November 11, 2021).

Considering this reginal economic potential, the Zangilan International Airport will play a key role in realizing these opportunities. Along with the various production systems, it is essential to have the necessary infrastructure to ensure the stable export of these products; thus, the Zangilan airport will play a critical role in expanding the export of those products produced in the East Zangezur region to foreign markets. By doing so, the Zangilan airport will also make a significant contribution to the diversification of Karabakh’s economy in the regional and international markets.

Furthermore, the Zangilan district (part of the East Zangezur economic region), where the new airport is being constructed, is situated in conjunction with other regional communications and projects. Currently, the restoration and construction of roads to connect the East Zangezur region with other parts of Azerbaijan are underway. These include the Horadiz-Zangilan-Aghband, Khudafarin-Lachin and Qubadli-Eyvazli highways (Fed.az, January 14). The East Zangezur region would also connect with the planned Zangezur Corridor, which would restore Azerbaijan’s direct land link with Turkey and is expected to be opened soon (though fierce Iranian opposition is mounting to the project). After these highways are completed and if the Zangezur Corridor is indeed opened, the East Zangezur region will become a regional transportation hub, and in turn, the Zangilan International Airport will become the cornerstone for this hub.

All these factors demonstrate that the Zangilan airport will become the new driver of economic development in Karabakh. With its contribution to the development of tourism and the export of locally produced products, the new airport will become an inseparable part of the development and restoration process in Azerbaijan’s liberated territories. It will also become a critical element of the international east-west and north-south transport corridors, effectively increasing the volume of international cargo transported through Azerbaijani territory. 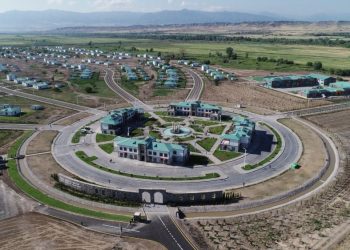