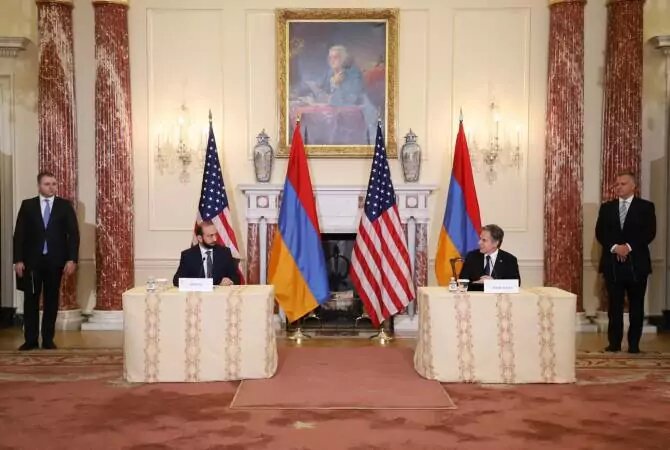 Foreign Minister of Armenia Ararat Mirzoyan meeting with US Secretary of State Antony Blinken on May 2 (Source: Armenian Foreign Ministry)

During this time, US policies on the resolution of disputes between Armenia and Azerbaijan were driven more by the dynamics of US domestic politics rather than the honest consideration of global energy security and the South Caucasus’ potential as a key link, for transit and telecommunications, between Europe, Central Asia and China.

The Azerbaijani expert community believes that current US policymakers have been struggling to find the proper balance of three primary factors while trying to formulate policies toward Azerbaijan and the conflict with Armenia: lobbying interests (Springer, August 19, 2014), ideological values (1news.az, June 8, 2015) and pragmatic considerations for US interests (T.me/CSSCBaku, August 7). Two of these variables present themselves in the paradigm of US domestic politics, as the extremely influential Armenian lobby has weaponized ideological issues, such as democracy and human rights, against Azerbaijan, attempting to tie such principles to pragmatic US interests in the region (Mit.edu, August 2002).

Many Azerbaijani analysts also believe that the Democrats are more pro-Armenian than are Republicans and that the Democrats are more inclined to follow foreign policy based on the ever-shifting paradigms of US domestic politics (Axar.az, March 19, 2021). This belief was supported during the 2020 US presidential election, which coincided with the 44-day war in Karabakh, when the Joe Biden–Kamala Harris campaign released a statement that covered all allegations of the Armenian lobby against Azerbaijan (1news.az, October 30, 2020; Joebiden.com, October 28, 2020). Although, this was a reversal of the campaign’s earlier statement that declared the US “must make clear to Armenia that regions surrounding Nagorno-Karabakh cannot be occupied indefinitely” (Joebiden.com, October 2020).

Azerbaijan also compares the current US administration’s dilemma with the position of the previous Donald Trump administration. Between April and May 2022, the US State Department adopted the Integrated Country Strategy for Azerbaijan (State.gov, April 7) and the Integrated Country Strategy for Armenia (State.gov, May 4). Armenia’s strategy does not mention anything about the occupation of the Azerbaijani territories and only once mentions Armenian membership to the Russian-led Collective Security Treaty Organization and Eurasian Economic Union.

This pales in comparison to the Trump administration’s view on Armenia. In 2018, former US Ambassador to Armenia Richard Mills demanded Yerevan to “return some portion of the occupied territories” (Evnreport.com, October 15, 2018). Also in 2018, former National Security Advisor John Bolton invited Armenia to take “decisive action” on resolving the Karabakh conflict. In response, Armenian Prime Minister Nikol Pashinyan blasted the US official’s suggestion, stating that “Bolton, or anyone for that matter, cannot speak on my behalf” (Caucasuswatch.de, October 31, 2018).

For the past 12 years, the expert community in Washington, DC, has frequently emanated the notion that the US has had important, but not vital, interests in the South Caucasus (YouTube, June 27, 2013). Additionally, the significance of Caspian Sea energy resources for global energy security has been exaggerated in the past (Carnegieendowment.org, May 31, 2017). The “reset” policy was perceived in the South Caucasus as a “conciliatory policy” or “veiled acceptance by Washington of Russian interests” in the region (Fes.de, August 2010). Since then, the US has been perceived rather as a bystander or observer in the region, up until Russia’s war against Ukraine. All these considerations shaped not only US policies but also the policies of other countries in the region, circumscribing the mediation role of the US in the conflict between Armenia and Azerbaijan.

Nevertheless, it seems the war in Ukraine has virtually ended any skepticism about the importance of the South Caucasus for US interests. Indeed, the new geopolitical reality has pushed the Biden administration to greatly intensify diplomatic activity in the region and reconsider the “reset” policy. In light of the war, it appears that the drivers of US interests in the normalization of relations between Armenia and Azerbaijan might shift from centering on US domestic politics to strategic interests in Caspian Sea energy resources and the South Caucasus’ potential as a critical node for regional transit and telecommunications infrastructure. For the first time in the past decade, this new situation pushes the US to no longer silently accept Moscow’s monopoly in negotiating Armenian-Azerbaijani relations.

In 2022, President Biden addressed three letters to Azerbaijani President Ilham Aliyev, which was an unprecedented demonstration of interest for the current US administration (President.az, March 20, May 20; Azernews.az, June 1). In the letter addressed to Baku Energy Week participants, Biden reemphasized Azerbaijan’s “critical role in helping stabilize European energy security.” Meanwhile, we are witnessing more frequent visits of US officials to the region, regular phone calls to keep apprised of Armenian-Azerbaijani relations and an increase in the release of official US statements regarding the region.

A fast resolution of Armenian-Azerbaijani disputes, along with a peace agreement, will diminish the potential threats to strategic oil and gas pipelines in the region, which, in some places, are only a few kilometers away from the trenches of both countries’ military units. Lasting peace between Armenia and Azerbaijan will also contribute to the security of the region’s vast energy and trade potential. Currently, access to Central Asian energy runs through Azerbaijan and Georgia. After the Armenian-Azerbaijani peace agreement in 2020, which opened the Zangezur Corridor and three decades of blockades, now, Armenia also presents an opportunity for a connecting link between Europe and Asia (Modern Diplomacy, March 7, 2021; Emerics.org, August 8).

The reactions from Yerevan and Baku to Washington’s mediation efforts have been quite welcoming. In a letter addressed to Biden, Aliyev noted that Azerbaijan believes the US can play a critical role in normalizing Armenian-Azerbaijani relations, opening communications, establishing people-to-people contacts and promoting sustainable peace and economic progress in the South Caucasus. (President.az, July 4). Yet, unlike Armenia, Baku does not want to see US mediation occur within the framework of the Minsk Group co-chairmanship, which includes Russia and France as well. Frequent hints in US statements about the Minsk Group irritates Azerbaijani officials and the expert community in Baku. They believe US intentions to come together with Russia in this arrangement are “unscrupulousness” in light of the war in Ukraine (Afn.az, June 26; Facebook/Farhad.Mammadov, July 27).

Azerbaijan’s position is that the Minsk Group is dead and not relevant in the region anymore. The US is strong enough to be the sole mediator, without consultations from Moscow, and attempts to revive the co-chairmanship originates from pressures of the Armenian lobby. Therefore, hardened Baku welcomes the renewed US initiatives while remaining cautious about Washington’s ability to balance lobbying interests, ideologies and strategic communications between Azerbaijan and Armenia.