After the Sochi summit, a qualitatively different stage in Armenia-Azerbaijan negotiations

The trilateral meeting between the leaders of Armenia, Azerbaijan and Russia, held in Sochi on 26 November, "was a constructive stage in the post-war peace process in the region and has opened up new prospects for peace and reconciliation between Armenia and Azerbaijan" says Vasif Huseynov in this op-ed. 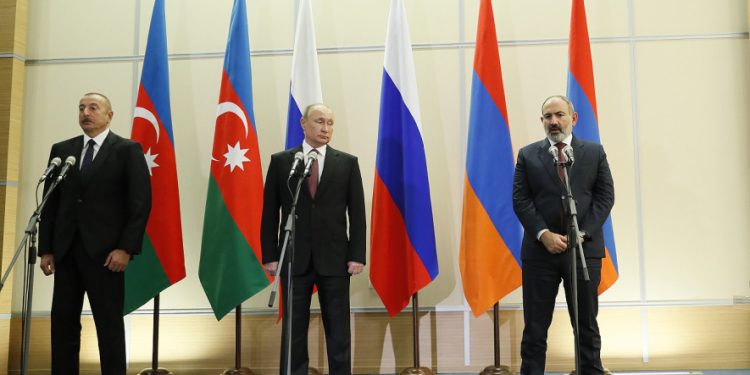 On November 26, the leaders of Armenia, Azerbaijan, and Russia came together in the Russian resort town of Sochi again in a trilateral format – the second such a meeting of the three leaders since the end of the 44 Day Karabakh War in Autumn 2020.  Some observers hastily interpreted this as Moscow’s attempt to assert its leading mediating role between Baku and Yerevan against the backdrop of the announcement of an EU-mediated meeting of President Ilham Aliyev of Azerbaijan and Prime Minister Nikol Pashinyan of Armenia in Brussels on December 15.

On the contrary, this meeting was long awaited in the region and was even leaked to the media a few weeks in advance. Although the meeting was originally scheduled for November 9, the first anniversary of the end of the 44 Day War, it was later postponed. On November 23, in his first press conference in over a year, Armenian Prime Minister admitted that the meeting was put off at his request since the proposed date symbolized a “difficult and bitter day” for Armenians.

As expected, the Sochi summit focused on two major issues of the post-war agenda: the unblocking of regional transportation and communication channels and the delimitation and demarcation of the Armenia – Azerbaijan state borders. The statement issued after the meeting did not disclose much about the adopted decisions; therefore, the meeting was incorrectly  assessed by some as fruitless.

Apparently, the major decisions agreed by the sides were not reflected in the joint statement. This is confirmed also by the statement of Russia’s President Vladimir Putin who said to reporters following the meeting that “Next week, the deputy prime ministers will summarize some of the results in Moscow and announce the decisions we have agreed on today”. This statement of President Putin referred to the Armenian-Azerbaijani-Russian working group, which was established during the January 11 trilateral leaders’ summit and headed by deputy prime ministers of the three countries.

The group was tasked with presenting action plans (including implementation schedules) to their governments regarding regional railroad and highway projects. Having met at least ten times since then, the deputy prime ministers may soon announce the outcomes of their work as announced by President Putin. The group is expected, among other things, to reveal the route through which the Zangazur corridor, the land passage linking the western regions of  mainland Azerbaijan with its Nakhchivan exclave through the southern regions of Armenia, will run

According to what was mentioned in the statement, Armenia and Azerbaijan have basically recognized the interstate borders between the two countries and agreed to peacefully resolve  border disputes. Towards this end, the sides will start the process of delimitation of the state border and then to establish a commission on bilateral demarcation with the participation of the Russian Federation.

This is a very important development for   Armenia – Azerbaijan relations. The negotiated settlement of the border disputes between the two countries would prevent the recurrence of armed escalations as seen on several occasions since the end of the 44 day war and which resulted in the death of dozens of servicemen on both sides.  .

Particularly noteworthy is the fact that neither the joint statement nor the subsequent press conference mentioned the issue of Karabakh’s status. In general, it now seems that even the Armenian side realizes that it is no longer possible or reasonable to raise this issue as before. During his November 23 press conference, Prime Minister Pashinyan, commenting on this, stated that “Based on our understanding, it is not a matter of territory, the Artsakh [the Armenian name for Karabakh] issue is a matter of law, and has nothing to do with territory”, adding that “Armenia and Azerbaijan [have already] recognized each other’s territorial integrity under the documents of the Commonwealth of Independent States (CIS) in 1991”.

Although Pashinyan did not elaborate how he sees the difference between a matter of law and a matter of territory in this context, this statement is markedly different from Armenia’s previous calls for “remedial secession” of “Nagorno-Karabakh” within the borders of Nagorno-Karabakh Autonomous Oblast of Soviet Azerbaijan. This statement and the results of the Sochi meeting therefore give ground to assume that we have entered a qualitatively different stage in   Armenia-Azerbaijan negotiations,   the parameters of which may become clearer in the upcoming months.

Based on the positive assessment of the Sochi summit by each of the three parties, those outcomes of this meeting which have so far been made public, and the fact that Azerbaijan released two more Armenian detainees prior to the summit, it can be argued that the November 26 meeting was a constructive stage in the post-war peace process in the region and has opened up new prospects for peace and reconciliation between Armenia and Azerbaijan.

This op-ed was prepared for KarabakhSpace.eu by Dr Vasif Huseynov, a Senior Advisor at the Center of Analysis of International Relations (AIR Center) and Adjunct Lecturer at Khazar University in Baku, Azerbaijan.