After Azerbaijani President Ilham Aliyev visited Albania on Tuesday in the first-ever visit of its kind, Albanian President Bajram Begaj declared the welcoming of Azeri investments and the possible establishment of diplomatic missions. 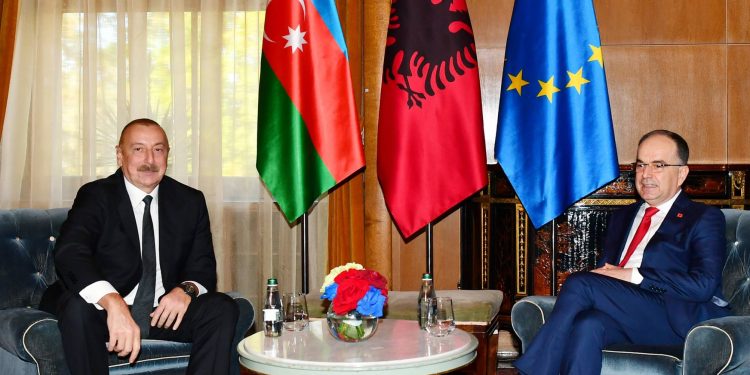 Following Russia’s invasion of Ukraine, Azerbaijan has become more interesting to the west in terms of geopolitics, due to the fact it has significant oil and natural gas reserves, something Europe is missing due to sanctions against Russia.

As expected, Begaj announced that the meeting will give a strong boost to cooperation in areas of common interest.

“Albania aims to increase cooperation with Azerbaijan in vital sectors such as energy, infrastructure and tourism, as well as to become a beneficiary country of gas transmission,” said Begaj.

He added that the Azeri proposal to open an Embassy in the country was also discussed.

“Next year also marks the 30th anniversary of the establishment of diplomatic relations between Albania and Azerbaijan, and this gives us the opportunity to see 2023 as the year when our cooperation should intensify and mark new developments,” said the president.

The EU has been strongly criticised for its stance towards Azerbaijan, courting deals with the government despite the war with Armenia, a long track record of bribery and corruption with European officials, and a less than stellar human rights rap sheet.

Despite this, the red carpet was rolled out in Tirana on Tuesday, and Aliyev was greeted by a square decorated with the country’s flags and complete with a guard of honour.

The two already met in April 2022 when they committed to strengthening ties when Rama visited Baku. At the time, the matter of natural gas was raised, as was its transit through Albania in the TAP pipeline that transports Azeri gas to Europe.

“As far as gas supply is concerned, our countries have cooperated very successfully for the TAP gas pipeline…Natural gas is contributing to Europe’s energy security. We signed the memorandum of cooperation for strategic cooperation. We plan to double the volume of gas for Europe. This gas will pass through Albania and will give additional contribution to Albania,” said Aliyev on Tuesday.