Aliyev answers questions on reconciliation, the use of force, NGOs and the role of the EU in Karabakh 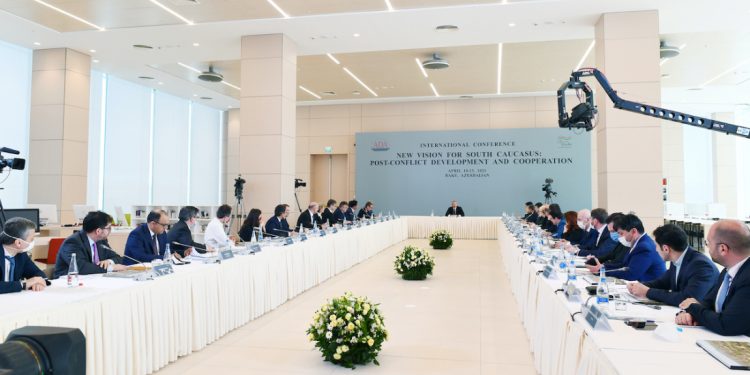 The conference was attended by global participants – including academics, representatives from NGOs and diplomats – some of who were present in Baku, whilst others attended via video link from different parts of the world. The event was livestreamed on youtube and facebook.

Amongst others, questions were asked by representatives of the European peacebuilding community.

Addressing President Aliyev, Dr Dennis Sammut, the Director of LINKS Europe in The Hague, said that war is always a costly affair and thousands of people on both sides had died as a result of the 44-day Karabakh war. The war and its aftermath had opened the prospect for the return home of hundreds of thousands of displaced persons, and this was something everyone should celebrate.

Noting that the war and its outcome had opened a number of prospects for regional co-operation, Dennis Sammut asked the President two questions. Firstly, whether his assertion that “the Karabakh conflict is over” means that “Azerbaijan is renouncing the to use of force to regain what is left of Nagorno-Karabakh under Armenian control”. And secondly, whether Azerbaijan would consider the idea “that the [10 November] trilateral declaration be embedded in a United Nations Security Council resolution that would somehow give it global and international legitimacy and make sure that all the parties abide by its provision”.

First addressing the second question, Aliyev admitted that they “did not think about any kind of international legitimisation of this resolution”, adding, “We were not approached by neither Russian nor Armenian sides in that respect, so it was not something that we considered”. “We saw that the declaration is signed and Russian peacekeepers are there; the declaration is fully implemented and the most important thing is that it is being implemented,” he added. The President expressed doubt in the value of such an exercise, raising the previous UN security council resolutions in relation to Nagorno-Karabakh:

“They were on paper and would have been on paper maybe for 30 more years if we didn’t do what was right on the battlefield. Therefore, what will it add to what we have?”

“With respect to use of force against the territory of Karabakh, which is now inhabited by Armenians, no we don’t have such plans. I said the Nagorno-Karabakh conflict is over. It was resolved. Those Armenians who live now in the territory controlled by Russian peacekeepers, we consider them as our citizens, and what we have done so far in respect to our humanitarian assistance and logistical support has demonstrated these intentions.”

The President warned, however, that “if Armenia would plan any kind of hostile operations against Azerbaijan […] If we see that there is 1% risk to Azerbaijani people or our territorial integrity, we will use all of our means in order to protect ourselves, but we will never in the future initiate any kind of hostile operations if we are not provoked.”

Dr Laurence Broers, the Caucasus Programme Director of Conciliation Resources in London, asked Aliyev about the role of civil society and peacebuilding in his new vision for the region now that he sees the conflict as being resolved. The President stated that he believed they played a “crucial role”, and that there was “big room for civil society to make steps with respect to reconciliation”. Aliyev claimed that previous steps to build bridges between the societies had been prevented by Armenia, who “were afraid that there could be some rapprochement”, but said he no longer thought “they are in this position”. He expressed the need to deliver Azerbaijani messages to Armenian society and finished by saying:

“Therefore I think that international organisations – especially those that have experience of these kind of issues of post-conflict reconciliation or normalisation, confidence-building measures – I think we should count a lot on the support of international NGOs and Azerbaijan is ready to work with them on this issue.”

The Brussels-based European Policy Centre’s Senior Policy Analyst, Amanda Paul, highlighted Azerbaijani criticism of the EU during last year’s war and asked the President about how the EU could “regain its credibility and influence in the post war period”. Aliyev responded by denying that there had been and serious criticism “of the EU as the EU” during the conflict by him or the Azerbaijani establishment, and that he had been in contact with the president of the European Council during the conflict to inform him of the situation. He did, however, criticise the position of some individual “EU leading member states”, but acknowledged that “they acted in their national capacity during the war but not as an EU member state”.

In terms of the EU’s role in post-conflict development, the President stated that he had not had indication from the EU that it wished to help with the reconstruction of the areas under Azerbaijani control or the resettlement of refugees, which he acknowledged “will be a huge task for us, not only from the point of financial resources, but from methodology”. He noted that “if international organisations, including the EU, will consider the provision of any assistance, we will be grateful”. Aliyev discussed COVID-19 support that he was working out with the EU, and said, “we are planning to continue our close cooperation with the EU and even those EU member states that during the war and after the war were attacking us. I think they also need to – some of them already – make changes in their attitude”. The President finished his answer by stating, “we hope that the EU will continue to be our big partner, especially as with nine members of the EU, we already have a strategic partnership format of co-operation”.

During the event, President Aliyev also stated that Azerbaijan was ready to sign a peace agreement with Armenia, and that his country has no territorial claims on the Republic of Armenia.