Andrew Korybko: Azerbaijan’s victory in the Karabakh war is a win for Russia and Turkey and a loss for the United States

At the international level, the victory of the liberation Azerbaijani army in the Karabakh war was also the victory of Russia and Turkey over the West. American political scientist Andrew Korybko comments on the outcome of Azerbaijan's Patriotic War. 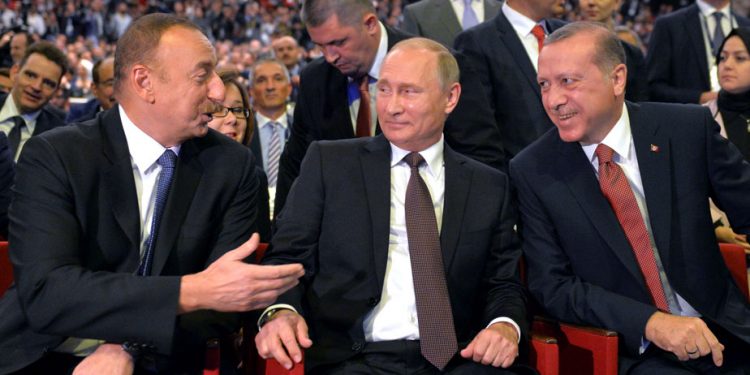 “I believe that, apart from Azerbaijan, who defeated Armenia on the battlefield, both Russia and Turkey became the winners on a broader scale, while the United States and, to a lesser extent, the European Union, ended up the losers,” Korybko said.

“The beginning of the hostilities last year is Armenia’s fault. Four UN Security Council resolutions demanding Armenia’s withdrawal from the occupied territories of Azerbaijan had been ignored for three decades, and all this time Azerbaijan had the right to liberate its territories. When the fighting began, Armenia from the position of weakness and despair tried to involve Russia in the conflict,” the expert looked back at how things had been in the fall of 2020.

Representatives of the Armenian diaspora in the West were the masterminds behind the efforts to involve Russia in the Karabakh war. “Nikol Pashinyan came to power through a ‘velvet revolution’ orchestrated by the ultranationalists of the Armenian diaspora in the United States and France. Through the Soros Foundations, they completely infiltrated Armenian society, especially after the ‘revolution’. As a matter of fact, they were able to do in Armenia what Fethullah Gülen tried to do in Turkey. It was the diaspora that pushed Armenia to a dangerous and disastrous situation, as a result of which Azerbaijan’s military liberation campaign began,” Andrew Korybko pointed out.

Terrorist attacks on Ganja too were organized with the purpose of involving Russia in the Karabakh war. “During the war, missiles were launched at Ganja several times—targeting not the combat areas, not the conflict zone, but a peaceful city 60 km from the front. Armenia claimed that Azerbaijani military had been the target, but there are pictures showing that the missiles struck residential buildings. Why? To provoke Azerbaijan’s proportional response targeting the territory of Armenia, so that Yerevan could demand that Russia and CSTO intervene. For the same reason, the Armenian diaspora wanted Turkey to join the war on the side of Azerbaijan causing a major escalation of hostilities,” he said.

“Of course, not all of the Armenian diaspora in the US and France wanted this, only its ultra-nationalist and ideologized faction. I think it lost in the end. Its goal was to provoke a war between Russia and Turkey, but we can see that Russia and Turkey are coordinating their actions. The United States tried and are still trying to drive a wedge between Turkey and Russia through a hybrid war, but these efforts are failing thanks to the responsible actions of the authorities of the two countries, primarily Presidents Vladimir Putin and Recep Tayyip Erdoğan. They were able to show that Russia and Turkey, historical rivals in the past, are effectively cooperating for the benefit of their peoples,” the American expert said.

“Thus, Russia’s global strategy aimed at Russia becoming a balancing force in Eurasia has worked in the region. Moreover, Moscow has succeeded not only in the South Caucasus, but also in relations with Turkey, as Ankara is now one of its strategic partners,” Andrew Korybko concluded.