Turkish-Azerbaijani "relations have risen to the level of strategic alliances. However, we have a long way to go and goals to reach," Jeyhun Bayramov, Azerbaijan's foreign minister, said at the 13th Ambassadors Conference in the Turkish capital Ankara. 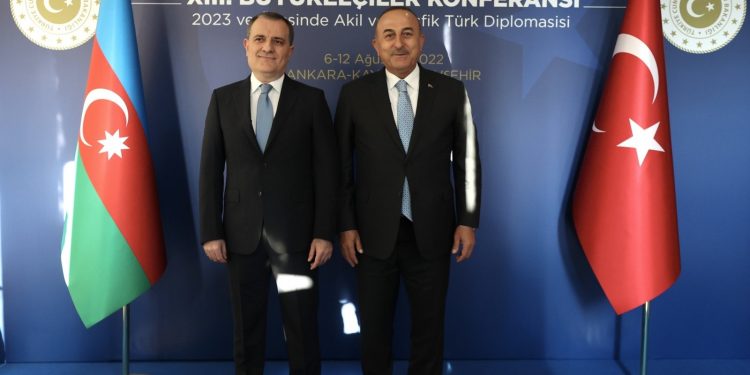 Citing Türkiye’s rising role as an international actor and diplomatic successes, Azerbaijan’s top diplomat on Monday said Türkiye “has become one of the leading countries in the development and implementation of innovations in diplomacy, as in many other fields.”

“The increasing social injustice and disregard for human values in the current international system, especially in a crisis situation, is another factor that worries each of us today. We observed the most obvious example of this during the COVID-19 pandemic, which was a serious test for our humanity,” he added.

Bayramov hailed ties between the two countries and praised Türkiye’s role in the international arena.

“We welcome Türkiye’s transformation into a leading and central country in diplomacy, and we take your success as our own,” he said.

Bayramov added that Türkiye marked its place in history as a country that stands by the truth, righteousness and justice through its political and diplomatic support to Azerbaijan when it liberated its lands from occupation.

Relations between the two former Soviet countries have been tense since 1991 when the Armenian military occupied Karabakh, a territory internationally recognized as part of Azerbaijan, and seven adjacent regions.

New clashes erupted in September 2020 and the 44-day conflict saw Azerbaijan liberate several cities and more than 300 settlements and villages that were occupied by Armenia for almost 30 years.

Türkiye was a key backer of Azerbaijan during the 44-day Nagorno-Karabakh war between Azerbaijan and Armenia, which erupted on Sept. 27, 2020, and ended with a Russian-brokered cease-fire and sizeable Azerbaijani gains on Nov. 10.

President Recep Tayyip Erdoğan said Saturday that the international community “unfortunately” kept silent when Azerbaijani territories were occupied by Armenia until the fall of 2020, when with Turkish help, Azerbaijan took back its land.

“To put an end to this injustice, the support of Türkiye was given to the Azerbaijani Armed Forces. Thanks to an epic struggle that lasted for 44 days, Karabakh regained its freedom, and the 30-year occupation came to an end,” he said, referring to the fall 2020 conflict.

“With the agreements reached, a new era started in the South Caucasus. We are working hard to ensure that this historic opportunity is not wasted.”

Türkiye and Armenia have since taken “important steps” toward peace in the Caucasus, and have appointed representatives to normalize ties, Erdoğan said.

“I believe that our region will be stabilized in a short time if Armenia reads the developments correctly and responds to the sincere calls of Azerbaijan and Türkiye,” he added.

On last week’s flare-up of violence between the Caucasus nations of Armenia and Azerbaijan, Foreign Minister Mevlüt Çavuşoğlu also said Türkiye “once again warns Armenia not to engage in new provocations.”

When Azerbaijan in the fall of 2020 liberated territory in Karabakh that was occupied by Armenia for nearly three decades, said Çavuşoğlu, Türkiye stood for justice and supported the righteous and truthful side.

Meanwhile, Russian President Vladimir Putin and Armenian Prime Minister Nikol Pashinian discussed the developments in Karabakh and security issues on the Armenia-Azerbaijan border in a phone call on Monday, the Kremlin said in a statement.

The Kremlin last week called for restraint from both sides after Azerbaijan said its forces had foiled an Armenian attack near Karabakh, formerly referred to as Nagorno-Karabakh.

Azerbaijan announced that it has regained control of several strategic locations in the Karabakh region, in a new escalation after Armenia attacked and killed an Azerbaijani soldier.

Azerbaijan has repeatedly pointed to Armenia’s failure to meet the provisions of the Nov. 10, 2020 agreement signed by the two nations plus Russia, drawing particular attention to how Armenian armed groups have not yet pulled out of Azerbaijani territories in Karabakh, said a ministry statement.

In January 2021, the leaders of Russia, Azerbaijan and Armenia signed a pact to develop economic ties and infrastructure to benefit the entire region. It also included the establishment of a trilateral working group in Karabakh.

After the conflict ended, Azerbaijan launched a massive reconstruction initiative in the liberated Karabakh region.

In July, Azerbaijan began the process of returning its people to land recaptured from Armenian forces in what Baku calls “The Great Return.” The oil-rich country has vowed to repopulate the recaptured lands.

Azerbaijani President Ilham Aliyev had for years promised to recapture lands lost in the 1990s and the first returns marked a symbolic moment for Azerbaijan.

On June 15, 2021, Türkiye and Azerbaijan also signed a declaration “on allied relations” aimed at deepening ties in several areas of cooperation, including security, during a visit to Shusha, a city that Azerbaijan liberated from Armenian occupational forces in the conflict. The city, known as the pearl of Karabakh, was occupied by Armenia on May 8, 1992.

The declaration focuses on defense cooperation and establishing new transportation routes, affirming the joint efforts by the two armies in the face of foreign threats, and the restructuring and modernization of their armed forces.

Ankara has made frequent calls for a six-nation platform comprising Türkiye, Russia, Iran, Azerbaijan, Georgia and Armenia for permanent peace, stability and cooperation in the region, saying it would be a win-win initiative for all regional actors in the Caucasus.

Türkiye believes that permanent peace is possible through mutual security-based cooperation among the states and people of the South Caucasus region.