The talks follow up the EU-mediated meeting on August 31 in Brussels between the leaders of the two nations. 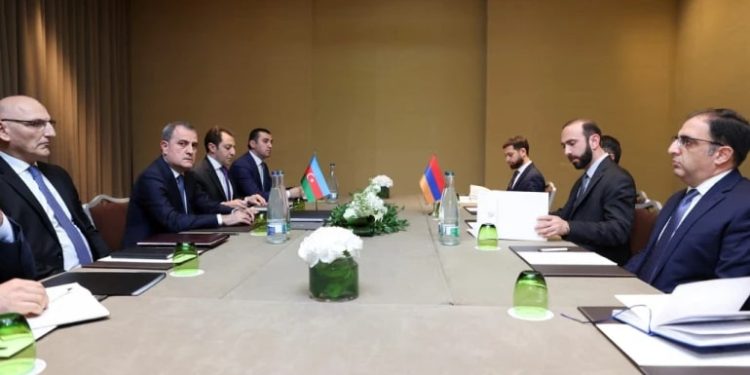 The foreign ministers of Armenia and Azerbaijan have held talks in Geneva on a future peace treaty, according to officials in Baku and Yerevan, following recent deadly clashes between the arch-foes.

Last month, at least 286 people were killed on both sides before a United States-brokered truce ended the worst clashes since the Caucasus neighbours’ 2020 war.

Baku and Yerevan fought two wars – in 2020 and in the 1990s – over the contested region of Nagorno-Karabakh, an Armenian-populated enclave of Azerbaijan.

Armenia’s Foreign Minister Ararat Mirzoyan and his Azerbaijani counterpart Jeyhun Bayramov met on Sunday in Geneva to begin “drafting the text of the peace treaty”, the foreign ministry in Baku said on Monday.

It said the talks followed up the EU-mediated meeting on August 31 in Brussels between Azerbaijani President Ilham Aliyev and Armenian Prime Minister Nikol Pashinyan.

Azerbaijan called for “full withdrawal of the Armenian armed units from the territories of Azerbaijan, the opening of transport and communication lines”, the ministry said in a statement.

Armenia’s foreign ministry said, “The parties exchanged ideas on the peace treaty, ensuring the rights and security guarantees of the Armenians of Nagorno-Karabakh.”

It reaffirmed its demands of Azerbaijani troops’ “withdrawal from the sovereign territory of Armenia”, release of POWs and “the introduction of international mechanisms for controlling the situation on the border”.

The two foreign ministers last met for talks mediated by US Secretary of State Antony Blinken on September 20 in New York.

The six-week war in 2020 claimed the lives of more than 6,500 soldiers from both sides and ended with a Russian-brokered ceasefire.

Under the deal, Armenia ceded swaths of territory it had controlled for decades, and Moscow deployed about 2,000 Russian peacekeepers to oversee the fragile truce.

With Moscow increasingly isolated on the world stage following its February invasion of Ukraine, the US and the European Union have taken a leading role in mediating the Armenia-Azerbaijan normalisation process.

When the Soviet Union collapsed in 1991, ethnic Armenian separatists in Nagorno-Karabakh broke away from Azerbaijan. The ensuing conflict claimed about 30,000 lives.