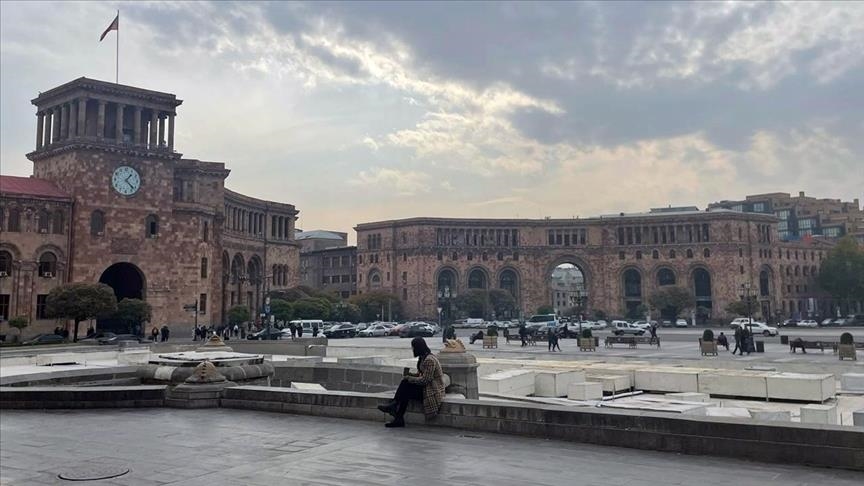 As Azerbaijan, the winner of the 44-day Second Karabakh War in 2020, was busy with projects to rebuild the devastated region after 30 years of occupation, Armenia dealt with internal turmoil.

Armenian Prime Minister Nikol Pashinyan went down in history as a leader who did not lose his power despite a chaotic defeat. However, he faced a year-long military memorandum and subsequent protests, assassination attempts, early elections, opposition declaring national resistance against the election results, cease-fire violations, normalization with Turkey, and peace negotiations with Azerbaijan.

Although 2021 ended with diplomatic traffic between Ankara, Baku, and Yerevan, the will of the Armenian people will show whether peace will prevail in the region in 2022.

Pashinyan, who came to power after the hope-filled Velvet Revolution in 2018, quickly turned to nationalist populism to ensure his legitimacy because his coming to power signified the decline of the 20-year-old Karabakh clan — the rule of Karabakh Armenians Robert Kocharyan and Serj Sarkisyan from 1998 to 2018.

Pashinyan soon abandoned his promises about the fight against corruption and peace negotiations and turned to policies that were sharp enough to use the slogan of “unification” with the Nagorno-Karabakh regime.

As a result on Nov. 9-10, 2020, there was a cease-fire agreement that led to a radical change in the region and confirmed the victory of Azerbaijan.

2021 started under the shadow of the Russian peacekeeping force stationed in Nagorno-Karabakh.

The ongoing protests and anti-Pashinyan rhetoric since the cease-fire agreement gave birth to one of the biggest depressions in the country’s history on Feb. 25.

The opposition, led by Kocharyan and Sarkisyan, poured thousands of dissidents onto the streets of Yerevan.

Pashinyan responded with counter-rallies taking political tensions in the country a notch higher.

On March 28, the decision for early elections was taken.

Pashinyan won the election setting a rare example in history.

In an economy worsened by war, Armenians were faced with the pandemic.

Pashinyan was brought back to power with 54% of the votes. The voter turnout was 49.4%, but the obvious fact remained that Pashinyan was elected not with great support, but against the “Alliance of Armenia”, which offered nothing but warlike and revanchist policies.

Kocharyan, the leader of the Armenian Alliance and the former president had to recognize the elections. But he declared that they would fight the Pashinyan government in the streets as well as Parliament in the second half of the year.

The Karabakh clan and other far-right and racist groups have declared Pashinyan a Turkish agent and a traitor.

These allegations, promoted by Kocharyan and Sarkisyan through the media, social media, and political channels, appeal to nationalist voters.

The Armenian Revolutionary Federation Party is the closest ally of the Karabakh clan, which has established oligarchic mafia networks in Armenia and has seeped into the army over the past 20 years.

Former President Levon Ter-Petrosyan, who is not officially part of this bloc and who had a moderate stance toward Turkey and Azerbaijan in the 90s, has also accused Pashinyan of treason.

Despite strong criticism, Pashinyan’s popularity and credibility in the eyes of the public are higher than other political figures.

Renewed relations with Turkey and Azerbaijan

After the cease-fire agreement, the leaders of Azerbaijan and Armenia met for the first time in Moscow on Jan.11.

The leaders read a joint statement with Russian President Vladimir Putin and announced their decision to build infrastructure, transportation, and trade networks that will extend from Iran to Russia on the north-south line and from Azerbaijan to Turkey on the east-west line.

At this point, the Zangezur corridor — connecting Nakhchivan, Azerbaijan, Turkey, and Central Asia — is of primary importance.

Another call for peace with Armenia came with the Shusha Declaration announced by Turkish President Recep Tayyip Erdogan and Azerbaijani President Ilham Aliyev on June 15.

Pashinyan responded positively to Aliyev’s messages with the aim to open the country to the world and break the power of tutelage groups such as the Karabakh clan.

Achieving this is difficult, but not impossible, given Armenia’s military and political dependence on Russia. Considering that the EU, US, and Georgia mediated the negotiations between Baku and Yerevan on different occasions.

Armenia has the highest unemployment rate and the lowest national income in the South Caucasus. The economy, which contracted especially during the pandemic period, started to show signs of recovery in the second half of 2021. Although it is stated that the unemployment rate decreased to 15.3% in the third quarter, the problems of the younger population continue.

The country lost more than 4,000 soldiers in the Second Karabakh War. However, the tutelage groups that do not give up their belligerent and revanchist rhetoric continue to put forward policies that hinder the prosperity and stability of Armenia. At this point, it is necessary to draw attention to the regime in Nagorno-Karabakh. The Nagorno-Karabakh leadership criticizes Pashinyan’s statements about the normalization and improvement of relations with Turkey and Azerbaijan and declared that it would not accept this betrayal.

Ogul Tuna, is working on his doctorate in the History Department at the University of California Irvine (UCI) and is the Director of Ankara Center for Global Politics.