Armenian and Azerbaijani experts discuss the role of confidence-building measures in support of lasting peace in the South Caucasus during a workshop in Kachreti, Georgia

Armenian and Azerbaijan academics, policy experts and think tank representatives met in Kachreti, Georgia, on Thursday 30 September 2021 to discuss “How confidence-building measures can contribute to lasting peace in the South Caucasus”. 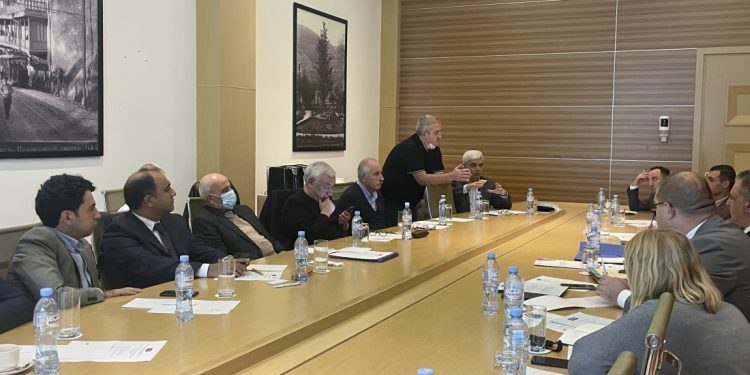 The workshop was organised by LINKS Europe in association with the Centre for Political and Economic Strategic Studies of Armenia and the Caucasus Policy Analysis Centre of Azerbaijan, with the support of the European Union.

The activity was part of LINKS Europe long standing engagement in support of the peaceful resolution of conflicts in the South Caucasus, ongoing since 1997, and particularly the programme to develop confidence-building measures in support of ongoing peace processes initiated in 2016.

Participants in Kachreti at the start of their meeting held a one minute of silence to honour the memory of all Armenians and Azerbaijanis that died in the recent 44 Day Karabakh war.

During the meeting, which was held in a constructive and business-like manner, participants assessed the current state of Armenia-Azerbaijan relations, and peace and conflict issues in the aftermath of the 44 day Karabakh War, and prospects for peace in the South Caucasus. They positively evaluated different peace initiatives currently being discussed and proposed and expressed their readiness to engage with the track 1 peace processes in order to contribute to creating the right conditions for their success.

The meeting identified several practical ideas for possible confidence building measures, and agreed to work to further elaborate them. For this purpose three working groups and three contact groups were created. The WGs focus are: CBMs and Engagement with the Track 1 political process; CBMs and Engagement with Humanitarian, Cultural and Educational Issues; and CBMs and engagement with Economic activity, connectivity and diversity. The contact groups will deal with media issues, youth affairs and women and gender issues.

The meeting was facilitated by LINKS Europe. Representatives of the Office of the EU Special Representative for the South Caucasus and the conflict in Georgia were in attendance.