Armenian lobby cannot force US to stop aid to Azerbaijan

Convulsing in a fit of hysteria, the Armenian National Committee of America (ANCA) keeps trying to pressure the US government, including Biden, to reduce aid to Azerbaijan, but increase it for Armenia and the fictional, non-existent "Artsakh". 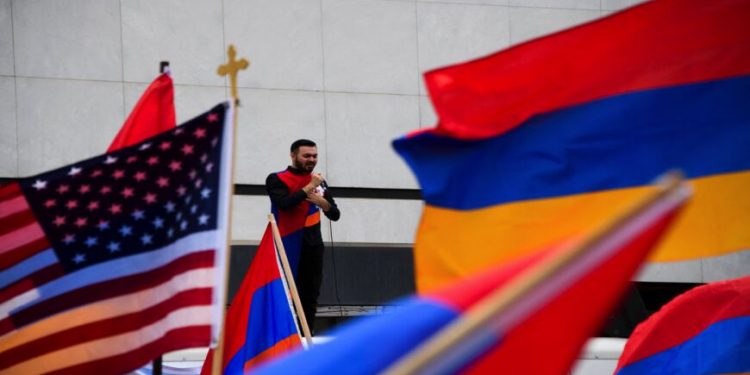 The parasitic Armenian lobby in the US is demanding as much as $50 million. At the same time, the Armenians wonder why “Azerbaijan has not yet been held accountable”, as neither the Trump administration nor the Biden administration investigated their claims about Turkey’s so-called “role in the Azerbaijani aggression”, the recruitment of jihadist mercenaries from Syria and Libya and the use of Turkish F-16s “in the attacks(?) of Azerbaijan on Karabakh”.

In an attempt to get extra funds for its corrupt expenses, the ANCA is trying to mislead the US government by presenting “facts” that could not be further from the truth. As always, the Armenians provide no evidence, only words. Meanwhile, Azerbaijan, as we recall, has irrefutable evidence that, first of all, Armenia recruited mercenaries from Syria and Libya (there are dozens of found and documented facts), and second, there was no so-called “role of Turkey”, let alone ” Azerbaijani aggression”.

During the 44-day war, Turkey, as a brotherly nation, provided moral support. There was not a single documented use of F-16s: these aircrafts did not take off once throughout the war and satellite photos prove that.

Moreover, it is silly and ridiculous to talk about Azerbaijan’s “attack” and “aggression” on its own land, its own Karabakh. The military action was provoked by Armenia, and the Azerbaijani army responded with a counter-offensive, which resulted in us liberating our lands from the 30-year-long Armenian occupation. The aggressor was Armenia, and the whole world knows that perfectly well.

It is also common knowledge that our country has always advocated for peace and is now proposing a peace treaty which will only improve the lives of the Armenian people. The US State Department is well aware of this and its recent statement says that the United States is committed to a peaceful, democratic and prosperous future in the South Caucasus.

No matter what the withering ANCA may attempt, the reality is that Azerbaijan is in the zone of the US interests, especially at the current stage of bilateral cooperation, suggesting that relations with our country are among the priorities of this superpower’s foreign policy. While this is certainly a positive fact, it is also a natural one. Azerbaijan, as the only leader in this strategically vital region, is of special interest to the United States, primarily because of its understanding that a partnership with our country in any field guarantees success. The Americans are well aware that Azerbaijan led by President Ilham Aliyev is not just a partner in the region, but a reliable, time-tested strategic ally.

Despite all the attempts of the Armenians and of the American politicians bought by them, the US wants to continue providing aid to our country, and this is a direct proof that the current Biden administration does not care about the Armenian agenda. Yes, he made token promises to get their votes, and now he is doing what he wants to do, what benefits the US. The ANCA’s latest pointless tantrum only proves that the Armenian lobby is beginning to realize that it is quickly losing its influence.

Commenting for Day.Az on the ANCA’s ridiculous actions, researcher Robert Cutler of the Canadian Global Affairs Institute said: “The Armenian lobby in the United States is seriously concerned that US President Joe Biden’s administration has refused to support the Armenian separatists in Karabakh financially in the following year. On top of that, the amount of financial aid to Armenia was cut nearly in half (from $45 million to $24 million—Ed.). I believe that the ANCA campaign aimed to stop any form of aid to Azerbaijan will fail.”

P.S. The Armenian diaspora cannot grasp how Azerbaijan, who does not have an influential lobby in Congress or a wealthy community in the US willing to pay for lobbying, is achieving these results. As always, the Armenians overlook the fact that the country where they settled has its own interests that have nothing to do with the Armenian ones. Therefore, it is absurd of them to demand $50 million from the US.