This has created a conundrum in the peace treaty negotiations as Baku expects Yerevan to recognize Karabakh as part of Azerbaijan and the Karabakh Armenians to become citizens of the Republic of Azerbaijan. 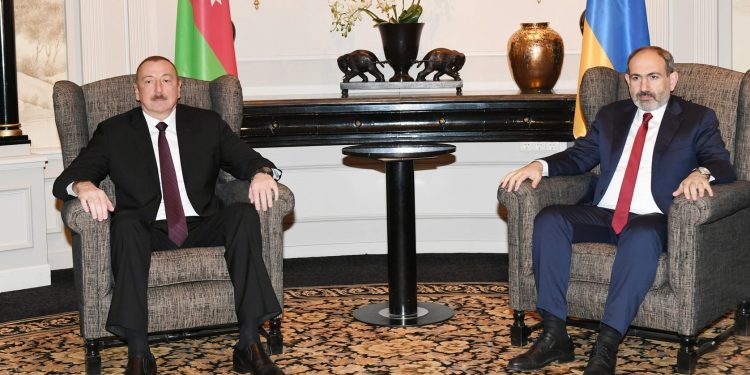 At that time, Brussels hosted a trilateral summit of Azerbaijani President Ilham Aliyev and Armenian Prime Minister Nikol Pashinyan via the mediation of European Council President Charles Michel. The summit was organized within the timeframe proposed at the previous summit of the three leaders on May 22, which served as a breakthrough in peace negotiations with “tangible progress” on numerous issues, including the delimitation and demarcation of the Armenian-Azerbaijani state border as well as transport and communication links (see EDM, May 31). The most important publicly known outcome of the latest meeting, the fourth such summit mediated by the European Union since December 2021, concerns a number of peace treaty initiatives between Armenia and Azerbaijan.

Following the summit, in a statement to the press, Michel declared, “Today, we agree to step up substantive work to advance on the peace treaty governing inter-state relations between Armenia and Azerbaijan.” (Consilium.europe.eu, August 31). To work on the treaty’s draft text, the foreign ministers of both countries agreed to meet in September 2022, which will be followed by the next summit in November, according to Michel.

Immediately following the summit, both Aliyev and Pashinyan spoke positively about the prospects of signing a peace treaty in the near future. “I think that we can finalize and sign a peace agreement within several months. I think this is realistic if the Armenian side expresses the same will,” Aliyev expressed in an interview with the Italian newspaper, Il Sole 24 Ore (Azertag.az, September 4). In a similar vein, a pro-government Armenian publication quoted Pashinyan as saying in a closed meeting with parliamentarians that his country is ready to sign a peace treaty with Azerbaijan by the end of 2022 (Civic.am, September 5).

Azerbaijan had proposed a peace treaty with Armenia in the aftermath of the Second Karabakh War in 2020. In early March 2021, Azerbaijan, through mediators, submitted a proposal containing fundamental principles for normalizing relations with Armenia which, most importantly, included mutual recognition of each other’s territorial integrity and mutual confirmation on the cessation of territorial claims against one another (Mfa.gov.az, March 14).

Notably, the government of Pashinyan accepted these proposals but added that they do not encompass all the pressing issues in their bilateral relations. In its response, Yerevan stressed that the peace agenda should also include “security guarantees of the people of Nagorno-Karabakh, the protection of their rights and freedoms, as well as the clarification of the final status of Nagorno-Karabakh” (Armenpress, April 7). According to a recent statement by Armenian Foreign Minister Ararat Mirzoyan, “The position of the Armenian side regarding the five provisions proposed by Azerbaijan remains unchanged” (MassisPost, September 4).

This has created a conundrum in the peace treaty negotiations as Baku expects Yerevan to recognize Karabakh as part of Azerbaijan and the Karabakh Armenians to become citizens of the Republic of Azerbaijan. In an interview with Azerbaijani television on August 13, Aliyev reaffirmed his government’s position stating that those who, out of populism, talk about some status or independence for Armenians in Karabakh are “the main enemies of the Armenian people” (Azertag.az, August 13). He argued, “Because the Armenians living in Karabakh will not have any status, independence or advantages. They will live like all citizens of Azerbaijan. Their rights will be protected the way the rights of Azerbaijani citizens and peoples living [in Azerbaijan] are protected.”

One possible solution to this conundrum would be mutual recognition of both countries’ territorial integrity in the first stage of peace negotiations, leaving questions concerning the rights and protections of Armenian residents in Karabakh to the next stages. Armen Grigoryan, secretary of the Armenian Security Council, in an interview with Armenian media in late July 2022, pointed to this possibility. “There is an idea to separate the Nagorno-Karabakh issue from Armenia-Azerbaijan relations. We must now actively discuss that option and decide how to proceed,” he said, adding that it would mean signing a peace treaty with Azerbaijan without a final solution to “the Nagorno-Karabakh issue” (1lurer.am, July 29).

Pashinyan, since November 2021, has, on a number of occasions, admitted that Karabakh is recognized in international documents as belonging to the Republic of Azerbaijan (News.am, December 25, 2021). In April 2022, following the second EU-mediated trilateral summit in Brussels, the Armenian leader announced before the parliament in Yerevan that the international community is telling Armenia to “lower your bar on the status of Nagorno-Karabakh a little”—apparently implying the abandonment of claims to the independence of the “Nagorno-Karabakh Republic” (1lurer.am, April 13).

At the time, these statements suggested that a shift could occur in the Armenian government’s position to be officially reflected in a peace treaty. Indeed, a number of developments between the May 22 and August 31 summits suggested that it would be possible for the two countries to sign a peace treaty and open a fresh chapter in bilateral relations (Commonspace.eu, September 2). However, the military escalation along the Armenian-Azerbaijani state border on September 13–14 and societal protests in Armenia against Pashinyan’s statements regarding a possible peace treaty demonstrate that the region may still be far away from lasting peace and stability.