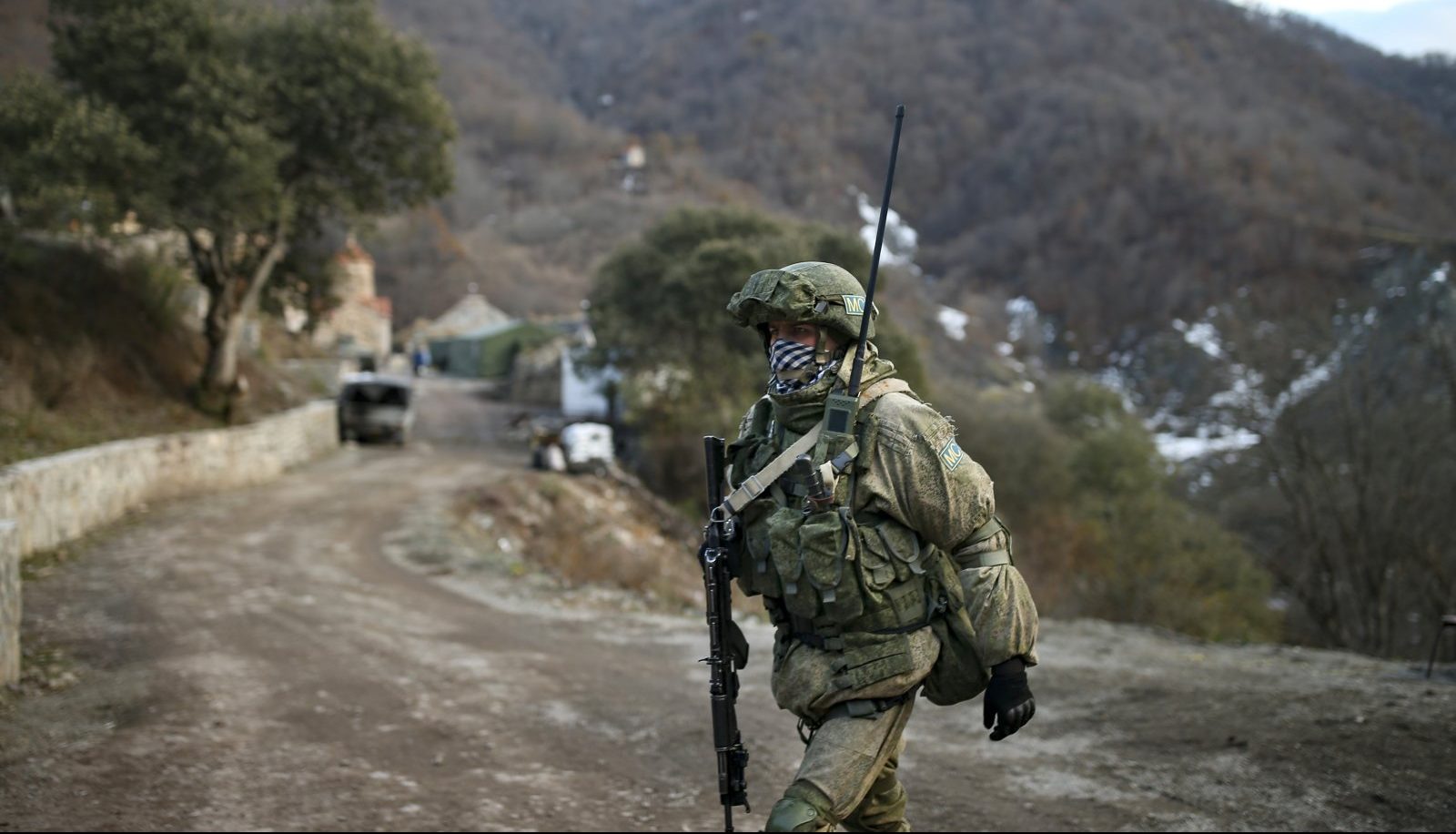 A Russian peacekeeper guards an entry point of Dadivank, an Armenian Apostolic Church monastery dating to the 9th century, after the transfer of the Kalbajar region back to Azerbaijan as part of a peace deal that required Armenian forces to cede Azerbaijani territories they previously occupied outside Nagorno-Karabakh, near Kalbajar, Azerbaijan, Wednesday, Dec. 2, 2020. (AP File Photo)

On September 6–10, Azerbaijan and Turkey held joint special forces exercises in the Lachin region of Azerbaijan, marking the first time Turkish troops carried out military operations in the Azerbaijani territories liberated as a result of the 44-day Second Karabakh War (September 27–November 9, 2020) (Mod.gov.az, September 6, 11). This was only one of a series of joint military exercises between the two countries in September, some of which would also involve forces from Pakistan (Mod.gov.az, September 7, 10, 11). In a move to further deepen bilateral military cooperation, Ankara has upgraded the representation of the Turkish Armed Forces in the “Azerbaijan Operational Group” (an entity established in 1992 but hitherto represented at a lower level) by appointing four generals to its leadership (Yeni Shafak August 26).

According to geolocated estimations by some observers, based on the photos shared by the Azerbaijani Ministry of Defense, the September 6–10 exercises were held within 300 meters of the Lachin corridor, a land passage controlled by Russia’s peacekeeping contingent physically linking Armenia and the Karabakh region (Twitter.com/NKobserver, September 6). This analysis was confirmed by Haqqin.az, an Azerbaijani news outlet believed to be close to the government, which reported, “Azerbaijani and Turkish special forces have set up camps along the [Lachin] corridor […] practicing joint combat operations in difficult mountain conditions” (Haqqin.az, September 7).

The military drills by the Azerbaijani and Turkish troops in the vicinity of the Lachin corridor came on the heels of recent military exercises held within this corridor by units from the Russian peacekeeping mission. The Russian drills officially aimed at “preventing violations by drones of a potential enemy and ensuring security of the observation posts on the Lachin corridor” (Mil.ru, August 30). But Haqqin.az argued that these exercises by the Russian peacekeepers were meant to signal to Armenian society about Moscow’s readiness to ensure the protection of the corridor (Haqqin.az, September 7). Russia might have felt it necessary to send such a message as rumors had spread in Armenia following the recent Goris–Kafan road incident (Armenpress, August 27) that Azerbaijan would also seek to restrict movement through the Lachin corridor (Yerevan.today, August 24). The Azerbaijani media, therefore, presented the Azerbaijani-Turkish drills as a “special warning” against any provocation in the Karabakh region (Haqqin.az, September 7).

Tensions between Azerbaijan and the Russian peacekeeping contingent have been surfacing ever more frequently in recent weeks. One major bone of contention between Baku and Moscow stems from the latter’s failure to stop the transfer of Armenian military forces to the Karabakh region, which is partially under temporary control of Russian peacekeepers. Although the trilateral ceasefire deal of November 10, 2020, signed by the leaders of Russia, Armenia and Azerbaijan, envisaged the withdrawal of Armenian troops from the Karabakh region in parallel with the deployment of Russian peacekeepers, Moscow has yet to ensure its implementation (President.az, November 10, 2020).

On August 11, 2021, after a series of armed confrontations between Azerbaijani and Armenian forces in Karabakh, Azerbaijan’s Ministry of Defense broke its silence: the ministry called upon Russia to put an end to the deployment of the Armenian Armed Forces in the territories of the Republic of Azerbaijan, in accordance with the provisions of the November deal (Interfax, August 11). On August 12—a day after this statement—Russia for the first time blamed Azerbaijan for allegedly violating the ceasefire and carrying out strikes against the Armenian Armed Forces in Karabakh—raising eyebrows in Baku (Mil.ru, August 12).

Another source of tensions between Russia’s peacekeeping mission and Azerbaijan is related to the disguised travels of Iranian vehicles (mainly trucks) to the Karabakh region without the express permission of the Azerbaijani government (Minval.az, April 16). The fact that these vehicles enter Karabakh through the Russian-controlled Lachin corridor habitually sparks outrage in Azerbaijan. On September 12, the Azerbaijani defense ministry said it had sent letters to the Ministry of Defense of the Russian Federation and the Command of the Peacekeeping Forces, protesting against the illegal entry into the Karabakh region of vehicles belonging to other countries, and “asked [the Russian side] to prevent them,” stressing that this situation contradicts the ceasefire accord of November 10, 2020 (Mod.gov.az, September 12).

The parties to the November deal have yet to reach an agreement concerning the mandate of the Russian peacekeeping forces. From the statements of the Armenian side, it can be inferred that there is a document proposed by Russia and approved by Armenia to define the legal framework of the peacekeeping mission; but Azerbaijan apparently has not signed it (Panorama.am, September 2). However, according to Hikmet Hajiyev, the foreign policy advisor to the Azerbaijani president, the November 10 trilateral agreement established a “political and, to some extent, legal framework” for peacekeeping forces, adding, “As for additional agreements and additional legal mechanisms on the mandate of peacekeepers, the parties have had initial contacts and some discussions are still ongoing” (BBC—Azerbaijani service, September 6).

In response to a media inquiry on September 13, the Armenian Ministry of Foreign Affairs stated that the mandate issue is not being discussed within the trilateral (Armenia-Azerbaijan-Russia) format, and the discussions mentioned by Hikmet Hajiyev were only between Baku and Moscow (Infocom.am, September 13). “The Azerbaijani side is trying to transfer the issue of clarifying the mandate of the Russian peacekeepers in Artsakh [Armenian word for Karabakh] from a trilateral to a bilateral [Russia-Azerbaijan] format,” the ministry said. For Azerbaijan, as the Karabakh region is part of its internationally recognized territories, it makes little logical sense to discuss the mandate of Russian peacekeepers with a third party (Armenia), said Farid Shafiyev, who chairs the Baku-based Center of Analysis of International relations (Author’s interview, September 13).

Members of the Azerbaijani parliament and civil society institutions have been criticizing the “illegal” activities of the Russian peacekeeping mission ever more explicitly. One of the largest sources of outrage is the fact that the size of the peacekeeping contingent is larger than what was agreed in the November deal. Elman Mammadov, an Azerbaijani lawmaker representing the Khojaly region, presently under the control of peacekeepers, noted the trilateral ceasefire deal had set the number of peacekeepers at 1,960, but reports suggest it has grown to 7,000–8,000, including non-military personnel. “The truth is that the Russian military contingent on our territory supports and cooperates with the separatist regime established in those territories in September 1991 and allows the remnants of certain Armenian military units to remain in Azerbaijan,” he said (Sozcu.az, September 10). These tensions will continue to smolder unless addressed at the highest level.