Exactly one year after the start of the war between Azerbaijan and Armenia for the control of the contested Nagorno-Karabakh region, Azerbaijani President Ilham Aliyev granted an exclusive interview to FRANCE 24 from the capital Baku. 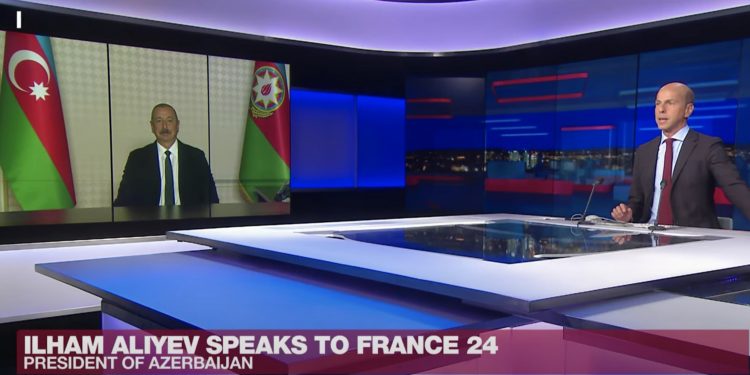 Aliyev said Azerbaijan was ready to “work on a future peace agreement” with Armenia, but warned that any move by Yerevan to reclaim territory lost in last year’s war would be met with a fierce response by his country.

The president of Azerbaijan told FRANCE 24 that the first meeting between the foreign ministers of Azerbaijan and Armenia last week in New York was a “good indicator” that dialogue could be restarted and a peaceful solution sought. He said he was ready to enter peace negotiations but lamented that Armenia’s leadership had so far failed to respond “adequately”. Aliyev added that if the OCSE Minsk Group of mediators (France, the US and Russia) set up a meeting with Armenian PM Nikol Pashinyan, he would have no objections.

However, he issued a warning to Armenia, stressing that any intention to reclaim territory lost in last year’s war for Nagorno-Karabakh would be met with a fierce response by his country. He claimed the conflict between the two countries had been “resolved” once and for all and there should be no return to the previous situation. Aliyev also denied that he had any additional territorial claims on Armenia.

The Azerbaijani president insisted that the issue of granting some kind of autonomy to the Nagorno-Karabakh region, which he had offered for years, was now “off the table” and that both Armenia and the OCSE Minsk Group of mediators should accept this new reality.

Aliyev rejected claims by Human Rights Watch that his country was holding and torturing Armenian prisoners of war, saying they had all been freed. The president also strongly denied that he had sent operatives to attack Mahammad Mirzali, a Azerbaijani blogger who is a refugee in France and who was badly injured in a stabbing in March.