Azerbaijan’s serious crimes court says those sentenced will be deported after serving their prison terms. 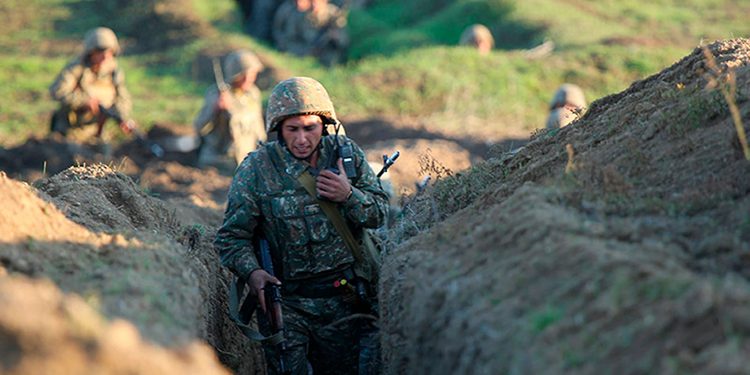 An Azerbaijan court has sentenced 13 members of Armenia’s armed forces to six years in prison, finding them guilty of illegally crossing the border, weapons possession and terrorism offences.

Armenia had no immediate reaction to the sentencing, which was delivered late on Thursday.

Azerbaijan and Armenia fought a six-week war last year in which Azeri troops drove ethnic Armenian forces out of swathes of territory they had long controlled in and around the Nagorno-Karabakh enclave.

Although the war ended in a ceasefire, Azerbaijan detained more than 60 members of the Armenian military in December, accusing them of illegally entering Azeri territory. Some of them were later freed.

The 13 men sentenced this week will be deported after serving their prison terms, according to the decision from Azerbaijan’s serious crimes court.

The fighting in Nagorno-Karabakh, which is internationally recognised as part of Azerbaijan, ended in a ceasefire brokered by Russia, but clashes on the border have persisted at irregular intervals this year, occasionally causing fatalities.

Azerbaijan on Friday said an Armenian sniper had killed one of its soldiers at the border between the two countries and that its army was taking response measures.

Azerbaijan’s defence ministry said in a statement the incident took place at the part of the border formed by its Kalbajar district, part of territory reclaimed by Azerbaijan last November.

There was no immediate comment from Armenia on the reported incident.

Tensions between Armenia and Azerbaijan, two former Soviet republics, are watched closely abroad for any threat to Azeri gas and oil pipelines and the risk of regional powers Turkey and Russia being dragged into conflict.