Azerbaijan strives to be a regional renewable energy hub

Azerbaijan intends to contribute to Europe’s energy security by developing into a regional “green” energy hub, the government officially announced on May 9, at The World Utilities Congress, in Abu Dhabi, United Arab Emirates. 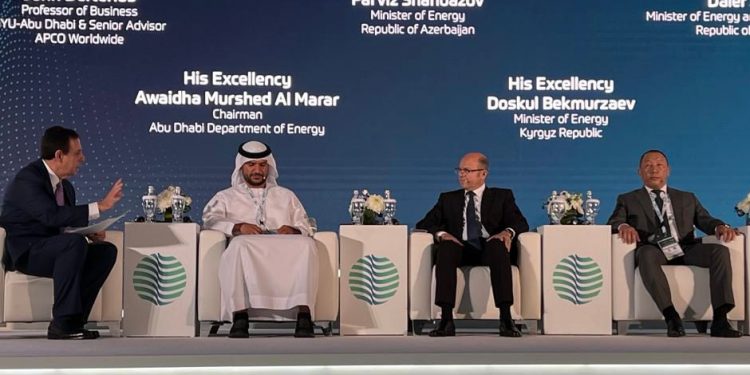 In line with such goals, several days earlier, Azerbaijani and Romanian officials discussed prospects for exporting electricity to Romania generated by offshore wind turbines in the Caspian Sea. The electricity will be transmitted from the Georgian coast via submarine cables stretching across the Black Sea (Minenergy.gov.az, May 5). Previous bilateral talks with the French government revealed that Baku sees the potential to produce up to 7.2 gigawatts of wind energy in the Caspian through 2036 (Minenergy.gov.az, April 4). Furthermore, Azerbaijan is courting European companies to cooperate on the export of renewable energy and “green” hydrogen (that is, produced using offshore wind power) to Europe. And according to Azerbaijani Energy Minister Parviz Shahbazov, the expansion of the Trans-Adriatic Pipeline (TAP) project (the westernmost link of the Southern Gas Corridor, which carries Azerbaijani natural gas to the Balkans and Italy) should additionally enable 10 percent of the pipeline’s capacity to be devoted to transporting hydrogen (Minenergy.gov.az, April 2; APA, March 29).

Currently, Azerbaijan is focusing on developing domestic renewable energy sources, in particular in the form of large-scale solar and wind power. The country aims to increase the share of renewable energy sources in its installed electricity production capacity from 16.5 to 30 percent by 2030 (Minenergy.gov.az, March 29). The considerations driving Azerbaijan’s green energy strategy are not only to boost the country’s energy export potential but also to save more natural gas for internal purposes (Azerbaijan-news.az, March 18).

While Azerbaijan’s large oil and gas resources are well known and already being exported to multiple international markets, its energy ministry estimates that the country also has rich potential to develop about 27,000 megawatts of renewable energy on land and 157,000 megawatts at sea. And Baku has plans to build two new transmission lines to increase electricity exports to Europe (Minenergy.gov.az, March 29).

A large portion of these efforts involve Azerbaijan’s Karabakh territories, which Baku regained control over following its victory against Armenian forces in the September 27–November 9, 2020, Second Karabakh War. According to the country’s main strategic economic policy document, “Azerbaijan 2030: National Priorities for Socio-Economic Development,” Azerbaijan intends to implement so-called “green growth country” and “green energy space” initiatives before the end of this decade (President.az, February 2, 2021). This will require extensive renewable energy–sector construction. Upon signing the trilateral (Azerbaijan, Armenia, Russia) November 10, 2020, ceasefire agreement, Baku declared 10,000 square kilometers of liberated territory in Karabakh to be a “green energy” zone (President.az, November 10, 2020). Several new hydropower plants have already been built and are operating in these areas. And now, concrete plans are being implemented to establish solar and wind power plants there as well (Azertag.az, May 14, 2022).

Azerbaijan’s goals to become a regional leader in green energy production are being supported by various international organizations, such as the International Finance Corporation (IFC), the European Bank for Reconstruction and Development (EBRD) as well as the United Nations Development Program (UNDP) (Azertag.az, October 20, 2020; Trend, April 19, 2022). In addition, multinational corporations from Japan (such as TEPSCO), the United Kingdom (BP) and various European Union member countries have been invited to help implement multiple large-scale green energy projects in Azerbaijan (Report.az, February 15; Azerbaijan-news.az, March 17; Minenergy.gov.az, March 29). Interest has also come from the Gulf states. Recently, ACWA Power of the Kingdom of Saudi Arabia and Masdar of the United Arab Emirates signed on to several renewable energy (solar and wind) mega-projects in Azerbaijan, including the $10 billion, 240-megawatt Khizi-Absheron Wind Power Plant (Azertag.az, January 15, 2022; Nk.gov.az, January 9, 2020). And notably, four memorandums of understanding (MOU) signed with Masdar specifically covered cooperation in the export of Azerbaijani electricity and hydrogen produced from renewable sources (Minenergy.gov.az, May 11).

Despite its small size and relative distance from European Union territory, Azerbaijan is currently considered one of the most promising gas supply alternatives to Russia for the European continent (see EDM, February 23, May 4). But as the EU endeavors to wean itself off of all imports of Russian hydrocarbons, developing the continent’s renewable energy production base and finding alternative power sources will be increasingly crucial. Azerbaijan’s initiative to become a major exporter of electricity generated from renewable resources, thus, comes at a particularly opportune time—Azerbaijani green energy shipments promise to be an important contributor to European energy security. Therefore, investments made today in expanding the infrastructure of Azerbaijan’s Southern Gas Corridor to Europe are doubly vital since, in the next stage, this same pipeline network can carry green hydrogen needed for the EU to transition away from hydrocarbon energy sources.