Recent incidents of audacious attacks on Azerbaijani embassies in Western and European countries indicate that Dashnaks' activities in this direction continue to this day. 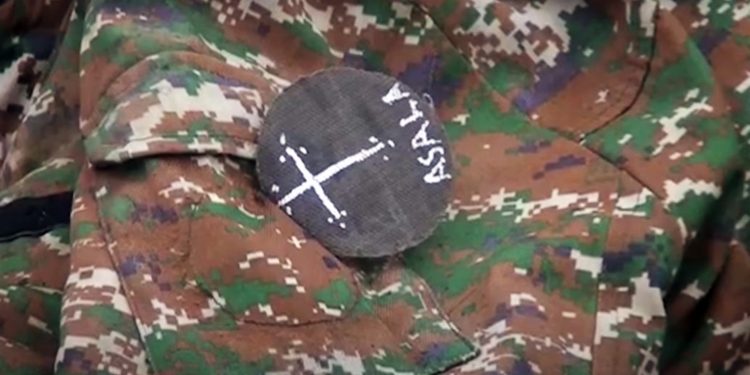 “We have created an atmosphere full of illusions in our brains. We imposed our desires on the minds of others; we lost a sense of reality and let our dreams lead us. As a result, myths created by Armenian organizations have captured the minds and consciousness of almost all Armenians, becoming a justification for them to carry out numerous bloody terrorist acts not only against the Turkish but also against the Azerbaijani people.”

This is, in fact, a confession made by one of the leaders of the radical Armenian party Dashnaktsutyun, the first Prime Minister of Armenia, Hovhannes Kachaznuni, at the congress of the organisation in Bucharest back in 1923.

Since then, virtually nothing has changed in Armenian terrorist ideology or in the actions of terrorist organisations. In the last century, the activities of Armenian terrorists were mainly directed against Turkish politicians, diplomats, and citizens of states having friendly relations with Türkiye. However, after the Second Karabakh war, the representatives of the diplomatic corps of Azerbaijan became the target of Armenian nationalists.

Thus, on the night of October 10-11, the official car of the Embassy of the Republic of Azerbaijan in Washington was shelled. Our diplomatic mission promptly informed the relevant US agencies about the incident. However, as the experience of the past years’ shows, there is little hope for a thorough investigation and fair assessment of the incident.

The Azerbaijani Foreign Ministry has strongly condemned the criminal actions of radical forces in foreign countries against Azerbaijani diplomatic missions, diplomats, and their property, clearly based on hatred and ethnic strife, and demanded that those responsible for the prevention of such provocations carry out their duties more carefully and thoroughly.

“The systematic nature of recent attacks on Azerbaijani diplomatic missions abroad by radical members of Armenian communities, including attacks and vandalism against our embassies in Washington, Paris, Beirut, and other cities is of serious concern. Ensuring the security of our diplomatic missions abroad is an obligation of the host country as approved by the International Convention. In this regard, we reiterate the need to conduct appropriate investigations into each incident that occurred and ensure the safety of our embassies, as well as our diplomats at the necessary level,” the Azerbaijani Foreign Ministry said.

To be fair, it should be noted that, for example, in Paris and Beirut some of the participants in the attacks were found and detained, but they were all released soon afterward. As to the last incident in Washington, the perpetrators have not been identified yet, although there are no doubts that the firing of a car at the Embassy of Azerbaijan is the work of Armenian radicals. It has been known worldwide since the beginning of the last century that terrorist attacks on diplomats are a favourite method of Armenian terrorists. Ambassadors and diplomats are the main targets of their attacks.

The list of Armenian terrorist organisations and their bloody acts in various countries is endless.

Established as early as 1885, the Armenakan party has staged armed clashes and terrorist acts in various cities and regions of Türkiye (Van, Mush, Bitlis, Trabzon, and Istanbul). The party also collaborated with Armenians living in Iran and Russia.

In 1887, the establishment of a new party “Khnchak” was announced in Geneva. Its main objective was to create a “Greater Armenia”. Point 4 of its programme openly stated that agitation, terror, and destructive organisations were to be used for this purpose. 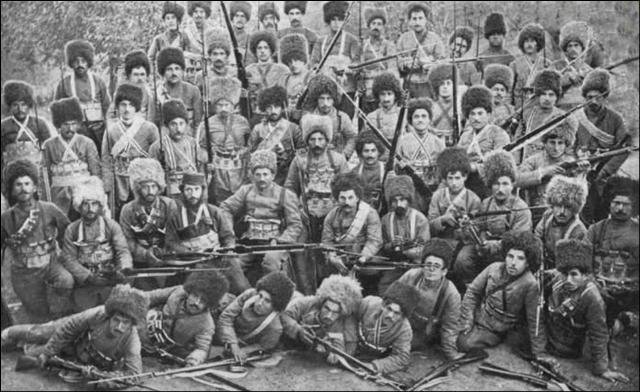 Then, in 1890, the largest terrorist group, the Armenian federal revolutionary party Dashnaktsutyun, was organised in Tiflis. Naturally, it also set out to create a “Greater Armenia” state on the lands of Azerbaijan – in Karabakh and Nakhchivan, as well as in Türkiye.

After the fall of the Azerbaijan Democratic Republic (ADR), assassinations of Turkish and Azerbaijani political and public figures became a priority for Armenian terrorists from the Dashnaktsutyun. To this end, in 1919, the 9th congress of this radical nationalist and fascist party in Yerevan decided to launch actions of “Nemesis” (“Vengeance”), a special terrorist organization. Nemesis” lists contained names of 650 prominent political and state figures of Turkey and Azerbaijan and just in several months of 1920, prominent figures of ADR such as Fatali Khan Khoisky, Khalil bey Khasmammadov, Nasib bey Yusifbeyli and Hasan bey Aghayev became victims of Armenian terrorists.

Today, there are several terrorist groups created by the Dashnaksutyun party: “Armenian Genocide Avengers,” who assassinated Turkish diplomats in Austria, Denmark, and Portugal in the 1980-82s; the secret terrorist group DRO and its units DRO-8, DRO-88, DRO-888, DRO-8888. In 1972, another group – “Armenian Genocide Justice Commando” – began operating under the cover of Dashnaksutyun. The aim of these “commandos” was to recruit young Lebanese citizens of Armenian origin into military associations and organize bloody terror acts against Turks and Azerbaijanis.

As early as 1975, another radical group headquartered in Damascus, the Armenian Secret Army of Liberation (ASOA), was established in Beirut. Open sources say that the group has over a thousand fighters trained in Palestinian bases. In its first six years of operation, the organisation has carried out terror acts in various countries of the world against 19 Turkish diplomats. In the same year, the Armenian Secret Army for the Liberation of Armenia (ASALA), an equally notorious and one of the most brutal terrorist groups in the world, was established in parallel. ASALA undertakes terrorist acts and continues to do so mainly against citizens of Azerbaijan and Türkiye. One of the key figures in the ASALA can be considered Akop Hakobyan, who claimed responsibility for the assassination of the Turkish ambassador to Athens in 1980. In an interview with the American edition of The New York Times, Hakobyan openly declared: “Our enemies are the Turkic regime, NATO, and the Armenians who do not cooperate with us.” In a statement released in Beirut in 1993, ASALA spoke of opposition to the implementation of the Baku-Tbilisi-Ceyhan oil pipeline project.

In 2001, the ASALA established the Gegharon group, whose task was to assassinate political leaders, diplomats, and businessmen of exclusively Turkic origin in Central Asia and the South Caucasus. Another component of ASALA is the “Armenian Liberation Front”, which emerged in 1979 and aims at training terrorists against Türkiye and Azerbaijan. 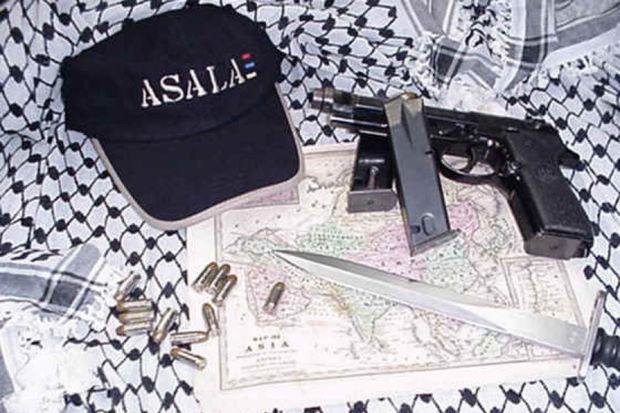 It should be noted that the “Armenian Association”, created in Moscow in 1988, also has close ties with the ASALA. The group was engaged in providing fighters with false documents for terrorist activities in post-Soviet space and actively participated in the transportation of weapons and mercenaries to Karabakh.

We can also recall the “Armenian Liberation Movement” (ALM), which emerged in France in 1991. It was preceded 10 years earlier by the Orly Group, which was made up of Armenian youth living in France. This “youth” has carried out more than 10 attacks in various airports around the world in 7 years of activity.

The “Democratic Front”, which operates in the USA, Canada, and Western Europe, can be considered an equally radical grouping. Its main objective is to dismember the Turkish state.

In 2001, the Apostle group was formed of Armenian, Syrian, and Lebanese citizens, and it is also intended to carry out terrorist attacks in Türkiye and Azerbaijan.

Recent incidents of audacious attacks on Azerbaijani embassies in Western and European countries indicate that Dashnaks’ activities in this direction continue to this day. And for various reasons, naturally dictated by their own interests, the civilised “collective West” has always preferred to keep quiet about Armenian terror. This ambivalent approach to different countries of the South Caucasus has allowed Armenian terrorism to spread to vast geographies. And it is not only European countries that have an inadequate approach to the bloody terrorist attacks by the Armenian thugs. The leadership of the Armenian SSR and their patrons in Moscow also did their best to thoroughly conceal the Armenian trace in the brutal terrorist attacks. For example, after the January 1977 explosion in the Moscow metro, not a single line was written about the perpetrators (Akop Stepanyan, Zaven Bagdarasyan, and Stepan Zatikyan).

Much has been said and written about official Yerevan’s patronage of terrorists and fascists at the state level, and there is no point in repeating it. However, it is worth mentioning that after Armenia gained independence, the official circles of the country made the rehabilitation of terrorist organisation activists a priority for themselves. For example, the famous Armenian terrorist Monte Melkonyan, who was released from a French prison in 1990, came to Armenia and continued his terrorist activities in the territory of Karabakh. Moreover, Melkonyan was declared an Armenian national hero, and one of the subversive centres of the Ministry of Defence was named after him. And in regard to Varuzhan Karapetyan, who was sentenced to life imprisonment for the terrorist attack at the Paris Orly airport in July 1983, killing 8 and injuring 60 people, a campaign was conducted in Armenia at the governmental level to collect signatures for his release. In April 2001, the terrorist was indeed freed by the French court and found asylum in Armenia.

Armenian terrorists, wreaking havoc and shedding blood, have operated and continue to operate around the world – in the US, Britain, France, Italy, Austria, the Vatican, Spain, Belgium, Greece, Switzerland, the Netherlands, Australia, Canada, Portugal, Lebanon, and Iran. The myths about the “long-suffering nature of the Armenian people” and the need to “revive a great Armenia” have served and still serve as justification for their brutal terrorist acts.

And with all the multiplicity and diversity of Armenian terrorist groups, each of them has its own specific tasks which they carry out one way or another. And while the “revival of Greater Armenia” is not very successful, bloody crimes against politicians and diplomats of countries that displease Yerevan, mainly, of course, Türkiye and Azerbaijan, are undertaken regularly.

And for now, we can only hope that the attacks carried out by Armenian terrorist organizations on peaceful demonstrations of Azerbaijani youth around the world after the 44-day war will show the world community that if the bandits’ claims are not accepted and supported, the Armenian radicals will direct their anger against the world community itself.