Eight men have been arrested after a gang of protesters stormed the Azerbaijani embassy in London. 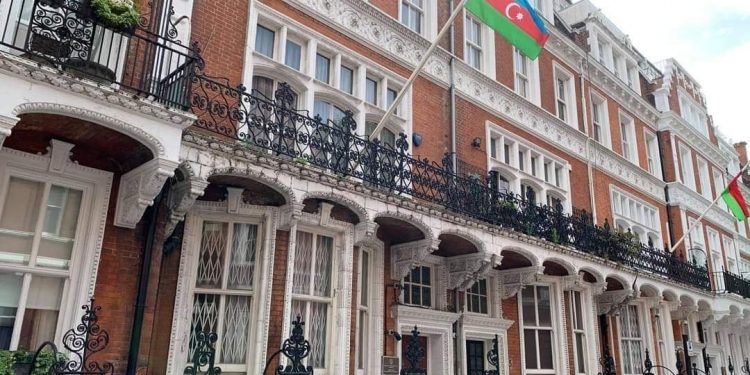 Footage on social media showed men waving flags from the balcony of the country’s base in Kensington, Metro.co.uk reports.

Slogans in Arabic have been daubed on the wall and the Azerbaijani flag was taken down.

It’s unclear what sparked the protest but it was led by a group called The Mahdi Servants Union.

It is a Shia Muslim organisation based in London which says it wants to establish ‘civilisational dominance’ on its website.

Its leader Yasser Al-Habib is a controversial cleric whose film The Lady Of Heaven had to be pulled from UK cinemas earlier this year after protests from some Sunni Muslims offended by its interpretation of Islamic history.

Members linked to the group have cited ‘persecution’ by the Azerbaijani government of some Shia Muslims in the country.

In a statement, the group said it had been directed by their leader ‘to take urgent action’ against Azerbaijan president Ilham Aliyev.

Al-Habib, who was granted asylum in the UK after coming into conflict with the authorities in his native Kuwait, runs a mosque in Buckinghamshire.

The vast majority of Azerbaijanis are Shia Muslims but the country is largely secular.

Iran’s embassy in London previously accused the group of attack on its property in 2018.

A Met spokesperson said officers were sent to the building after receiving ‘reports of protestors who had entered the premises’ at around 4.30pm.

They added: ‘Officers attended and engaged with those present.

‘Eight men were arrested on suspicion of trespass and criminal damage. They were taken into custody where they remain.

‘No injuries were reported. Enquiries are ongoing.‘