Though usually quite cautious in his foreign policy initiatives, President Aliyev visited Kyiv amidst Russia’s mounting military-political pressure campaign against Ukraine as well as the worsening Western-Russian confrontation within the Ukrainian context. 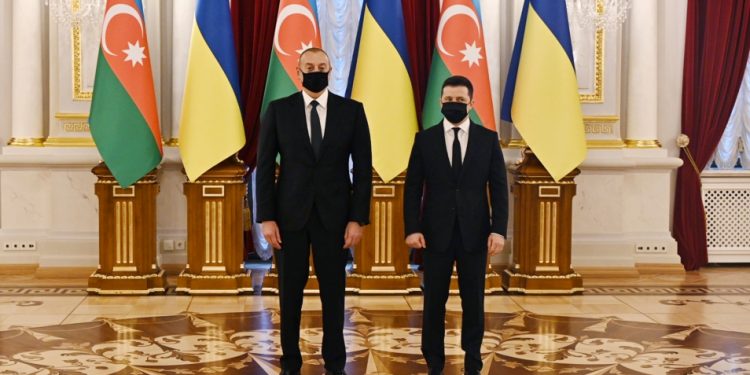 In mid-December 2021, Azerbaijani President Ilham Aliyev received an invitation from his Ukrainian counterpart, Volodymyr Zelenskyy (Trend.az, December 15, 2021), and within a month, he was paying a working visit to Kyiv amidst the security crisis around Ukraine and a large-scale cyberattack on Ukrainian government websites (President.gov.ua, January 14, 2022).

The January 14 working visit proceeded with both leaders meeting and signing several inter-governmental agreements on cooperation in food security, trade, agriculture, energy and land management (President.az, January 14, 2022). Yet perhaps the most significant outcome of the summit was the release of the “Joint Declaration of the Presidents of Azerbaijan and Ukraine,” which underscores “mutual support for the sovereignty and territorial integrity of the two states within their internationally recognized borders” and a “readiness to intensify cooperation in fighting hybrid threats and further strengthening cooperation in the field of defense industry by completing current and developing new joint projects” (President.gov.ua, January 14; see EDM, January 25).

Despite somewhat divergent foreign policy orientations—Ukraine has Euro-Atlantic aspirations, while Azerbaijan mostly pursues a balanced approach to navigating great power rivalry internationally and in its neighborhood—both countries maintain high-level relations. And since 2014, Baku and Kyiv have shared concerns regarding Moscow’s increasing assertiveness in the post-Soviet space as well as Russia’s backing of local separatist movements. Notably, Azerbaijan never accepted Crimea’s seizure by Russia in early 2014. This was in contrast to Armenia, whose then-president Serzh Sargsian rushed to become the first foreign leader to congratulate Vladimir Putin on the annexation. Moreover, Baku has supported all pro-Ukraine resolutions at the United Nations General Assembly.

Illustrative of this important relationship, Ukraine’s latest National Security Strategy, adopted on September 14, 2020 (a couple of weeks prior to the outbreak of the Second Karabakh War), names Azerbaijan a strategic partner, together with Turkey, Georgia, Lithuania and Poland (Pism.pl, October 30, 2020). For his part, President Aliyev, too, described Ukraine as Azerbaijan’s strategic partner in a phone call with Zelenskyy on September 22 of that year (President.az, September 22, 2020).

During and following the 2020 Karabakh war, Ukrainian officials, most notably the ambassador to Baku and several members of the Verkhovna Rada (parliament), confirmed their country’s utmost support for the principle of territorial integrity and congratulated Azerbaijan on its victory in the conflict (Twitter.com/ukrinaze, September 30, 2020; Twitter.com/v_kanevskyi, November 8, 2021; Oxu.az, November 8, 2021). As some observers claimed at the time, Azerbaijan’s triumph might have inspired Kyiv to look for lessons from the Second Karabakh War for dealing with its own breakaway territories (Atlanticcouncil.org, November 17, 2020; see EDM, November 9, 2020). This argument was partly reinforced by Ukraine’s purchase of additional Turkish-made Bayraktar unmanned combat aerial vehicles (UCAV), which, according to many experts, proved to be game-changers in Karabakh and, eventually, in Donbas (Warsawinstitute.org, October 27, 2021; see EDM, June 23, 2021 and November 10, 2021). Some observers have even suggested Aliyev’s recent visit to Kyiv could be part of a crystallization of a broader Azerbaijani-Turkish-Ukrainian trilateral alliance, (Top-Center, March 18, 2021; Jam News, January 15, 2022), given the fact that all three pairs within this triangle already nurture high-level relations, including military ties.

The aforementioned January 14 Joint Declaration by Aliyev and Zelenskyy also mentions the long-forgotten GUAM—a quadrilateral discussion platform consisting of Georgia, Ukraine, Azerbaijan and Moldova. Formed toward the end of the 20th century and diplomatically supported by the United States, GUAM had “a long-term goal of integrating [its members] into the Euro-Atlantic organizations and counterbalancing the Russian dominance in the Black Sea region” (Eurasian-research.org, accessed February 9, 2022). Yet the format faded away over the years and, more recently, was essentially replaced by the so-called Association Trio (GUAM minus Azerbaijan). Nonetheless, because of its inherent economic and trans-regional connectivity potential, GUAM could again gain geopolitical weight were it to receive strong backing from other global and regional powers, such as the US, European Union, Turkey or Poland (Top-Center, May 31, 2021 and July 14, 2021).

Though usually quite cautious in his foreign policy initiatives, President Aliyev visited Kyiv amidst Russia’s mounting military-political pressure campaign against Ukraine as well as the worsening Western-Russian confrontation within the Ukrainian context. The timing of the visit was also remarkable for the fact that it coincided with political turmoil in Kazakhstan and an armed “peacekeeping” intervention by the Moscow-led Collective Security Treaty Organization (CSTO). Notably, Azerbaijan’s main rival, Armenia, not only joined but formally steered (as rotating head of the alliance) the multinational (though Russian-led) CSTO mission (TRT World, January 13; EurasiaNet, January 7). Thus, paradoxically, Armenia, a country that was invited to the Summit for Democracy chaired by US President Joseph Biden in early December (Armenian Weekly, November 23, 2021), contributed just a month later to Russia’s neo-imperial effort to prop up an illiberal regime in its neighborhood. Meanwhile, Azerbaijan, much criticized by the West, inter alia for restoring its territorial integrity by force, is sending clear signals about the role it can play in safeguarding and bolstering regional security—not only by showing solidarity with a threatened Ukraine but also by standing in as an option for decreasing Europe’s natural gas overdependence on Russia (Eeas.europa.eu, January 30, 2022).

That Azerbaijan has agreed to lease an unspecified amount of farmland in Ukraine (Azeri Daily, January 14) is another intriguing piece of news, which may have gone largely unnoticed but could be important for both practical and symbolic reasons. By utilizing fertile Ukrainian land to reduce its dependence on imports of Russian wheat, Azerbaijan is pursuing a strategic food security agenda in the midst of turbulent times. But at the same time, Baku is publicly demonstrating its investment inside Ukraine despite the proverbial Sword of Damocles hanging over Ukraine’s sovereignty and territorial integrity.

In the late 1990s, former US National Security Advisor Zbigniew Brzeziński characterized Azerbaijan and Ukraine as “geopolitical pivots”—key nodes of regional power configuration due to their strategic location astride post–Cold War Europe’s new fault lines (Zbigniew Brzeziński, The Grand Chessboard, 1997). Today’s developments in and around the borders of these countries show that these two states continue to play pivotal roles in regional geopolitics, especially in the context of the deterioration of the post–Cold War European security system. As Brzeziński argued, the future of Azerbaijan and Ukraine will be crucial for defining what Russia might or might not become. However, Western countries will need to more fully appreciate their geostrategic importance for European security while the situation remains fluid.