Azerbaijan’s host site for the Euro 2020 football cup was built for an Olympic Games that never was. Now it’s preparing for the biggest event it’s hosted so far. 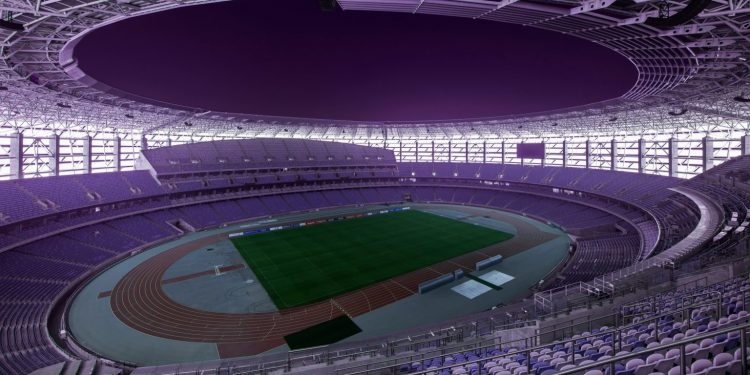 Baku’s 225,000-square-metre Olympic Stadium, which will be one of the host sites for this year’s Euro 2020 football tournament, was built just six years ago, ahead of the 2015 European Games. [Photographer RM / Shutterstock]

When it comes to energy consumption, a stadium’s age and location can make a big difference.

Baku’s 225,000-square-metre Olympic Stadium, which will be one of the host sites for this year’s Euro 2020 football tournament, was built just six years ago, ahead of the 2015 European Games. Its name was meant to give Azerbaijan a leg up in its bid to host the 2020 summer Olympics, though the government is probably quite relieved now that they eventually didn’t win that bid.

Since then the stadium has hosted several large-scale sporting events such as the 4th Islamic Games in 2017 and the UEFA Europa League Final in 2019.

But this year’s Euro 2020 will be the biggest event yet that the stadium has hosted. “Baku Olympic Stadium has never welcomed so many people during one event, where there is less than a week between the match days,” says Javid Garayev, the director of the stadium. “So, for sure this will affect the number of employees, cleaning and waste management operations at the stadium.”

A massively bigger event might ordinarily mean a massively bigger climate impact. But this year will be quite different because of the COVID-19 pandemic. The stadium will be at only 50% capacity, welcoming around 35,000 fans.

“After the stagnation period of the world events during the pandemic, this is a big happiness to see the spectators coming back to the venue to support their favorite teams and watch their favorite game – football not from the TVs but from the tribunes,” says Garayev. “The main complexity of Euro 2020 is to keep the balance between COVID-19 measures and the real fan atmosphere which we aim to create organising four matches at the venue.”

In terms of energy use, having the stadium at 50% capacity won’t make that much difference, Garayev says. “From the perspective of venue operations, we use the whole stadium’s bowl, we are on fully operational mode and all climate and environmental impact is actually regulated by the venue not depending on how many people will attend the event,” he says.

“There can be less impact on behalf of the waste amount,” he adds, “but this reality will not change the overall potential waste amount, because all equipment of the stadium will be working at the maximum capacity during the event period.”

But Garayev says that as a newer stadium in a warmer climate, BOS normally has a lower climate impact than other stadiums of a similar size.

“Every single stadium is a power-hungry beast and depending on new services offered by different venues, for example heated seating, turf heating and so on, the amount of energy consumption can change very fast. For example, stadium lights use a lot of energy, because when it comes to illuminating the pitch, we need to reach all the standards. Additionally we have an advertising screens, media façade, kitchen and catering services which need to heat up the food and keep the drinks cool, etc.”

According to Garayev, all this represents roughly 20% of the stadium’s total energy use. Additionally, the broadcasters who show the game live require powerful satellite transmitters and this number is about 11% of all energy usage, he says.

However, Garayev says BOS officials are doing their best to reduce these numbers, using modern technologies. “Thanks to the climate conditions of our country, we don’t require seats and pitch heating, we can start the inside heating and cooling process later on in the season which we can save energy on this. We also try to use LED lamps which we have on our façade, in our offices and working areas. And in the future, we plan to apply more modern technologies to reduce the usage of the energy.”

“Summarizing all mentioned above, the power usage often depends on the climate area where the stadium is located and also the technologies applied for the operations of the venue. We always try to do our best to minimise the usage of the energy of the stadium, that is why there is most modern equipment at the stadium.”

The stadium’s design included a number of green elements. Before construction started in 2011, Boyukshor Lake next to it was cleaned. Approximately 6-hectares of greenery were put in the surroundings of the stadium, which consists of almost a thousand trees. It also uses KNX and HVAC systems which both can modify and control energy use in the building.

“The KNX system lets us save the usage of the energy at the stadium. If there is not any event or ongoing work in a specific area of the stadium, the lights are turned off automatically which our employees can monitor this process as well. The same process is also available for the HVAC system operations.”

Azerbaijan is working with the the EU-funded Greenfoot program to improve the climate impact of football sites across the country. Jed Cohen, a senior expert and project leader at the Energy Institute who is working on the project, says they are finding innovative ways to involve the public in these projects such as crowd-funding, a model they’re using across Europe.

One of those sites is the 6,500-seat Dalga Arena built in 2011. “Azerbaijan is obviously an interesting case because the crowdfunding market there is not well-developed and also they have a relatively low energy price compared to Europe, so the economics is a bit different,” he says. “Energy efficiency is also less developed in Azerbaijan than in the rest of Europe.”

“So we’re looking to put solar panels on the roof of Dalga because it’s very sunny there, and that will go a long way to developing the renewables market in Azerbaijan. It will also give local people the opportunity to participate.”

Once Euro 2020 is over, the stadium has plans for more energy efficiency improvements. Within two years, all lamps of the stadium will be converted to LED.

“During the construction period we did our best to assure the construction company to be efficient, but also to build a great building as we have now. Because this is very important for us and for the environment and community to keep this efficiency. We have a big water storage which helps us to collect water and reuse it for the second time,” Garayev said.

“It’s not a secret that massive stadiums and arenas across the world have the capability for a massive carbon footprint,” he concedes. “However, those arenas and stadiums including BOS can also lead the way for implementing the environmentally friendly features and practices helping to reduce carbon footprint while also encouraging our visitors to follow the similar practices.”