The implementation of the trilateral agreement brokered by Russia on the night of November 9-10, 2020, between Armenia and Azerbaijan continues in fits and starts. Most near-term questions have been resolved. How intermediate-term issues turn out depend upon the results of the snap parliamentary elections called in June by Armenian Prime Minister Nikol Pashinyan. As for the longer-term outcome, this is more difficult to estimate, and it is path-dependent upon those elections. In this regard, events on the ground—but not only the elections—are still in control, even if these are no longer military events. 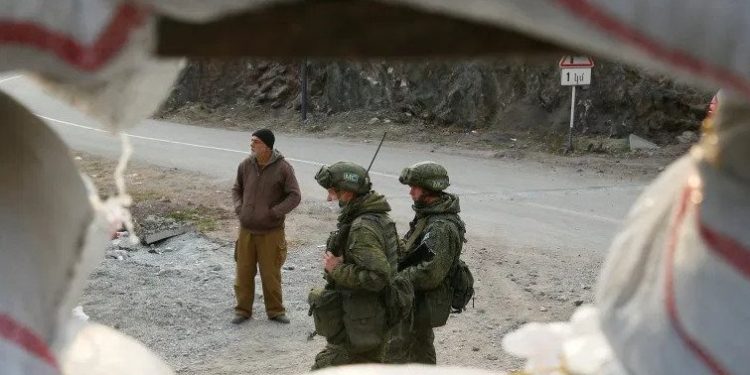 Russian peacekeepers at the Dadivank, an Armenian Apostolic Church monastery, located in a territory which is soon to be turned over to Azerbaijan under a peace deal that followed the fighting over the Nagorno-Karabakh region, in the Kalbajar district, November 15, 2020 [Stringer/Reuters]

BACKGROUND: Many of the provisions for ceasefire have been implemented. Armenian forces have been withdrawn from Agdam, Kelbajar, and Lachin, although Armenia still sends servicemen to Karabakh, as is evident from a recent demonstration against the practice, held in Yerevan by the parents and grandparents of army recruits themselves. The Russian peacekeeping contingent has been deployed as foreseen, and the peacekeeping center to enforce the agreement has been established as intended. Only a few Armenians elsewhere in Azerbaijan are returning to Karabakh, but ethnic Azerbaijanis who are internally displaced persons and refugees cannot get back to areas in Karabakh that are under Russian peacekeeping administration, such as Khojaly. There are some disputes over the implementation of the exchange of prisoners of war, hostages, and other detainees as well as the remains of the dead.

Armenia contends that Azerbaijan still detains about 200 prisoners-of-war (POWs). According to Azerbaijan, these individuals were not captured during the conflict itself but infiltrated the de-occupied territories after the cessation of hostilities as guerrillas and saboteurs. As such, they would not be considered POWs under the international law of war. Moreover, since they were captured after the signature of the November agreement, they could not be covered by it.

There is also a political dispute inside Armenia over the creation of the Zangezur Corridor between Nakhichevan and the main body of Azerbaijan, foreseen in the ceasefire agreement. The ceasefire agreement mandates that existing economic and transport ties should be unblocked. The ceasefire document also mandates the construction of a road from Khankendi across Lachin to the Armenian border, which would not pass under the mountaintop city of Shusha. This would relieve pressure on the existing Lachin Corridor by making it less strategic, although the agreement provides for “the subsequent redeployment of the Russian peacekeeping contingent” to guard the new route.

Former Armenian President Robert Kocharyan has returned to the political arena following his acquittal on charges brought by Pashinyan’s justice ministry. He has vowed to campaign against the implementation of the Zangezur Corridor, a position amounting to renunciation of one of the points of the original November 2020 ceasefire agreement. However, the Armenian railway system is owned by the Russian railway system. Thus, the Russian railroads are at liberty to rehabilitate the old line linking Azerbaijan with Nakhichevan, following Russian state policy, should they wish to do so. This line would in fact be to Russia’s advantage, first because it would provide a direct link with Turkey through Azerbaijan, and second because the Russian FSB’s Border Service would control the transport communication. This would provide Russia with another sensitive strategic point through which it could exert pressure on Azerbaijan (and Armenia).

IMPLICATIONS: The Zangezur Corridor, which Kocharyan opposes, is in Russia’s interest. Indeed, Russia is in the region for no other reason than to seek its own advantage. The Russian military in Azerbaijan is not a peacekeeping force in the true sense of the word: it is primarily concerned with Russia’s national interests in the region, which for the moment coincide with keeping the peace (more or less), albeit in a tenuous state that suggests a need for Russia’s continued presence. The Zangezur Corridor, however, cannot be unblocked without Turkey, so Armenia will need to reconcile with the opening of its Turkish border, now that events on the ground have satisfied Ankara’s condition (i.e., the end of the Armenian occupation of Karabakh) for its opening.

Kocharyan is a personal friend of Putin and is a known quantity in Moscow. But it is not a foregone conclusion that Russia moves to tip the balance in his favor in the snap parliamentary elections that Pashinyan has called for Armenia in June. In fact, he may be a too well-known quantity to Moscow, and not what they exactly prefer at the moment. As a member of the Karabakhi clan that dominated Armenian politics for over two decades up until Pashinyan’s election in 2018, Kocharyan typifies—even personifies—the principal conundrum of the dominant Armenian worldview, which is encouraged by a diaspora that need not suffer its now-evident disastrous consequences. It is entirely possible that Russia supports Kocharyan only just enough so that he significantly reduces Pashinyan’s current majority (or even forces the latter into a minority government), constraining his margin of political maneuver while ensuring that the Zangezur Corridor is opened.

At the same time, Moscow’s relations with Baku are under strain due to the discovery of pieces of an Iskander-M missile in Shusha. The version of the missile that Armenian armed forces received is the Iskander-E, which is the export version. The “M” version of this missile has a longer range and is reserved for use by Russian forces. This means that they were either launched by Russian forces from the Russian military base in Armenia at Gyumri, roughly 60 miles north-northwest of Yerevan and 160 miles northwest of Shusha, or that Russia sold or delivered the “M” version to Armenia.

CONCLUSIONS: The greatest long-term dangers to the peace process in Karabakh are the evolution of domestic Armenian politics, as described above, and the question of Russian policy. For example, there are unconfirmed reports that Moscow is giving or considering giving Russian passports to ethnic Armenians in Karabakh. It has used this tactic in the past in Transnistria, Abkhazia, and most notably South Ossetia. Azerbaijan’s Constitution provides that any citizen of Azerbaijan accepting a foreign citizenship loses Azerbaijani citizenship. Technically, under international law, a passport is only a travel document and not necessarily a proof of citizenship, unless the issuing country’s domestic law so provides; but in the case of Karabakh this may be a distinction without a difference. However, the distance from Khankendi to the nearest Russian border with Azerbaijan is about 75 miles, there is no direct route, and Azerbaijan’s second-largest city Ganja is on the way. Even if the attachment of Karabakh to Russia is unlikely, still one of the dangers of the present situation is a creeping “political Ossetianization” of that remaining part of Karabakh where the Russian troops are located (aside from the Lachin corridor).

Finally, a topic not directly covered in the ceasefire agreement—the rehabilitation of the formerly occupied territories—will assume a higher profile as time goes on. The Armenian side’s refusal to turn over minefield maps to the Azerbaijani side (an obligation under customary international humanitarian law) complicates the resettlement of internally displaced persons and refugees. This situation will increasingly be put into parallel with the ecological and environmental destruction wrought by 30 years of Armenian occupation, highlighted by the international media during the settlers’ evacuation of the seven administrative districts surrounding the old Nagorno-Karabakh territory. This poses significant difficulties not only for the resettlement of the original population but also for the very rehabilitation of the territories. Surveys carried out by European institutions even during the Armenian occupation noted these violations of the law of war. The international community will increasingly come to recognize the need to address such issues, just as in any post-conflict situation.

Robert M. Cutler is a Fellow of the Canadian Global Affairs Institute.