On Thursday, 31 March 2022, Minister Zbigniew Rau, acting in his capacity as the Chairman-in-Office of the Organization for Security and Co-operation in Europe, paid an official visit to Azerbaijan. 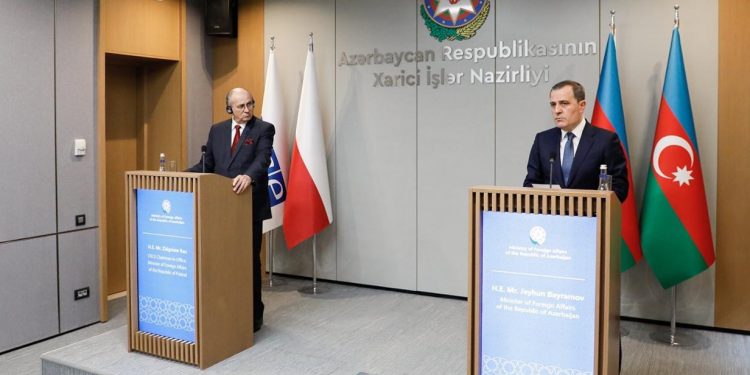 While in the country’s capital, Minister Rau met with President Ilham Aliyev and Minister of Foreign Affairs Jeyhun Bayramov. The talks focused on the OSCE’s support for mediation efforts and finding a lasting and peaceful solution to contentious issues in Azerbaijan-Armenia relations. “The OSCE remains a platform seeking solutions to crisis and conflict situations in the Organisation’s region, and can assist in the peace process between Yerevan and Baku,” said the head of Polish diplomacy. “We hope to make headway, particularly in urgent humanitarian issues, such as the release of prisoners of war, exchange of information about missing persons, demining, and protection of historical and cultural sites,” he added.

The head of the Polish MFA underscored that the Organization for Security and Co-operation in Europe is well aware that Azerbaijan gives priority to the problem of missing persons. He also expressed his regret about the fatalities caused by landmines. “During this visit I intend to draw attention to the situation of conflict-affected persons,” stressed the top Polish diplomat. Minister Rau noted the impact Russia’s aggression against Ukraine has exerted on the security situation in the region. He emphasised that the war has implications for the entire OSCE region, including the South Caucasus, and that it also affects the priorities and agenda of Poland’s chairmanship of the OSCE and the way the organisation operates. The head of the Polish MFA also stressed the role Ambassador Andrzej Kasprzyk, Personal Representative of the OSCE Chairman-in-Office, has played in the peace process in the region. “His work can bring added value by promoting transparency, building trust, and facilitating humanitarian aid and other post-conflict measures,” he noted.

Azerbaijan was the second stop on Minister Rau’s tour of the South Caucasus. Yesterday, the OSCE Chairman-in-Office visited Georgia. He will next travel to Armenia. For more information on Poland’s chairmanship of the Organization for Security and Co-operation in Europe in 2022, go to the OSCE website at: https://www.osce.org/chairmanship.