Clearing the South Caucasus of landmines must remain a priority

A few days ago I chaired a meeting in Tbilisi ahead of the launch of this year’s campaign “Landmine Free South Caucasus”. Representatives of demining organisations and others gave a sobering picture of the remaining problem of landmines and other unexploded remnants of war in the region. 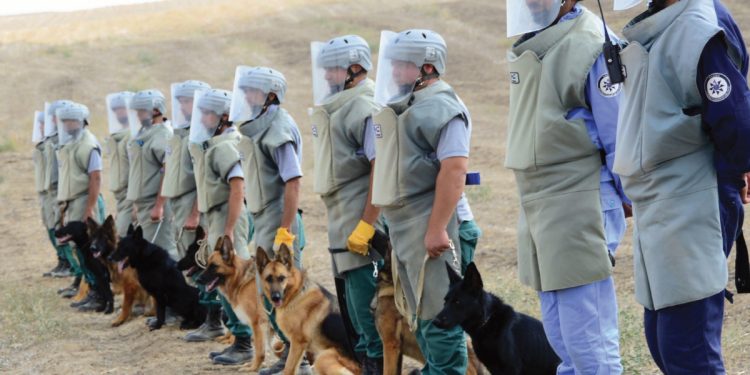 In the first Armenian-Azerbaijani war, a buffer zone of newly 'cleansed' ghost towns was filled with land mines. In the recent war, these were added to as Armenian forces retreated. It is estimated that it will take more than a decade to clear them © ANAMA

In Soviet times “the Transcaucasus” was a highly militarised border region. Thirty years later the contamination from this period remains on large swathes of land. But since the collapse of the USSR in 1991 the region has also seen extensive conflict which has left hardly no area untouched. Hundreds of thousands of landmines are yet to  be cleared. Explosive remnants of war – including from the recent 44 day war between Armenia and Azerbaijan – continue to threaten life and to disrupt economic activity.

From the outset one has to recognise the huge work that has already been done, and is being done presently, to clear the region of landmines and other unexploded ordnance. Organisations like ANAMA (Azerbaijan), CHDE (Armenia) and DELTA (Georgia), as well as international organisations such as The HALO Trust, have put in a huge amount of work and effort. Many of their workers have died or were have been injured in the process.

These days not a week passes without the news of some tragic event involving landmines or unexploded ordnance. The sheer suffering for the individuals involved, their friends and family and their community is huge. Equally the economic cost, especially for the already vulnerable border communities is enormous, both in monetary terms, as well as in the way it impacts daily life.

That this situation should not be acceptable to anyone is clear. But there are several problems that continue to make the challenge of eradicating this scourge long and difficult. First, societies in the three countries are not as aware of these problems as they should be. Communities suffering from the problem of landmines tend to be border communities far away from the capital cities. Their voice is often not heard. Second, the support of the international community to help the South Caucasus countries eradicate the problem is patchy. Resources are not enough, intervention is often not timely, and there is general lack of co-ordination. Without international support the problem of landmines and unexploded ordnance will be in the South Caucasus for decades.

On top of this a third problem has emerged: the issue has become increasingly instrumentalised for short term political gain, with dangerous consequences

Some in Armenia now see the landmine issue as an “Azerbaijani problem”, and accuse anyone who speaks about landmines of spreading Azerbaijani propaganda, as if Armenia does not have a landmine problem of its own. One can also see the folly of this argument given that the US congress just  approved a grant of 2 million USD to support the work that The HALO Trust are doing to clean the Armenian-inhabited parts of Nagorno Karabakh from landmines and other ordnance of war. As I was writing this commentary news came in of another landmine victim, a 32 year old Armenian farmer in the village of Karmir. So saying that the landmine problem in the South Caucasus is an Azerbaijani problem is simply a  not true.

In Azerbaijan on the other hand it has become fashionable to depict Armenia as the sole culprit responsible for the landmine problem in the South Caucasus, as if Azerbaijan in the past had not laid landmines, or that in the 44 day war Azerbaijani bombing and shelling had not left a legacy of unexploded remnants. To say so is also not true.

These distortions of the problem hinder solutions.

The way forward is through recognising the problem for what it is, namely a region-wide problem which requires a region wide-approach to be resolved fully and completely.

First, there needs to be a higher awareness on the part of civil society of the issues involved and a readiness to work to keep it high on the agenda, in a way that would lead to its solution. Regional information campaigns under the banner Landmine Free South Caucasus were successfully held in 2019 and in 2021, and went some way to start doing this. The regional nature of the campaigns – the same message across the three countries and using multiple local and international languages – has been innovative. This year the campaign – which will run for seven months until June 2023 – will launch with a “Day of Solidarity with the victims of landmines and other explosive remnants of war”, to be marked on 30 November.

Secondly, amongst policy-makers and decision-takers there needs to be a higher awareness of the provisions of the Ottawa Convention that bans the production and use of anti-personnel landmines. Out of 193 members of the United Nations only thirty-three have not signed and ratified the convention. Amongst them are the three South Caucasus countries. The reasons for not doing so keep getting weaker and weaker. Better understanding the convention will help tip the balance in favour of adopting the convention, as 160 countries have already done.

Finally, the international community needs to be more generous and more imaginative. Some funding for demining has been provided, and the result, particularly in Georgia, has been very positive. But the problem is huge and much more is required. The money needs to be properly targeted and spent. But one factor that has been missing in the international effort is ambition and imagination. The players in the region who, given the current political realities, have the capacity to lead, are the UN and the EU. They need to show imagination in how to approach the issues, and to provide leadership. They also need to approach the problem through a regional perspective to ensure that with every step everyone wins.

Making the South Caucasus free from landmines and other explosive remnants of war must remain a priority. 2023 should be a turning point in the efforts in this direction.

Dr Dennis Sammut is Managing Editor of commonspace.eu and Director of LINKS Europe based in The Hague.