The recent visit of Azerbaijani President Ilham Aliyev to Uzbekistan marks a new stage in relations between Uzbekistan and Azerbaijan. The two countries signed a declaration on deepening the strategic partnership between them in many fields. 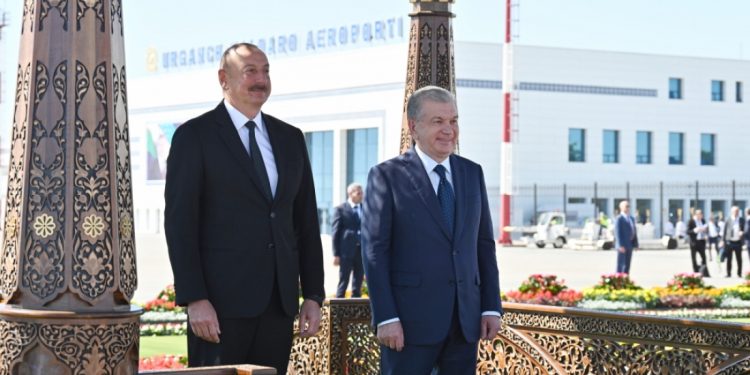 The documents cover cooperation in the industrial, transport and military sectors. Despite the ongoing Russian-Ukrainian war and its negative effects on the post-Soviet countries, cooperation between the two countries in various fields creates opportunities in both economic and security fields.

In terms of economic opportunities, new agreements can promote trade, investment and cooperation in the logistics sector. First, the trade turnover between Azerbaijan and Uzbekistan was $111.9 million in 2021. Trade turnover reached $65 million in the last five months. During the President’s visit, documents worth more than $500 million were signed among business circles. In addition, 19 agreements worth more than $54 million were signed between Azerbaijani and Uzbek businesswomen.

Furthermore, there is huge potential for mutual investment. In comparison with other Central Asian countries, the Uzbekistan industry is relatively diversified and in recent years both economic and political reforms helped to improve the country’s business environment.  Through  investment  in the manufacturing sector in Uzbekistan, Azerbaijan can improve its economic footprint , improve its industrial experience and develop and diversify its non-oil economic sector, all of which also fit into Azerbaijan 2030  Strategy.

In addition, Uzbekistan can invest in the Karabakh region. It can benefit to the beneficial use of the natural resources of the liberated areas through investment.

Finally, the two countries are establishing a joint fund to finance  projects in the field of construction, oil, gas, petrochemical and agro-based industries that can accelerate their industrialization and help them diversify their economies.

In logistics and transport sector has also huge potential for cooperation. Due to the Ukraine war, most companies do not prefer to Russian route and appreciate alternative route which goes through Central Asia and South Caucasus, such as Middle Corridor. In the era of the unstable situation of the Russian route, both Uzbekistan and Azerbaijan play a key role between China and the EU for railway trade. The recent decision to construct the China-Kyrgyzstan-Uzbekistan (CKU) railway may increase both Uzbekistan and Azerbaijan’s strategic importance to China and the EU.  The new route will be one of the shortest routes to send cargo to both Europe and China, as it will shorten the freight journey by 900 km and save seven or eight days in shipping time. By   cooperation in the transport sector, and by simplifying regional trade procedures, both countries can strengthen their position as transit countries and enjoy transit fees. Uzbekistan’s Orient Logistics’ intention to use Azerbaijan’s ports for transmodal transportation shows that companies have the motivation to develop cooperation in the transport sector.

Developing relations alongside the economy also create a host of opportunities for the security of the two countries. First, although both countries have alliance agreements with Russia, they follow a balanced and multi-vector foreign policy. At a time when Russia’s aggressive foreign policy is on the rise, the deepening strategic partnership gives both countries the chance to increase their maneuvering capabilities and diversify their alternatives.

Secondly, due to the destabilization of the Russian route, China and the EU are increasingly dependent on the countries of Central Asia and the South Caucasus to maintain their rail trade. Growing cooperation between Baku and Tashkent in the transport sector helps them strengthen their strategic position through Eurasian trade and reduce external threats against them.

Finally, the rise in agricultural product prices due to the Russia-Ukraine war  creates an opportunity for the two countries to cooperate in the agricultural sector and ensure food security not only for themselves but also in the regional context. Both countries signed a roadmap for agricultural development

In conclusion, recent developments between Azerbaijan and Uzbekistan create  a range of opportunities in the economic and security fields. In the short term, both of them may increase their trade turnover and mutual investment. In the medium term, both countries have a chance to strengthen their geopolitical and geoeconomic positions between China and the EU, increase their  maneuverability, continue to follow a balanced foreign policy, and reduce external threats in the era of great power politics.

Yunis Sharifli is a Research Assistant at the Middle East Institute. He also works as a Junior Research Fellow at the Caucasian Centre for International Relations and Strategic Studies (QAFSAM) and at the Topchubashov Center in Azerbaijan.