Turkey has welcomed the decision by Baku and Yerevan to start talks for the establishment of permanent peace. 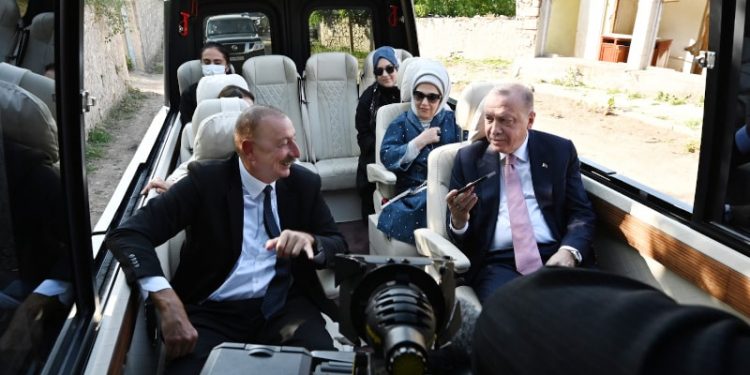 In a statement from the Presidential Communications Directorate, the two leaders spoke on the phone following peace talks between Baku and Yerevan in Brussels hosted by EU Council President Charles Michel.

“The two leaders evaluated the steps to be taken to protect the interests of Azerbaijan and establish lasting peace and tranquility in the region,” the statement read.

The Foreign Ministry also issued a statement on April 8 and welcomed the move by Aliyev and Pashinyan “to instruct their respective foreign ministers to begin the preparations for a peace treaty as well as their agreement on the establishment of a joint border commission by the end of April between the two countries.”

“The Republic of Turkey supports and actively contributes to the efforts for establishing peace and stability in the region,” it added.

Azerbaijan and Armenia have met at the leaders’ level in Brussels to discuss a peace agreement following the war in Nagorno-Karabakh in late 2020 that ended with the victory of Baku.

During the meeting, the two leaders “ordered foreign ministers to begin preparatory work for peace talks between the two countries,” the Yerevan’s Foreign Ministry said in a statement.

“An agreement was reached during the meeting… to set up a bilateral commission on the issues of delimitation of the Armenian-Azerbaijan border, which will be in charge of ensuring security and stability along the frontier,” the ministry added.

Azerbaijan’s Foreign Ministry also said works were underway to begin peace talks, adding that the future peace treaty would be based “on the basic principles proposed earlier by Azerbaijan.”

In a parallel move, Turkey and Armenia are carrying out separate bilateral talks for the normalization of ties and the establishment of diplomatic ties between the two neighbors. The special envoys of the two sides held two meetings, in Moscow and Vienna, while Armenian Foreign Minister Ararat Mizroyan paid a rare visit to Turkey in March. He held a bilateral meeting with Foreign Minister Mevlüt Çavuşoğlu on the sidelines of the Antalya Diplomacy Forum.

Turkey calls on all the Caucasus countries to establish a six-way regional forum for regional peace and stability, including Russia and Iran, as well as Azerbaijan, Armenia and Georgia.