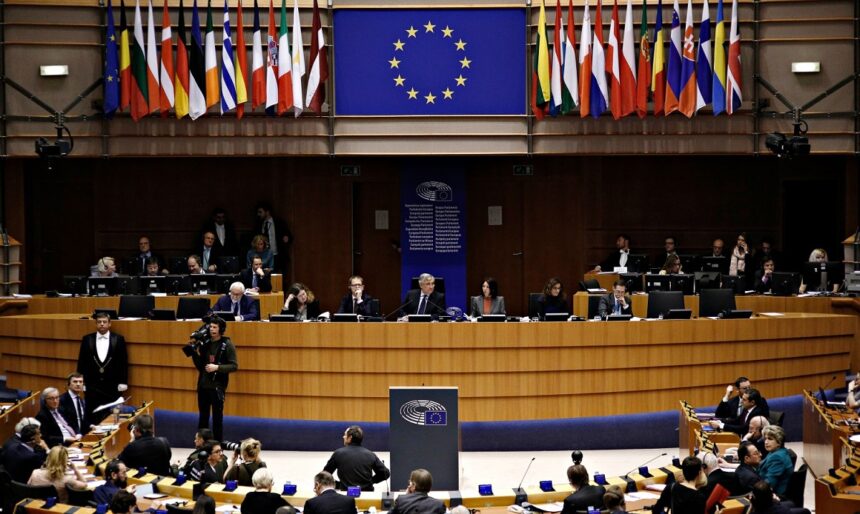 But it is one thing when individuals are biased in private issues and local matters, and quite another when the fate of serious problems is at stake, and those who are supposed to determine the course of important processes indulge in sanctimy.

The resolution of the European Parliament adopted on January 18, 2023 confirmed the unwillingness of some politicians of this institution to be on the right side of history. The document contains a number of blatant anti-Azerbaijani statements, which have nothing to do with objectivity and reality. Some of them are expressly slanderous and inadvertently encourage Armenian revanchism, while Azerbaijan’s efforts are entirely focused on peacemaking.

Since Azerbaijan regained its national independence and once it became a member of the European family, it has constantly faced the bigotry of continental political circles and institutions. Not once in the many years of the occupation of our lands have European institutions bothered to give an objective assessment to the processes taking place in the South Caucasus.

Simply put, the European top brass never called things by their proper names. Therefore, it is not surprising that the uninitiated had the impression that the victim of aggression was the guilty party in the Armenia-Azerbaijan conflict.

Azerbaijan’s victory in the 44-day war has put many things into perspective and sobered up many European politicians, making them realize that Baku has always advocated a peaceful solution to the territorial problem and that the war was the result of Irevan’s intransigence, as the latter continues its malignant policy of hatred to this day.

The resolution of the European Parliament contains references to unjustified rudiments of politics. It is incomprehensible but MEPs still appeal to the “Madrid Principles”, which have taken their rightful place in the dustbin of history as completely useless material.

Until the fall of 2020, Baku tirelessly urged not only the Armenian side, but also the mediators to actively participate in the peacemaking process in order to prevent a military solution to the acute problem. As a result, third powers responded with blatant indifference, and what happened happened. This is why the preposterous claims of the European Parliament about Azerbaijan’s alleged military aggression against Armenia are so bewildering today.

Another monstrous lie is the statement about the “blockade of the Lachin corridor”, also found in the resolution.

The current makeup of the European Parliament is mired in corruption scandals. The crisis is so serious and potentially damaging that the continental justice authorities have sanctioned a detailed investigation. Unscrupulous MEPs are being questioned.

The Greek Vice President of the European Parliament Eva Kaili has nothing to defend herself with against the accusations. She is known for her racist, Islamophobic, Azerbaijanophobic and Turkophobic views. Her passion for double standards has become proverbial, and her blatant bias in decision-making may be due to her Armenophilia.

One thing is clear and needs no explanation: she and politicians like her have long been fond of playing dirty, which is why they were caught red-handed.

We should not ignore the proven fact that the Armenian establishment and its supporters activated the levers of “cognac diplomacy” in European chambers, and it is doing its dirty work, highlighting the contours of unprecedented corruption schemes and the silhouettes of the tainted “heroes”. By what moral right do the people steeped in bribery call on Azerbaijan to follow the letter of justice?

For almost three decades, Azerbaijan waited for the implementation of four UN Security Council resolutions on the de-occupation of its lands and hoped to find understanding and a fair reaction of the European Parliament on the critical issues. However, it invariably held its tongue in a display of Spartan equanimity.

Why is this institution pushing the issue of Armenia’s territorial integrity if Azerbaijan has never made any territorial claims against its neighbor?

President of Azerbaijan Ilham Aliyev, whose efforts made multiculturalism a functional segment of the country’s policy, has consistently exposed Armenia’s false propaganda, as it tried to convince the community that the conflict between the two countries is a civilizational one. The religious factor has nothing to do with the Armenia-Azerbaijan conflict.

This is a proven fact, but MEPs invariably view the vicissitudes of the confrontation through the lens of Christian solidarity.

The bias of the European Parliament in the context of the Armenia-Azerbaijan confrontation is evident in many details and indicators. In the 30 years of occupation of Azerbaijani territories, hundreds of thousands of the original inhabitants of these lands have been subjected to terrible ethnic cleansing. Once flourishing towns and villages of Azerbaijan were razed to the ground for all the world to see. Barbarians and vandals plundered a vast area of 10,000 square kilometers and destroyed all that they could not steal, leaving only ruins.

These egregious facts went unnoticed by MEPs, while a reputable institution could have responded with special resolutions and statements condemning the aggressor.

Another example of the bias of European politicians. Since 2020, after the military campaign ended, up to 300 Azerbaijani citizens have become victims of Armenian mine terror. Irevan still refuses to hand over maps of the minefields to Baku.

Is this not a reason to call Armenia to order and responsibility? Of course it is, but the European Parliament is once again doing nothing.

Under the terms of the trilateral statement of November 10, 2020, Armenia was to withdraw its combat units from the territories of Azerbaijan and to provide a land connection between the western districts of Azerbaijan and the Nakhchivan exclave. Irevan has been shirking these commitments.

Not only has the European Parliament once again remained silent, but it has also unreasonably called on Azerbaijan to “withdraw its troops from Armenian territory”. Is such a prominent pro-Armenian stance of the continental parliament accidental? Certainly not.

The position and “initiatives” of the European Parliament are purposefully undermining the foundations of peace and tranquility in the South Caucasus after Armenia recognized the territorial integrity and sovereignty of Azerbaijan in Prague and Sochi. The flip side of this coin is the encouragement of Armenian revanchism, which threatens not only one country, but the whole region.

The Armenophile stance of the European Parliament also fuels Armenian separatism, which has been a stronghold of radical nationalism and international crime for decades. However, the fate of the region is not decided somewhere far away, but in the South Caucasus, where Azerbaijan plays a leading role in reformatting the situation.

The new status quo has become an encouraging factor that shapes the progressive emergence of post-war realities.

Whatever position the European Parliament takes, it cannot force the winner of the second Karabakh war to deviate from its chosen path. As befits a true leader, Azerbaijan is resolutely steering the processes towards predictability, which meets the interests and expectations of Baku’s neighbors and partners.

This is confirmed by the fact that the EU cherishes its relations with Azerbaijan.

A memorandum of understanding between Azerbaijan and the European Union on energy cooperation was signed during the visit of the President of the European Commission Ursula von der Leyen to Baku in July 2022. At the end of last year, another agreement was signed in Bucharest by the leaders of Azerbaijan, Georgia, Romania and Hungary, outlining the mutually beneficial cooperation between Baku and Brussels in the field of green energy.

The Armenian lobby, represented by a group of Islamophobes and Turkophobes in the European Parliament, is working hard to put obstacles on the path of cooperation between Azerbaijan and the EU—to no avail.

We remember the European Parliament’s opposition to the Southern Gas Corridor (SGC) project initiated by President of Azerbaijan Ilham Aliyev in the past. The pragmatism and political will of the Azerbaijani leader outweighed the capabilities of detractors and enemies of progress.

Time and circumstances have proven the strategic importance of the Southern Gas Corridor for the energy security of the old continent, and this is the case when useless MEPs who cannot see further than their noses are sawing off the branch on which they are sitting.

The anti-Azerbaijani mayhem of the MEPs coincided with the 53rd World Economic Forum in Davos, which brought together the intellectual elite of the world. The Azerbaijani leader Ilham Aliyev was among the participants. No wonder the MEPs chose that moment to surprise Azerbaijan in their typical marginal manner, assuming that they are allowed to do anything they want. That was a miscalculation on their part.

Baku firmly dominates the situation, demonstrating its strategic advantages over the flaccid and feeble position of its incapable adversaries. This arrangement reveals the essence of the collision, which does not bode well for the losers.

The frontrunner has foreseen everything. Those who are not happy with that can just walk away, for the good of all involved.