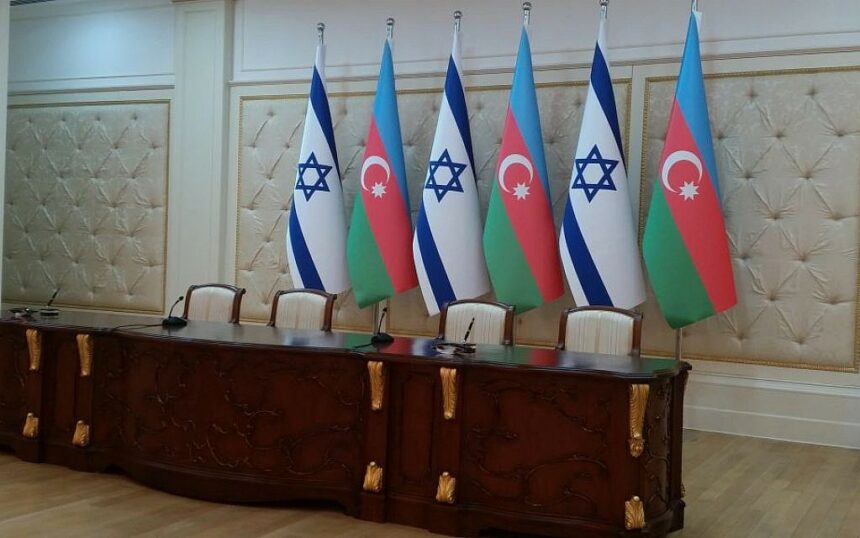 In November, Azerbaijan’s parliament approved a plan to open an embassy in Israel, a milestone in the flourishing bilateral relationship.

The diplomatic upgrade is one of many fruits of a new push by Jerusalem to bolster and expand ties with countries in Central Asia and the Caucasus, Israeli officials say. Sandwiched between Iran, Turkey, Russia, China and the Indian subcontinent, the energy-rich regions sit at key geographical crossroads linking Europe and the Middle East to the Far East.

“We identified an opportunity over the last year,” said Yuval Fuchs, head of the Euroasia and Western Balkans Division at the Foreign Ministry. “There is a meeting of interests.”

These interests revolve around Iran, arms sales, terrorism, and energy.

Though Israel is not the primary player in either Central Asia or the Caucasus, Jerusalem believes that there are unique benefits it can provide to allies that are well-suited to their emerging interests.

From arms sales to embassy

Perhaps the most evident sign of this effort is the blossoming relationship with Azerbaijan, a Shiite Muslim-majority secular country that borders Russia, Georgia, Armenia and — of crucial importance for Israel — Iran.

In a conversation with The Times of Israel on Sunday, Parliamentarian Ramin Mammadov hinted that Baku refrained from opening the embassy in the past because of Iranian threats amid high tensions surrounding its war with Armenia.

“During that period, we had to take into account risks which could be from regional powers and other countries,” said Mammadov, a member of Azerbaijan’s interparliamentary friendship group with Israel. “Nowadays, hopefully, major threats to Azerbaijan’s sovereignty are in the past.”

Azerbaijan emerged victorious in a six-week long war with Armenia in 2020, which claimed the lives of more than 6,000 soldiers and resulted in Baku regaining control over disputed territories.

Tensions with Iran have spiked in the aftermath of the war, with Iran carrying out major military exercises on Azerbaijan’s border and escalating its rhetoric against Baku.

Iran, home to millions of ethnic Azeris, has long accused its smaller northern neighbor of fueling separatist sentiment on its territory.

Days before the embassy vote, Azerbaijan said it arrested five of its nationals for spying for Iran, a week after Baku and Tehran accused each other of hostile statements.

But Mammadov said Baku was no longer taking Iran’s stance into account when considering its deepening ties to Israel.

“It shows there are no obstacles for the two countries, and other countries… cannot be the barrier for these countries,” he said.

A missive recently sent by Azerbaijan’s interparliamentary friendship group to the Knesset emphasized Israel’s support for Baku in the 2020 Second Nagorno-Karabakh War while hailing the “profound affinity and trust between the peoples.”

“The people of Azerbaijan highly appreciate and will never forget the enduring and consistent support by Israel for Azerbaijan’s just position during the 44-day patriotic war,” wrote the lawmakers.

Israel ambassador to Azerbaijan, George Deek, visited the site of a deadly missile attack during the conflict. He told The Times of Israel that the gesture was “a turning moment” in the relationship. A picture of him laying red roses at the site was turned into an iconic image used in videos accompanying songs about the war, Deek said.

“Israel showed we were there with Azerbaijan at a time of need,” he said. “For them, it was proof of a real friendship. It was a hallmark moment in my diplomatic career.”

But Israel’s more tangible support came from the weapons it provided.

Israel is one of Azerbaijan’s leading arms suppliers. According to the Stockholm International Peace Research Institute, Israel provided 69 percent of Baku’s major arms imports from 2016-2020, accounting for 17% of Jerusalem’s arms exports over that period.

Azerbaijan’s location on Iran’s border makes it an enticing ally for Israel. Foreign reports have indicated that Baku likely allows Israel to use bases on its soil to launch reconnaissance flights over Iran and to send intelligence operatives into the country to disrupt its nuclear program. In case Israel does decide to carry out air strikes on Iranian reactors and plants, access to Azeri bases would make that task far more feasible.

In October, then-defense minister Benny Gantz held an official visit to Azerbaijan, where he met with his Azeri counterpart, Zakir Hasanov, and the country’s President Ilham Aliyev.

In 2016, Aliyev said his country had bought $4.85 billion in defense equipment from the Jewish state, but Israel has never confirmed that figure.

In the letter, the Azerbaijani parliamentarians also blasted Iran’s “jealousy” over Azerbaijan’s performance in the war, pointing at the heightened hostile rhetoric from Tehran, and Iranian military maneuvers on its border.

“Azerbaijan has never been afraid of any threats against itself, and is capable of fittingly responding to them,” they assured their Israeli counterparts.

Mammadov said he expects the embassy to be opened “in the coming days.”

“The Israel-Azerbaijan relationship can be a model for regional relations, even global relations,” he said. “This relationship demonstrates that the conflicts today are not between religious or ethnic groups, but between moderates and radicals.”

Across the Caspian Sea in Central Asia, Israel also sees increased opportunity, but making headway there isn’t a given for Jerusalem. The five Central Asian countries — Kazakhstan, Uzbekistan, Turkmenistan, Tajikistan, and Kyrgyzstan — share historical and cultural ties with Russia, China and Turkey, and are doubling down on those connections.

But the ongoing war in Ukraine and local security threats have created openings for Israel in a region that also lies on Iran’s border.

Russia has long been the main player in Central Asia, dating back to the Russian Empire’s conquest of what it called Turkestan in the 18th and 19th centuries. In 1918, the region was divided into five Soviet republics as part of the USSR until it fell apart in 1991, but Moscow has continued to be heavily involved in the region. Russian-speaking elites remain natural partners for the Kremlin in Central Asia.

Three of the countries are in the Collective Security Treaty Organization, a Russian-led military alliance akin to NATO.

However, there are signs that Moscow’s hold has been slipping over the past year. None of the five countries support Russia’s invasion of Ukraine or recognize the Russian-backed breakaway republics there, and all are cooperating with sanctions against Moscow.

Turkey is another natural heavyweight in the region. It shares linguistic and cultural ties with all the countries except Tajikistan, and uses the five-member Organization of Turkic States as its formal coordinating body in the region. With the reputation of Russian arms declining as its forces suffer setbacks in Ukraine, Turkey — especially its drones — is filling the void.

Turkey is also an attractive route to Europe, while Central Asia is an important source of energy for Turkey, which also is working to position itself as the main natural gas hub between Asia and Europe.

China looms on the region’s eastern frontier. Since 2010, Beijing has been Central Asia’s largest trading partner, and rail and road links in the massive Belt and Road Initiative infrastructure project run right through all five countries. To protect those investments — and to take advantage of Russian weakness and the US withdrawal from Afghanistan — China is increasingly involved as a security and weapons provider.

China is also the largest buyer of natural gas from Central Asia.

Iran is also a major player in Central Asia, especially as a commercial partner. It is one of the states — along with Turkmenistan, Kazakhstan, Russia, and Azerbaijan — bordering the Caspian Sea, a key transit point for and source of fossil fuels.

With no outlet to the sea, the Central Asian countries use Iran’s Bandar Abbas as their main port.

Tehran also shares religious and ethnics ties with the region, especially with the Farsi-speaking Tajiks.

Despite the history of mutually beneficial ties, the five countries are seen by some as wary of the Islamic Republic’s designs on the region, creating the seeds of a diplomatic opening with Israel.

“There is something of an uptick in Iranian activity in the region,” an Israeli official told The Times of Israel. “The Iranians are also looking for opportunities there. I would say that the countries are aware of Israel’s concerns.”

Israel maintains three embasses in the region, in Kazakhstan, Uzbekistan, and Turkmenistan. Only Kazakhstan and Uzbekistan have embassies in Israel.

Even with the regional heavyweights throwing their muscle around, Israel is trying to build deeper ties based on shared challenges.

“Of course we have in interest in increasing cooperation and visibility — practical cooperation — with countries that are close to Iran in the neighborhood,” said the Israeli official.

One of the threats faced by both Israel and the five countries is the spread of radical Islam. Domestic terrorist groups have been carrying out attacks since the 2000s, and produced thousands of foreign fighters for the conflicts in Syria and Iraq, including in the Islamic State organization.

The 2021 NATO withdrawal from Afghanistan, and the Taliban’s return to power in Kabul, enhanced fears about jihadist fighters crossing into the Central Asian countries and linking up with local groups.

In December, the Foreign Ministry hosted 24 government officials from the five nations for a study tour focusing on border security and cyber defense.

The trip was organized by the United Nations Office on Drugs and Crime Regional office, based in Uzbekistan.

The officials also paid a visit to the National Cyber Directorate, and were briefed on the police control center in Jerusalem.

The security ties are aided to some extent by the long history of Jews in the region, and by the refuge provided to tens of thousands of Jews fleeing the Holocaust.

“There is a challenge to deepen the relations so they won’t be only based on the past,” Fuchs reflected.

Delegations, such as the one that visited last month, are important part of that effort.

“The idea is that they will go home, will digest everything they saw, will report to their bosses, and will tell us what interests them,” explained Fuchs, “and we will continue from there.”

Lazar Berman is The Times of Israel’s diplomatic reporter