It will be soon reciprocated: pursuing a strategy of pressure on Azerbaijan, the military and economic leader of the South Caucasus region, France risks falling into its own trap. 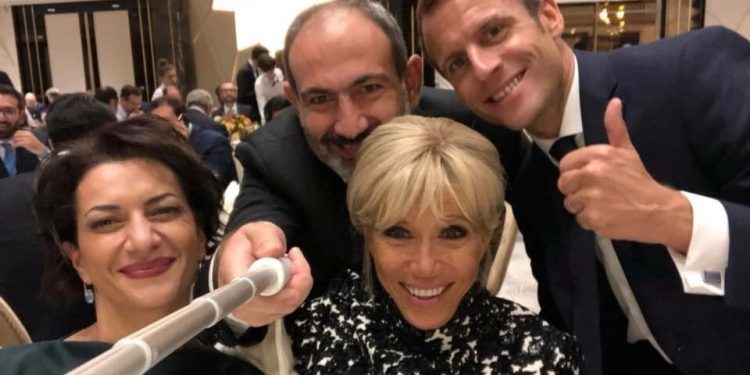 And it is on a tightrope of significant loss of points in the world political ranking. But it seems that Paris, contrary to sound logic, does not understand this. Well, even though Baku did not start the fight, it will respond with dignity, with its own methods to the racist policies of French officials.

So far, however, the French have reached the level of absurdity: on November 15, the Senate of France will discuss a draft resolution on the application of sanctions against Azerbaijan in accordance with article 34-1 of the French Constitution. The authors of the resolution are senators Bruno Retailleau, Christian Cambo, Elian Assassi, Patrick Kanner, Hervé Marcel, and Gilbert-Luc Devinaz. The hypocrisy of the French politicians is on full display in this blatantly racist document – an approach that will surely cost dearly to Paris. Europe’s oldest racist politician decided to unite with Armenian radicalism and terrorism – it seems that Paris and Yerevan indeed have much in common. In fact, both of them have their hands stained in blood and have great experience in killing innocent people. How Paris can live with this frightening legacy and at the same time call for some kind of humanism in other countries, while at the same time accusing them of violating some kind of law is inconceivable.

Why, for example, French officials and parliamentarians did not react in 2020, during a 44-day war, to the shelling of Ganja and more than 80 other settlements of Azerbaijan, the killing of 93 Azerbaijani civilians (including 27 women and 12 children) as a result of missile and mortar attacks by the Armenian armed forces? And now in a new draft resolution, the French Senate accuses Azerbaijan of committing “mass crimes and war crimes” (paragraph 21)?

Let us then also recall the particularly absurd paragraph 20 of the French Senate draft resolution, which calls on Azerbaijan to ensure the right to “the return of (Armenian) displaced persons”. Or the remark in the same paragraph that Azerbaijan should ensure “the preservation of the Armenian cultural and religious heritage”. What then is to be done with the million Azerbaijani refugees expelled by Armenian invaders from their homes during the First Karabakh War and who have yet to return? Back in the 1990s, the UN General Assembly called on countries around the world to effectively support Azerbaijani refugees and displaced people. And where was the French Senate all these thirty years, why didn’t it remember this and demand the return of these unfortunates to their places of residence?

As for the preservation of the so-called “Armenian heritage”, which in fact never existed in the formerly occupied territories of Azerbaijan, the senate has made the same duplicitous maneuver, showing that it is totally uninterested in the way the Armenians have rampaged and destroyed Azerbaijani religious and cultural monuments in the occupied lands for long years. Although these acts of vandalism were recorded by Azerbaijan, and special reports were compiled, not a single French politician has inquired into these documents over the years. This alone makes it clear that there`s no need to speak of any French humanism towards Azerbaijan. On the contrary, it is pure racism. This means they always blame the innocent.

Over nearly 30 years, according to the National Academy of Sciences of Azerbaijan, 215 historical and cultural monuments suffered only in Shusha; only 4 of 67 mosques on the occupied territories have partially survived. Where were you, French parliamentarians, all this time?

French racism, on the other hand, undoubtedly has deep historical roots. There are a lot of events and examples on this subject. And clear parallels can be drawn with our Armenian neighbour. Thus, in 1885, the French Minister of Foreign Affairs Jules Ferry, whose monument is erected in the north-east of the country in his native Saint-Dié-des-Vosges, addressed the MPs with the following words: “It must be said openly that the superior races have rights, unlike the inferior ones, because they have a duty. They have an obligation to bring the inferior races to civilisation”.

Admittedly, the doctrine is not much different from Hitler’s Nazism and Armenian chauvinism. The most interesting thing is that Armenian radicalism, separatism, and terrorism date back to around the same time. The doctrine of Armenian Dashnaks, which recognised the murder of Turks and violence as an acceptable method of political struggle, sprouted its bloody roots at the same time.

And now, French senators accuse Azerbaijan of “mass crimes and war crimes” and call upon their government to “work firmly to have the UN Security Council address the International Criminal Court in connection with Azerbaijan`s aggression on the sovereign territory of the Republic of Armenia”.

Are you serious? And what, in this case, to do with the bloody acts of the French executioners in African countries almost all last century? After all, it was a chain of genocides against the local population. The total number of those brutally murdered by the French military in the African region runs into hundreds of thousands. And no one was held responsible for this until now, which is interesting. Maybe Azerbaijan should remember this on the rostrum of the UN GA because such mass crimes have no statute of limitations, they are strictly condemned for centuries. At least one such trial in the future will be initiated by Azerbaijan, and the Armenian state will be responsible for all the crimes – in Khojaly, Kalbajar, and other Azerbaijani towns and villages.

Speaking of the atrocities of the French “Aryans” – their repentance is still demanded by many countries. As well as punishing France’s hypocritical policy of trying to accuse other states of imaginary “genocides”.

Omer Çelik of Türkiye’s ruling Justice and Development Party (AKP) criticized French President Emmanuel Macron’s statement on the establishment of a “memorial day” in the country for the 1915 events.

“We condemn Macron’s decision, which relies on unfounded speculation about the events that took place in the Ottoman state in 1915,” Çelik wrote on Twitter.

He said Macron should pay attention to his own country’s history, particularly France’s actions during the colonisation of Africa. “France, which claims to be addressing history, should first recall the crimes against humanity committed in Benin, Burkina Faso, Cameroon, Chad, Gabon, Guinea, Mauritania, Niger, Senegal, and Tunisia,” Çelik wrote.

The Turkish politician stressed that “the step taken by Macron in favour of political interests is an obstacle to dialogue… Türkiye will never recognise this decision and strongly condemns it.”

The French leadership’s blatant Nazi anti-Azerbaijani stance was particularly evident during and after the Second Karabakh War. The Senate draft resolution put forward for a vote on November 15, 2022, is a direct continuation of this policy.

Even during the war, the French media began to accuse Azerbaijan of committing “war crimes”. And things got even more interesting: in the second half of October 2020, representatives of the French establishment began to present Azerbaijan and their own pro-Armenian position in the context of the global inter-religious confrontation between Islam and Christianity. On October 19, 2020, Senator and Deputy Secretary General of the centre-right Republican Party Boyer wrote on her Twitter account: “To oppose the promotion of Azerbaijan in Nagorno-Karabakh also means to oppose the spread of Turkish Islam in Europe. As French philosopher Onfrey told the online publication Valeurs, for him ‘this is the first battle in the civilisation war that Erdogan’s Islamist imperialism, among other leaders, is waging against the hated Judeo-Christian civilisation…'”

He went on to add that “what is happening in Armenia must be linked to the attacks that have been piling up on European soil for decades.”

Thus, we can see that contemporary French policy is based on very similar terms to the Armenian policy of ideological superiority and chauvinism. At the same time, there is a clear objective of the French leadership to gain a foothold in the South Caucasus, to minimise or completely deprive Azerbaijan and Türkiye of influence there through a consistent system of measures directed against the Turkic peoples and states. And this strategy is global and well thought out.

The activation of Paris and its destructive actions now are also related to the fact that France is trying to use the right moment – the weakening of Russia and its involvement in the war with Ukraine. Based on this strategy, Paris has recently markedly changed its tactics by launching political attacks on Moscow. For example, the French president recently accused Russia of creating chaos and turmoil in the Caucasus, completely denying Russia’s peacebuilding efforts and extolling its own. France’s devious and hypocritical game is very transparent. Paris’ anti-Turkish alliance in the Mediterranean region, where it is trying by all means to limit Ankara’s influence, can also be added. Racism, as one of the levers France uses today, is particularly evident here.

France’s support for Armenia, including speculation about the prospect of military assistance, is on a par with its support for Greece in its confrontation with Türkiye. In September, French foreign minister Colonna made it clear that her country would stand with the Greeks in the event of a renewed Turkish-Greek military conflict: “France has said so, and I repeat that it will stand with Greece and Cyprus if their national sovereignty is threatened.” And then Macron also reiterated this position, noting the importance of a military partnership with Greece. Now the French senate is promoting an embargo on gas and oil imports from Azerbaijan to EU countries – and this is despite the fact that Greece is one of the main importers of Azerbaijani gas (about 20% of total imports).

However, Paris’s blatantly dirty games run the risk of falling into its own trap. And the consequences of such actions can already be seen now. The other day, President Ilham Aliyev unambiguously showed France the door, making it clear that Azerbaijan no longer views Paris as an international mediator and peacemaker. And this is a serious blow to the French presence in the region, where most economic and political initiatives belong to Baku. And the petty, primitive counting on support for Armenia is probably the only thing that Paris can afford today, as it cannot oppose anything adequate to the alliance of global cooperation that Azerbaijan, together with Türkiye, Georgia, and Russia, forms in the region. Having been almost kicked out of this format, and having shortsightedly supported a rogue state such as Armenia, France is deservedly and expectedly one of the political outsiders in the region as a result of its toxic policies.