Late autumn 1991. The USSR is bursting at the seams. Countries one after another declare their sovereignty. No one doubts that the Soviet Union is living out its last days. 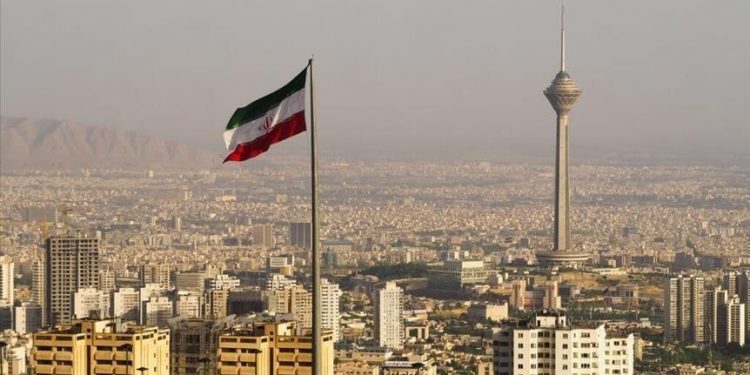 Azerbaijan, which has been facing the Union Center’s indulgence of Armenia’s aggressive policy for more than three years, restored its state independence on October 18. The first countries to recognize Azerbaijan’s independence were Türkiye (November 9), Romania (December 11), and Pakistan (December 13). It would seem that our southern neighbor, Iran, with which Azerbaijan is connected not only by neighborhood, but also by culture, religion, and history, should also have been among them. But it was not.

On November 27, Azerbaijan was surprised to learn that Iran has no intention of recognizing the independence of our state. At that time, at the dawn of Azerbaijan’s independence, Ali Akbar Velayati, then foreign minister and adviser to the Supreme Leader of Iran, unequivocally declared it in an interview with Russia’s “Ekho Moskvy” radiostation.

“We do not intend to recognize the independence of Azerbaijan. Relations with this republic will develop within the framework of the Soviet Union,” Velayati said.

Curiously, the Iranian diplomat announced the intentions of the Iranian side to develop relations with Azerbaijan within the framework of the Soviet Union on the eve of his trip to the Muslim republics of the former Soviet Union, including Azerbaijan. Of course, such a categorical position of Tehran on Baku was an unpleasant surprise for our country. Let us repeat: as its closest neighbor and due to its cultural and historical proximity, Azerbaijan counted on Iran’s solidarity on this issue of principle importance to it. But it has received this support only from Türkiye, which to this day remains a staunch supporter of its efforts to preserve territorial integrity and inviolability of borders. 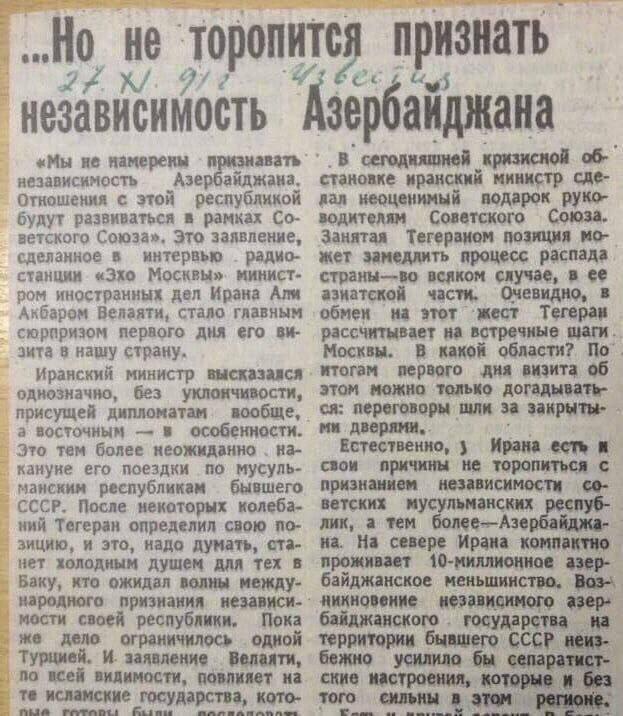 As for Iran, it recognized Azerbaijan’s independence in fact on the day of the official collapse of the USSR – December 25, 1991, when Gorbachev resigned from his post as president, the Russian flag flew over the Kremlin instead of the red one. That is, Tehran dragged out the recognition of Azerbaijan until the day when it made no sense to delay any further.

At the same time, if we compare Iran’s previous policy with the current one, it is obvious that it has always pursued a far from balanced policy towards Baku, which has often led to serious disagreements in bilateral relations. Meanwhile, Azerbaijan, which has been pursuing a balanced policy in the international system of coordinates in general and in regional politics in particular since 1993, has repeatedly used tools of political diplomacy, ironing out difficulties in its relations with Iran. Even despite this, it happened that the hostile attitude of Tehran (groundlessly) contributed to the undermining of the trust of official Baku. It is enough to recall the accusations from the Iranian side that Baku could allegedly provide the US with an opportunity to attack Iran. Every time Baku has proved that such groundless accusations are contrary to the state policy of Azerbaijan.

Another important point is that despite frequently changing officials in the country’s government, Iran’s foreign policy priorities have remained intact for years. This was graphically illustrated by Iranian-Armenian relations. Iran has always supported Armenia as a regional ally, providing it with all kinds of economic support. Moreover, Yerevan continues to count on Tehran’s help to this day. To put it mildly, Baku is not happy with Tehran’s policy towards Armenia, but it is not trying to dictate the rules of regional diplomacy and the laws of international law.

It would seem logical for Iran and Armenia to adhere to this policy. But they are known to implement a far from consistent policy towards their neighbors in the region, first of all towards Azerbaijan. There is a clear similarity between the positions of Armenia and Iran, and there are a number of examples that confirm this. Here is one of them. Iran sees a threat in Azerbaijan’s purchases of weapons from Israel and does not hide its displeasure over this. Why should it be so? First of all, Azerbaijan has a right to buy arms from anyone it wants. Secondly, Israeli arms are by no means directed against Iran, and that is the main argument that Baku appeals to with both words and actions.

On the other hand, one of the determining factors in Iranian-Azerbaijani relations is Tehran’s position in the Karabakh conflict. It is known that before it was resolved, Iran formally held a neutral position in Armenian-Azerbaijani relations. But in September 2020 (during the Second Karabakh war) the facts confirming that Iranian cars were delivering fuel to the occupied Karabakh were made public. There is more to come. In winter 2020, footage emerged of Iranian trucks delivering fuel and food to Karabakh without Baku’s permission. Later, the Iranian side tried to deny this footage, accusing Armenians, who want to drive a wedge into Iranian-Azerbaijani relations, of falsification. Nevertheless, it was evident that the footage was fresh.

Considering all these episodes, it can be concluded that Iran, positioning itself in words almost as a friend of Azerbaijan, in fact, by providing Armenia with opportunities to obtain weapons and military equipment through its territory, put relations with Baku under real threat. Which also does not add a positive image to Tehran. On the other hand, which is also impossible to miss, the rhetoric of the statements that were voiced in Tehran after Azerbaijan’s victory in the 44-day war in 2020 has changed markedly. The same ex-Minister of Iran, and now an adviser to the Supreme Leader on international affairs Ali Akbar Velayati (who at one time unequivocally questioned the recognition of Azerbaijan’s independence) said that the occupied Azerbaijani lands had to be liberated and that the Azerbaijani people did it.

Undoubtedly, Velayati’s “heartfelt” recognition is a diplomatic victory for Azerbaijan, which all regional neighbors, including fastidious Iran, had to put up with one way or another. In the same context, further Iranian-Azerbaijani relations and, most recently, Velayati’s statements that Iran and Azerbaijan share a common history and religion are inspiring.

In conclusion, one more important fact should be noted concerning the growing day-by-day relations between Azerbaijan and Türkiye. It is obvious that this fact is a source of concern for our regional neighbors, including Iran. That is why Baku is completely satisfied with the relative warming in the Iran-Türkiye relations that has been observed lately. In any case, this is indicated by the meetings of the heads of the two states, the last of which took place in Tehran.

Despite the existing contradictions around the regional conflicts in Syria, Libya, and the Middle East in general, it is obvious that against the backdrop of current global processes, regional powers are consistently changing their foreign policy guidelines, building a new system of international relations. Türkiye plays a key role in this regional chain of relationships, with which such strong states as Iran and Russia are trying to build close relations, and this is directly in the interests of Azerbaijan. Considering that official Ankara fully shares the essentially important priorities of the state policy of Baku, it is quite logical that the brotherly Türkiye has become a true strategic ally of Azerbaijan and not inconsistent Iran. All it had to do was to recognize Azerbaijan as one of the first, not to interfere in our internal affairs, and not flirt with aggressive Armenia…